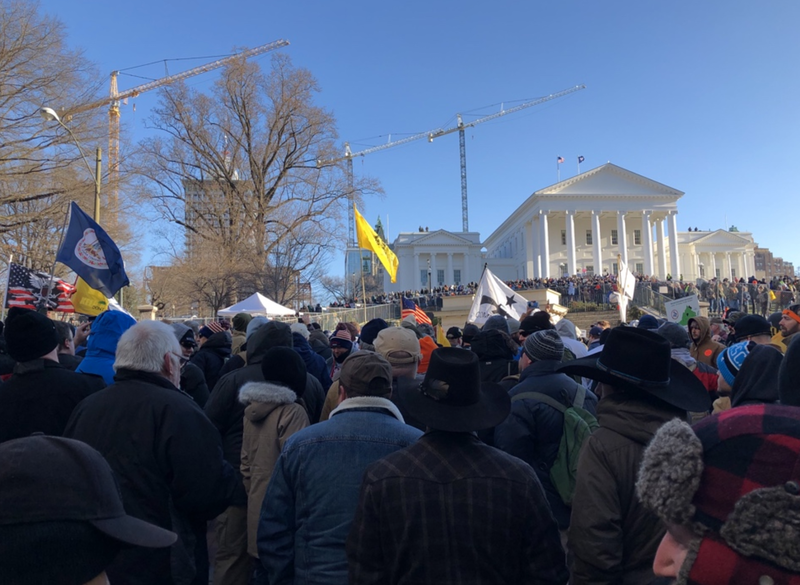 Virginia’s annual “Lobby Day” pro-second-amendment demonstration will be noticeably larger this year, thanks to the fact that the Democrats who control Virginia’s governorship and both houses in the General Assembly are plotting sweeping gun control legislation that could include red flag laws, limits on handgun purchases, universal background checks and a draconian assault weapons ban.

As we reported over the weekend, tens of thousands of demonstrators are expected to show up this year, far outnumbering the typical turnout of the annual gathering.

In response, Gov. Ralph Northam last week declared a state of emergency banning guns in Capitol Square for fear that thousands of militiaman would storm the capitol. Police have scoured the web looking for evidence of violent plots among the many conservative groups who planned to attend, including several armed militia groups. Last week, the FBI arrested several alleged white supremacists for threatening acts of violence at the rally. Meanwhile, the state and the Feds are doing everything in their power to try and prevent another Charlottesville.

Just as the 11 am rally was set to begin, President Trump fired off another message of support and advised demonstrators to vote Republican in 2020.

Already, thousands of demonstrators had gathered outside Capitol Square (where police have limited entrance points to create long lines for demonstrators) in Richmond, many wearing camouflage and carrying messages of support for President Trump.

While the event’s organizers insist that Lobby Day is intended to be a peaceful demonstration and that hate groups simply aren’t welcome, members the mainstream press, including the AP, are already painting it as overwhelmingly white and male, in furtherance of their narrative that the event was intended as a haven for white supremacists from around the country.

Over the weekend, a reporter at NBC News decried the rally as a white supremacist event, before swiftly deleting their tweet, as the Daily Caller reminds us.

Teenage gun control activist David Hogg blasted the “white supremacists and nazis” who showed up to the event.

But as they prepared to march, some black Americans who have chosen to participate in the rally have taken umbrage at these unsubstantiated claims of white supremacy.

Is this one of those white supremacists NBC was talking about? #VirginaRally https://t.co/rgD57QKvVX

Though guns have been banned inside the capitol grounds thanks to a state of emergency declared by Gov. Ralph Northam, thousands waiting outside the cordoned-off area are open carrying and hopefully scaring the bejeezus out of any would-be counter protesters.

Even left-wing journalists covering the rally were surprised by the size of the crowd in the hours before the demonstration’s official start.

Richmond 2A crowds are absolutely enormous. Thousands of demonstrators arrived by 9am pic.twitter.com/v28O9uJvrV

I’m at today’s gun rally in Richmond, which has drawn Second Amendment activists and fringe far-right groups. So far, roughly a couple hundred people are here in and outside the state capital area. pic.twitter.com/K8eSk9CwjC

Though the governor and at least one top Republican asked ‘far-right’ groups (including militias) to stay away from the event, some armed groups paraded up and down outside the capitol.

This group, at least some of whom are militia affiliated, has been parading up and down the streets next to the gun rally. pic.twitter.com/HSN7IpkvQU

Indeed, videos of armed groups flooded Twitter, accompanied by Liberal journalists whining about how these white militia men are better armed and therefore more than dangerous than the migrants and asylum seekers crossing the border.

Several pro-2A groups petitioned a judge to try and overturn Northam’s state of emergency banning guns on capitol grounds, but the judge refused, claiming the right to bear arms is “not without restrictions”.

The arrest of alleged white supremacists planning to participate in the rally has also further inflamed tensions between the state government and pro-carry groups.

Though most of the demonstrators who chose to carry selected commonly used firearms, one man attracted attention and derision after bringing a 50 cal to the protest.

Monday’s rally was organized, as the ‘Lobby Day’ protest is every year, by the Virginia Citizens Defense League. The issue of gun control was a key factor in Virginia’s 2019 statewide elections, and Democrats running in the state attracted considerable support from donors across the country.

But the gun control push has sparked an unprecedented backlash, prompting dozens of municipalities to actively consider “2A sanctuary” legislation that would effectively invalidate state laws.

Kem Regik, a 20-year-old private security officer from northern Virginia, brought a white flag with a picture of a rifle captioned, “Come and take it.”

“I don’t like what the legislature is doing and I’m here to let them know that,” he said.

Jesse Lambert was dressed in mix of colonial era minute-man garb and cargo pants, with an colt rifle strapped across his back. He said he traveled from Louisiana to show opposition to the gun control bills. He said their efforts would unfairly punish law-abiding gun owners, particularly those who own AR-Style rifles.

“These are your average common people carrying firearms that are in common use,” he said.

For anyone who couldn’t make it to the rally, but would still like to experience a taste of what it’s like out there, Ruptly has posted a live feed. Watch below: