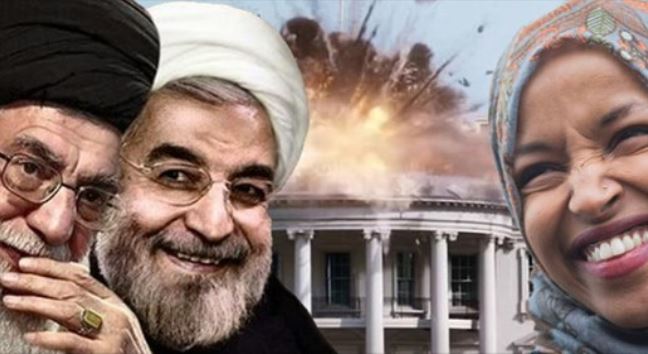 OPINION| Mark Sidney| Ilhan Omar may have just tipped her hand, in my view, and that of many other Americans, as being an asset of a hostile foreign power.

Before we get into the insane Tweet she sent out this morning, ahead of Iranian strikes on US bases in Iraq, mind you, let us recall the recent allegations against Ms. Omar.

If you recall Alan Bender, a Canadian businessman, gave a sworn deposition, in a Florida court, in which he stated that Ms. Omar, was in fact compromised, and acting on behalf of Qatar.

At the time, The Washington Examiner ran a story entitled ‘Ilhan Omar a ‘Qatari asset’ who passed secrets to Iran, Florida court told’

Now, it is important to realize that, as of now these are just allegations, so let’s just look at her Tweet today with them in the back of our minds.

Does that sound like a threat, or a suggestion, or both, to you?

Now, who is the winner is in all this … IRAN.

I understand not wanting an open war that encompasses the entire Middle East, that is a reasonable view, one which I happen to share.

However, it is a completely different thing to be working against the President and hinting to our enemy, ways to attack and weaken our nation and it’s leader.

It fact it is worse than that, Omar’s insinuation threatens stability … GLOBALLY.

@realDonaldTrump If I didn't know any better, @Ilhan is Telegraphing a threat. Using innocent civilians as threat to blackmail and hog tie the executive office? House Intel?

Again, I understand being against open hostilities with Iran, what I do not accept is the Democrats seemingly, growing desire to ally with the Islamic Republic of Iran over our own nation, a nation which they swore to protect.

This is not the first piece of evidence suggesting that Democrats were siding with Iran over our own Executive branch and military.

The Gateway Pundit pointed out that ‘Democrats blasted President Trump over the killing of the world’s number one terrorist.’ Think about that for a moment, the Democrats are mad at Trump for killing a man who is allegedly responsible for the death of US soldiers and countless numbers of HIS OWN countrymen.

Hoft went on to suggest that Omar ‘… truly is the enemy within.’

While we do not know if Alan Bender’s accusations are in fact true, what I can tell you is that with each action she takes, Omar becomes more and more suspect to me.

The worst part is that it is not just her, it is the entire Democrat Party…