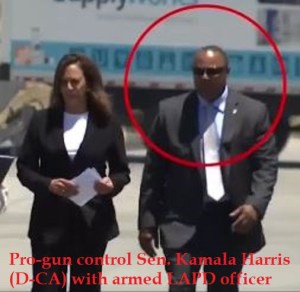 Kamala Harris, 54, is a first-term U.S. senator for California.

A week ago on January 21, 2019, she officially announced her campaign to run for the Democratic nomination for President of the United States in the 2020 United States presidential election. In the first 24 hours, her campaign already raised $1.5 million in mostly small contributions.

Her announcement renewed questions about how Harris got her start in politics.

According to Wikipedia, in 1993, 31 years younger and fresh out of law school, Kamala Harris began “dating” California Speaker of the Assembly Willie Brown, “who introduced her to many powerful individuals in the California and Sacramento political and campaign management establishment.”

Brown later became a two-term mayor of San Francisco. In Willie Brown: A Biography, p. 404, James Richardson writes that Kamala Harris was Willie Brown’s “girl friend” although he was — and still is — married to his wife Blanche Vitero.

More than introducing her to powerful people in politics, the Washington Free Beacon points out that Brown also appointed Harris to two well-paid state commission assignments on the Unemployment Insurance Appeals Board and the California Medical Assistance Commission. SF Weekly reported back in 2003 that the two positions earned her more than $400,000 over five years.

In his weekly column in the San Francisco Chronicle last Saturday, January 26, 2019, Willie Brown admits to his adulterous affair with Kamala Harris in a casual “what’s the big deal?” demeanor. He writes:

Elephant in the room: I’ve been peppered with calls from the national media about my “relationship” with Kamala Harris, most of which I have not returned.

Admitting that “I may have influenced her career by appointing her to two state commissions when I was Assembly speaker. And I certainly helped with her first race for district attorney in San Francisco,” Brown then breezily dismisses his nepotistic patronage, saying “I have also helped the careers of House Speaker Nancy Pelosi, Gov. Gavin Newsom, Sen. Dianne Feinstein and a host of other politicians.”

Are we to think that Pelosi, Newsom and Feinstein also screwed Willie Brown into politics?

Brown’s admission that he had an adulterous affair with and “assisted” Kamala Harris into politics may just the beginning of the airing of her dirty laundry.

Then there is the matter that Harris is not a “natural born” U.S. citizen. Nor is she an African-American.

Kamala Harris’ parents are both immigrants:

Since Kamala was born in Oakland, California on October 20, 1964, neither of her parent would have been a U.S. citizen at the time. That makes Kamala Harris not a “natural born citizen,” according to the most scholarly interpretation of Section 1 of Article Two of the U.S. Constitution.