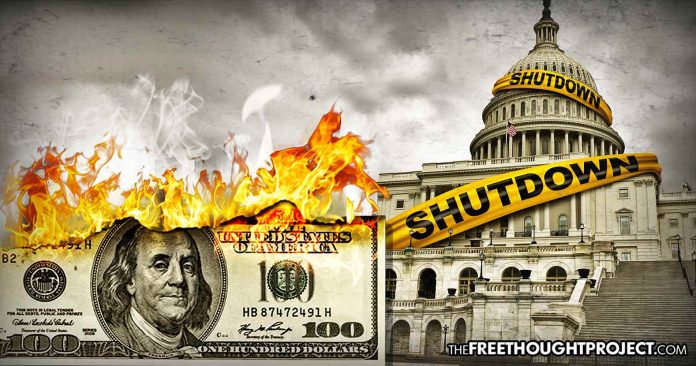 Trash overflowed at national parks, roads were neglected, routine maintenance ignored, and volunteers were forced to step up and do the government’s job for them. Ironically enough, the shutdown barely even curbed government spending. As 800,000 government employees sat furloughed and large sections of the state shut down, the feds only decreased spending by just under seven percent.

What’s more, highlighting the absurd nature of the shutdown, the resultant costs caused directly by the left and the right’s refusal to agree—were twice as much as Trump’s wall.

That’s right. This partial government shutdown, which dragged on for 35 days, cost the US economy an estimated $11 billion, according to an analysis from the Congressional Budget Office (CBO). This number happens to be just under double the $5.6 billion Trump had requested for the border wall.

As the report notes:

As a result of reduced economic activity, CBO estimates, real (that is, inflation-adjusted) gross domestic product (GDP) in the fourth quarter of 2018 was reduced by $3 billion (in 2019 dollars) in relation to what it would have been otherwise. (Such references are in calendar years or quarters unless this report specifies otherwise.) In the first quarter of 2019, the level of real GDP is estimated to be $8 billion lower than it would have been—an effect reflecting both the five-week partial shutdown and the resumption in economic activity once funding resumed.

Although the CBO says that much of this money will be recovered, they estimate that at least $3 billion is gone forever.

For 35 days, the blowhards in D.C. argued in their marble buildings—all while actually getting paid for it—over a wall. While claiming to have the citizens’ best interests in mind, their failure to agree over a $5.6 billion wall, actually robbed Americans nearly double that amount. Government at its finest indeed.

This madness is far from over too. Democratic leaders Chuck Schumer and Nancy Pelosi have vowed never to allow Trump to build a wall. This was even after a major concession from Republicans that granted a three year amnesty for DACA recipients already in the US.

In a little over two weeks, the boneheads will clash again over how to best spend the money they take from your paycheck each week. Because neither of them intend to back down from their pulpits, it is likely that another shutdown will ensue on February 15.

It seems that Trump has a work around under his sleeve in which he plans on going forward with a wall by labeling it a national emergency. However, we warn those who may be on board with such a move to understand what that means.

The government has been planning and preparing for such a crisis for years now.

No matter that this crisis is of the government’s own making.

To those for whom power and profit are everything, the end always justifies the means.

This latest brouhaha over President Trump’s threat to declare a national emergency in order to build a border wall is more manufactured political theater, a Trojan Horse intended to camouflage the real threat to our freedoms: yet another expansion of presidential power exposing us to constitutional peril.

This is not about illegal immigration or porous borders or who will pay to build that wall.

This is about unadulterated power and the rise of an “emergency state” that justifies all manner of government tyranny in the so-called name of national security.

If government was truly concerned about the ostensible national security risk posed by an open border then they would stop their foreign policy of creating refugees by meddling in South and Central American countries. This would be magnitudes more effective than a wall and it would save American billions.

If you think that these people are fleeing their countries, leaving behind their families and homes, just to come to the US to get “free stuff,” think again.

Starting under Ronald Reagan, the US has been funding extremist military regimes who’ve carried out mass murder, kidnappings and tortures in El Salvador, Guatemala, and Nicaragua.

US-backed military coups, exploitation of resources, and America’s history of spreading economic neoliberalism in El Salvador have sent the entire region into chaos—just like what happens in all the countries who’ve been unfortunate enough to receive some “freedom” from the US. What’s more, it’s effectively created a climate where paramilitary-aligned drug cartels can and do thrive.

These same tactics are now coming to a head in Venezuela.

Even the infamous MS-13 gangs, so often mentioned by Trump, are a direct result of Bill Clinton’s administration’s policy.

“This is a problem that’s American made through and through, so to treat it as though it’s some external threat being foisted on America obscures the fact that it’s our foreign policies, our military intervention, and our long history that created MS-13 in the first place,” Daniel Denvir, writer-in-residence at Harvard Law School’s Fair Punishment Project, told Democracy Now, summing it up succinctly.

Couple this foreign intervention with America’s war on drugs, and we have the perfect storm for the current refugee crisis. Contrary to what your TV is telling you, no one walks 3,000 miles with no military or training to “invade” another country, nor do they leave behind their homes and risk kidnapping, death, or worse to seek out some version of the American dream. They leave because they have no other choice and no wall will stop that—only a dramatic shift in US foreign policy will.

So, remember this in just under three weeks when the government shuts down again or Trump declares a state of emergency and we have the imminent threat of martial law—these people in Washington couldn’t care less about making you safer or protecting this country. Their job is to seek power, obtain that power, and expand that power by any means necessary, up to and including, fleecing the US economy in a dramatic act of political theater to keep us all fighting for scraps.