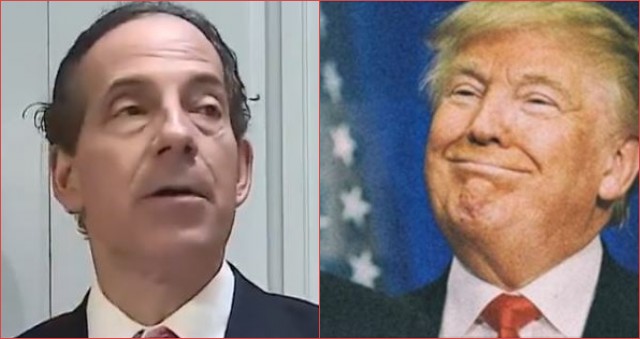 Congressman Jamie Raskin raised the possibility that President Trump could be indicted on fraud and bribery charges after he leaves office.

Raskin, who plotted the impeachment of Donald Trump even before his inauguration, alluded to that possibility while testifying at Tuesday’s House Rules Committee impeachment meeting.

He countered Republican arguments that neither of the two articles of impeachment actually included crimes such as fraud or the poll-tested phrase ‘bribery.’

Raskin (D-Bad Hair) explained those arguing that the articles of impeachment are invalid because they don’t include any real ‘crimes’ amounts to an argument of “heads I win, tails you lose.”

Dem. Rep. Jamie Raskin: “Mr. Chairman, we present you not just with high crimes and misdemeanors—but a constitutional crime in progress, up to this very minute.”

Dem. Rep. Jamie Raskin: "Mr. Chairman, we present you not just with high crimes and misdemeanors—but a constitutional crime in progress, up to this very minute." https://t.co/FSKRPsJV7d pic.twitter.com/Slh0VmBbrf

Raskin’s words might appear to be the ramblings of an unwell man to most people, but he should be taken quite seriously as the fringe extremists continue to take over the Democrat party.

He’s been calling for impeachment from the onset.

In fact, prior to President Trump’s inauguration day, Raskin had impeachment on the brain.

“I just know that if I’m going to vote to impeach the man at some point, I would like to be able to look him in the eye on Inauguration Day,” he said when asked if he planned on attending the event.

Raskin has also been a strong proponent of invoking the 25th Amendment as a means to remove the President from office.

Raskin’s comments are just another in a long line of evidence that the resistance party has no intention of stopping the perpetual harassment of this President.

“Would you be inclined to take a second bite at the apple and reintroduce the exact same impeachment articles and then send it through again a second [time] if you have a Democratic Senate on your side?” Levin asked Bass.

“Yes, but I don’t think it would be exactly the same and here’s why,” she replied. “Because even though we are impeaching him now, there’s still a number of court cases, there’s a ton of information that could come forward.”

“The committee has continued and will continue [its impeachment] investigations consistent with its own prior statements respecting their importance and purposes,” House General Counsel Douglas Letter wrote.

The investigations will continue. They plan to impeach again if Trump wins. They want to see indictments when he leaves the White House.

The Presidential harassment is never going to end unless the American people return the House of Representatives to the Republican party in 2020.

This article was originally published at The Mental Recession and was republished with permission.