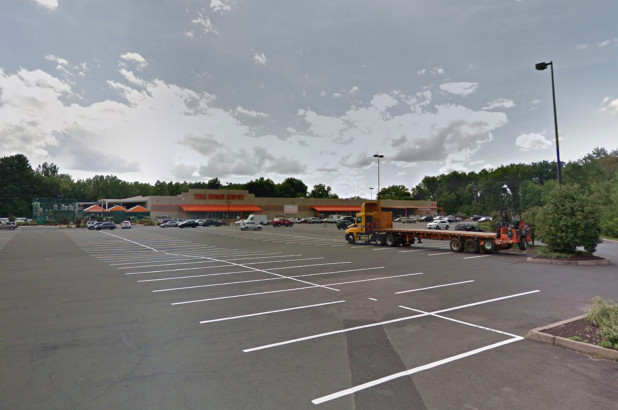 Halal slaughter in a public parking lot, while a kid witnesses a cow getting its throat cut – something that non-Muslims apparently need to get used to, judging by the account

“Suddenly, Musaed whipped out a foot-long knife and slit the cow’s throat as other Saba employees wrangled the animal. The officer was stunned over the disturbing act.
“You know this is a big — this is a problem. This is not something that can be done,” the cop said.

How many years will that kid have nightmares? Respect it!

The gory scene prompted the closure of the Saba meat store in Bloomfield, which kept livestock on its premises to be prepared in accordance with Islamic law, NBC Connecticut reported.

The cow dashed out of Saba on Saturday and ran across the street to the hardware store — with employee Badr Musaed and a contractor Andy Morrison hot on its trail.

Morrison, who was doing renovation work at the meat store and was armed with a bow and arrow, tried to help Musaed corral the cow while the local police also responded.

Dash camera footage obtained by NBC shows the officer trying to box the bovine in with his cruiser — and Morrison attempting to shoot it with his weapon.

“As the cow ran towards the employees, Morrison shot at the cow, however he missed and the arrow struck the wall of the Home Depot,” the police report said.

Suddenly, Musaed whipped out a foot-long knife and slit the cow’s throat as other Saba employees wrangled the animal.

The officer was stunned over the disturbing act.

“You know this is a big — this is a problem. This is not something that can be done,” the cop said, according to the recording.

A Saba employee replied, “We try to do our best, you know,” to which the officer responded, “OK, but you guys get, like, you get a leash … this kid here just watched you slit a cow’s throat.”

“They come in our store all the time,” the worker said.

“OK, but we’re not in your store right now,” the officer answered. “You’re in the back of Home Depot.”

Musaed was ticketed for creating a public disturbance. Morrison was told by police that he, too, would’ve been charged had there been more people in the area when he tried to shoot the cow.

The police report indicated that neither he nor his coworkers appeared remorseful.

Soon after, Saba was shuttered for various violations after local, state and federal agencies investigated.

No one answered the door at Saba when NBC knocked for a comment.

Neither Morrison nor Musaed responded to calls from the network.