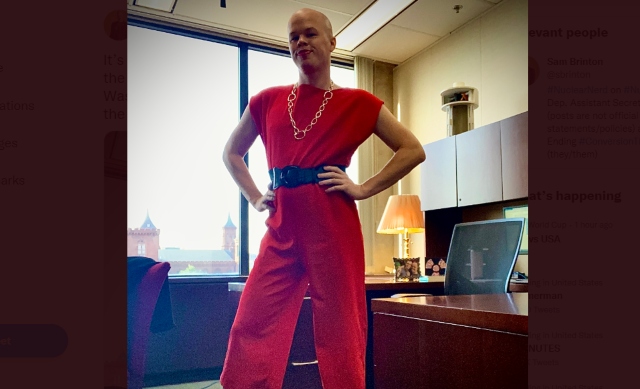 (Natural News) A Biden administration Energy Department official who has generated no shortage of controversy is in legal hot water and facing a felony count of theft.

According to Alpha News, the official, Sam Brinton, an MIT graduate now serving as the deputy assistant secretary of the Office of Spent Fuel and Waste Disposition in the U.S. Department of Energy, and has a history as a “gender-fluid” individual and transgender activism, allegedly stole a woman’s expensive luggage at the Minneapolis-St. Paul International Airport in September.

He went viral earlier this year when he took to Twitter to announce his new role.

“As one of if not the very first openly genderfluid individuals in federal government leadership, I was welcomed with open arms into the Department of Energy all the way up to the Secretary whom I shared the stage with in a Pride month celebration panel just today,” he wrote at the time.

It’s official. As of June 19th, I now serve my nation as the Deputy Assistant Secretary for Spent Fuel and Waste Disposition in the Office of Nuclear Energy in the Department of Energy. pic.twitter.com/zLq3Bf97X2

According to the outlet:

Law enforcement at the Minneapolis-St. Paul (MSP) International Airport were alerted to a missing suitcase in the baggage claim area on Sept. 16. The adult female victim said she flew into MSP on a Delta flight from New Orleans and went to retrieve her checked bag at carousel seven.

Airport records confirmed the navy blue Vera Bradley roller bag arrived at 4:40 p.m. but was missing from the carousel. So law enforcement reviewed video surveillance footage from the baggage claim area and observed Brinton removing a navy blue roller bag from carousel seven, according to a criminal complaint.

The complaint says Brinton removed a luggage tag from the bag, placed it into a handbag he was carrying, and “then left the area at a quick pace.” Brinton arrived at MSP Airport around 4:27 p.m. on an American Airlines flight from Washington, D.C., but did not check a bag, meaning he had no reason to visit baggage claim, according to the complaint.

Police reportedly showed the surveillance video to the victim, who confirmed that the luggage belonged to her. All told, according to the complaint, the victim said the bag and its clothing contents were worth more than $2,300.

“Brinton left the airport in an Uber for a stay at the InterContinental St. Paul Riverfront hotel, where he checked in with the blue bag, the complaint says,” Alpha News reported, adding that he returned to the airport on Sept. 18 with the bag and boarded a flight to Dulles International Airport in northern Virginia.

After being contacted by police about the bag Oct. 9, Brinton was asked if he “took anything that did not belong” to him.

“Not that I know of,” he said in response, admitting that he did take the bag but that the clothes inside were his.

“If I had taken the wrong bag, I am happy to return it, but I don’t have any clothes for another individual. That was my clothes when I opened the bag,” he added, according to the complaint.

But a couple of hours later, Brinton phoned police with an apology, saying he had not been “completely honest” beforehand. He amended his story, the complaint stated, saying that he was tired and he took the bag thinking it was his. Again, records show he never checked a bag on his flight, to begin with.

Worried that people would accuse him of “stealing the bag,” he said he “got nervous” and left the clothing that was inside the bag in his hotel room. Police later learned, however, that no clothing was left behind.

Brinton was charged with felony theft and is scheduled for a Dec. 9 court hearing in Hennepin County, Alpha News reported.