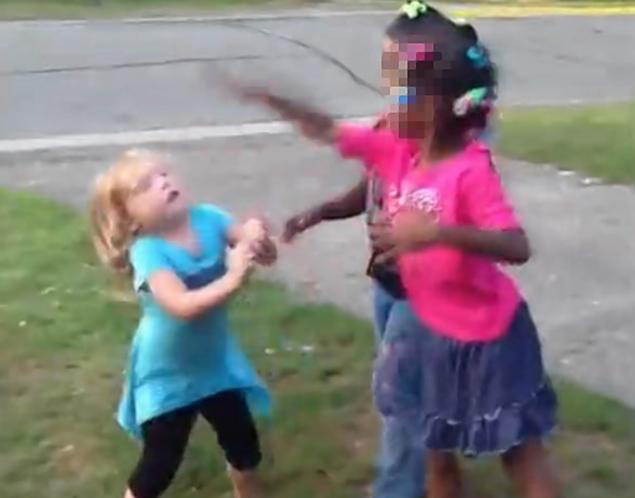 The following video is one of the most horrific you will ever see.

Kids will be kids, but when no parents are involved, on either side, it makes us realize why so many of our children are taking the wrong path in life.

No parental supervision ANYWHERE to be found.

I started writing political articles in 2012 when I was first starting to awaken to the things going on around me.

Somehow I missed this video from 2013, but it’s not a real shock since it appears almost none of the conservative outlets bothered covering it.

The obvious question in my mind is… Is Trump really dividing us or just trying to clean up the division that Obama and his predecessors have already sewn?

I have a hard time stomaching the people of this country labeling Donald Trump a racist.

I know why many think that, however.

Could it be because our media paints him that way, every chance they get?

People are generally too lazy to look for truth.

How many people, for instance, are willing to dig up 6 year old videos that have been blocked by all of the internet powers that be?

LiveLeak still has the video as well, here it is again.

The parents of these children, black kids and white child, certainly won’t be winning any parent of the year awards, any time soon.

The black kids acted like punks, and the white girl was obviously on her own with no parental supervision.

What kind of parent lets a toddler wander off on her trike?

America has a lot of problems and they didn’t start with Trump.

This is the worst video of black mob violence you will see today. Maybe ever: Four black children beat and taunt a three-year old white girl. Then the cameraman posted it on Facebook over the weekend with the heading, “When white people piss black people off.”

The video begins in the middle of a street in Minneapolis. Two black girls, twice as old and twice as big as the white girl, are screaming at the girl on a Hot Wheels tricycle.

Then the violence begins: The two girls each grab one of the white girl’s wrists and force her to strike herself in the face. Several times. The white girl starts crying like only three-year old girls can.

“Why you hitting yourself?” asks the 12-year old cameraman. The girls doing the beating think that is funny. They continue striking her as he moves the camera away. “Shut up, man,” he scolds the white girl.

When the camera returns a few seconds later, the little girl is still crying, still surrounded by her two assailants. Enter a black boy about ten years old. “Watch me beat up this little kid,” he says.

But before that happens, the black children run away, leaving the little girl crying in the middle of the street, still seated in her Hot Wheels tricycle.

The kids wander around ten yards away, ignoring the little girl, still in the street. The black boy who just threatened to beat her up enters the camera again, this time begging, “Can I see the video?”

After a cut in the action, the video picks up with the little white girl now standing on the lawn. The two black girls approach, with one instructing the other: “Hit her hard. Hit her in the head like this.”

READ THE REST AT WND…

I have to share one more quote from that WND article:

The intrepid investigators at PatDollard.com found the mother of the cameraman, Ranika Wills, on the phone. She did not have many answers other than to say kids always fight. And she wondered why the reporter did not call George Zimmerman and ask him those questions.

Upon researching this and trying to find the backstory I found many broken links to sites that no longer exist or have removed the story.

This is the true price of what is happening with the internet in America, and worldwide.

They are deleting the truth and replacing it with propaganda.

One video is not proof that black on white violence is out of control, but if you visit our site often, you probably know that there is a very militant group of black people in this world that will do anything they can to harm white people.

They say that blacks can not be racist.

That’s just another blatant lie that was sprouted by liberalism.

Here are some examples:

Well I have a small website and my staff is me.

And those stories are all recent (last 90 days).

I dare you to find me 5 stories of White-on-Black violence in this country that were as bad, in the last 90 days, and I will print them.

Does printing this make me a racist?

Many on the left would say so.

I am just trying to point out a major problem that the mainstream media ignores & hides.

Black on White violence really started to surge under the Obama Administration and continues today.