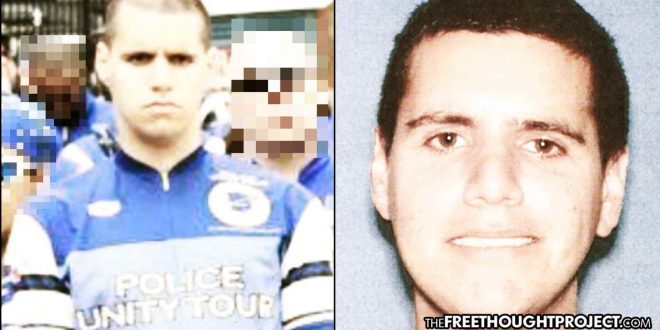 Jersey City, NJ — As the Free Thought Project reports on a regular basis, police officers are caught on a regular basis preying on society’s most vulnerable. There are so many of these instances that we cannot possibly report on all of them. However, some of them are so over the top, that we feel compelled to call them out. Disgraced Jersey City police officer Stephen Wilson, 34, is one of these cases.

Wilson is a veteran law enforcement officer and has been with the Jersey City PD for over a decade. After his arrest in February, the department quickly distanced themselves from him, however, and the red flags began to surface.

After his arrest, Wilson was charged with conspiracy to commit human trafficking, attempted aggravated sexual assault and child endangerment. During a plea agreement last week, Wilson admitted to using an “incest app” that connected him to human traffickers. According to his confession, he paid human traffickers on the app $200, to supply him with two girls, ages 8 and 10, who he could rape in Atlantic City.

According to police, Wilson was intercepted in Atlantic City before meeting the human traffickers. This public servant and married father had condoms and $500 cash on him when he was arrested.

Last week, instead of going to trial, prosecutors offered Wilson a deal in exchange for his confession. On October 21, Wilson will begin an 8 year prison sentence and will also have to register as a sex offender and will be put on lifetime parole supervision once he’s freed. This lifetime parole is part of an initiative passed in 2018 called Megan’s Law.

The sentence should “serve as a warning to anyone who believes they can exploit or prey on innocent children.” Acting New Jersey Attorney General Andrew J. Bruck said. “Predators like Wilson will go to great lengths to sexually exploit children, but law enforcement will go farther to bring them to justice.”

“Child predators like Wilson are not only using more sophisticated technologies, but they are networking with other abusers in order to find their next victim,” said New Jersey State Police Supt. Col. Patrick J. Callahan.

As stated above, Wilson raised several red flags over the course of his career, up to and including an instance in Atlantic City where he disappeared and lied about his whereabouts. When a journalist with the RealGardenState.com asked the department about Wilson, some of his fellow cops said they suspected Wilson was “off” and were not surprised by his arrest. According to their report:

Following the arrest, JCPD sources reached out to Real Garden State expressing their disgust with the horrific allegations. Many were not shocked and essentially stated there was “always something off” about Wilson. Some even suggested there might have been warning signs.

One of those warning signs, according to multiple JCPD sources, was when Wilson briefly went missing in Atlantic City after the New Jersey Law Enforcement Memorial Service in Ocean Grove, NJ, on May 21, 2019.

As the story goes, Wilson was apparently with multiple JCPD officers at the memorial service. After the event was over, and unbeknownst to anyone else, Wilson went to Atlantic City that night. He was supposed to work the day shift on May 22, 2019, but wasn’t present for the JCPD East District roll call (either 7 or 8 AM) and a search for Wilson was launched when he did not respond to phone calls & text messages.

During the search it was discovered that Wilson supposedly told his father, who he was living with at the time, that he was staying with his girlfriend the night before, per sources. The girlfriend was subsequently located, but the woman didn’t know where the officer was and became distraught.

Sources say the girlfriend was an Asian immigrant, had difficulty communicating in English, and was living with two other women. During questioning, it was discovered she was pregnant with Wilson’s child. Without sounding xenophobic/racist, the situation was deemed bizarre at the time by JCPD officials.

These same sources said a photograph of Wilson with his wife and child also surfaced which raised several red flags. According to the source, without going into detail, the photo showed Wilson’s child wearing an outfit with a sexually suggestive message on it.

Luckily, for at least the next 8 years, this monster will be where he belongs, in a cage. While 8 years may seem like a light sentence for Wilson’s crimes — and it is — other officers often commit similar atrocities and never see the inside of a jail. Hopefully, this is a sign that things are changing.