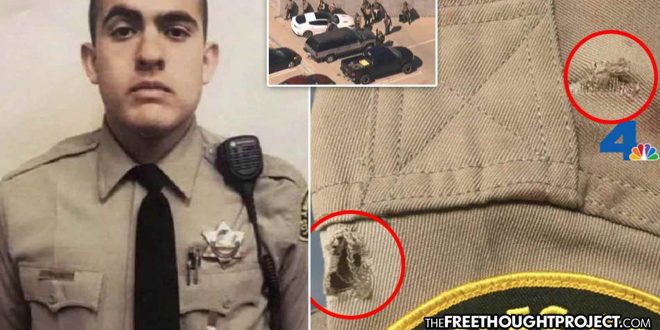 Los Angeles, CA — The country watched in horror last year after news stations across America ran the story of how Los Angeles Sheriff’s Deputy Angel Reinosa was shot in the shoulder by a sniper as he walked from his patrol car into the station. A massive manhunt ensued as heavily armed deputies in military attire set up a perimeter and locked down the area. For days the police state ran rampant as officers looked for the shooter. But they would never find him—because the entire story that led to the militarized lock down of the town, was a lie.

Now, this cop is finally getting what he deserves—accountability. Reinosa was charged this month with two insurance fraud felonies and a misdemeanor for filing a false report. Last week, police obtained a warrant for this lying cop and detectives from the Internal Criminal Investigation Bureau arrested him during a traffic stop. He was booked into the County Jail Inmate Reception Center, where his bail was set at $40,000.

“Not only does it bring discredit to the department and our deputies, it jeopardizes the trust and good faith we ask for from the public and elected officials. Worst of all, it’s a slap in the face of deputies who have been shot in the line of duty, and to the families of those who paid the ultimate price for their service,” the union said in a statement.

At the time, Reinosa claimed the shots came from a sniper in a nearby apartment building that houses people being treated for mental illness. This likely led to the rights of innocent individuals being violated as the department blamed the facility’s proximity to the station.

“It’s insanity to allow such a facility to exist in that particular location,” Lancaster Mayor R. Rex Parris said during an emotional press conference last year. “Who decided to put a four-story building that looks down on a parking lot of that particular type there – it’s beyond my comprehension,” Parris said.

“The only reason that deputy is alive is because he had his vest on,” he said without having one shred of evidence.

An entire complex full of innocent people getting help for their mental illnesses was blamed and all of it based on the lies of a single cop.

After news of the sniper blew up the airwaves, the news this cop “completely fabricated” the story, barely registered as a blip. On the following Saturday night, assistant Sheriff Robin Limon held a press conference to tell the truth. Limon said the deputy lied about the entire ordeal.

The 21-year-old rookie had reportedly cut holes in his shirt to make it look like he had been shot and was treated for a “bruise” on his shoulder. But when police began questioning him, his story didn’t add up.

“Things didn’t add up,” Homicide Bureau Capt. Kent Wegener said. “There was no sniper, no shots fired and no gunshot injuries sustained to his shoulder. Completely fabricated.”

“Much of his statement was self-serving, didn’t make a whole lot of sense,” Wegener told reporters.

“There were several things that were curious,” Wegener said. “There was no ballistic evidence in the parking lot at all. No bullet was recovered. … There were many things that didn’t add up.”

If convicted for his tall tales, Reinosa faces a possible maximum sentence of five years and six months in jail.

While Reinosa’s fake shooting story may seem outlandish, it is, unfortunately, not an isolated incident. In fact, several other officers have been caught forwarding the false narrative about the war on cops with fake shootings.

In September of 2016, police around the country spread the story and asked for prayers for one of their own who’d been shot while on duty. An investigation was launched, a dragnet conducted, the town locked down and a suspect had been brought in. However, cops and their supporters quickly found out they had been duped by their fellow officer once investigators discovered the entire story had been fabricated. In October of last year, former Jackson Police Department Officer Sherry Hall was sentenced to prison for her lies.

As TFTP reported, one cop went to the ultimate extreme to fake a war on cops and actually took his own life.

In September 2015, a massive manhunt ensued after Lt. Joe Gliniewicz was found dead 50 yards from his cruiser 15 minutes after he radioed in that he was pursuing three suspects on foot. Despite locking down the entire town, no suspects were found in the area.

The following November, it was revealed that the reason no suspects were ever found was due to the fact that Gliniewicz killed himself. In a press conference, Lake County Major Crimes Task Force commander George Filenko said, “This staged suicide was the end result of extensive criminal acts that Gliniewicz had been committing.”

Gliniewicz wasn’t alone either. Also in September 2015, a Millis, MA police department placed an entire town on lockdown after a cop claimed he’d been shot by a ‘black man.’ However, it was quickly discovered that the cop faked being shot at to cover for his reckless driving.

“We have determined that the officer’s story was fabricated. Specifically, that he fired shots at his own cruiser as a plan to concoct a story that he was fired upon,” Millis Police Sgt. William Dwyer said. “The evidence indicates the shots were not fired by a suspect, and there is no gunman at large in or around the town.”

England Police Department Sgt. David Houser faked being shot during a traffic stop in Arkansas. Another statewide manhunt was launched for a non-existent “Hispanic man.” Two weeks later, Houser caved to pressure and confessed to shooting himself.

Before that, it was reported that veteran police officer Terry Smith was shot in the back by an unknown assailant, and Black Lives Matter protesters were implicated. However, the Houston Police Department found that it was actually his partner, Gregory Hudson who shot Smith.

In September 2015, Officer Bryan Johnson crashed his police cruiser into a tree. To cover up his terrible driving, Johnson then fired several shots into his wrecked car and then radioed into the station, claiming he’d been a victim of the war on cops. Yet another massive manhunt was launched in search of a fake shooter.

Commerce City Police Officer Kevin Lord was also arrested in 2015 after it was revealed he faked being shot at during a traffic stop. Lord claimed he was shot at close range while making a traffic stop in the 9700 block of Peoria Street. Like Reinosa, his bullet-proof vest was credited with saving his life.