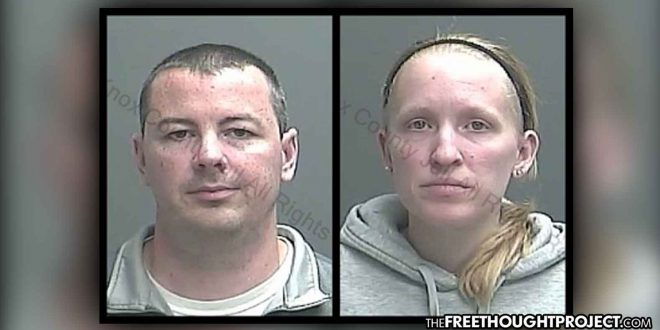 Know County, IN —The average rate of families who experience domestic violence in the country is around 10 percent. However, when we look at police officer families, the 10 percent number quadruples. As the National Center for Women and Policing points out, two studies have found that at least 40% of police officer families experience domestic violence. It happens so often that it is not even reported on in the media any more unless the case is utterly horrifying — like the one below.

A Vincennes Police Officer and his wife were arrested over the weekend after it was discovered that they were essentially torturing a child. Thirty-seven year old Vincennes Police Officer Robert Hammond and his wife, 32-year old Kristi Hammond, were booked into the Knox County Jail Saturday. They are now facing charges of criminal confinement of a child and neglect of a dependent. Hammond is also facing an additional single count of Battery.

The cop and his wife are accused of locking Kristi Hammond’s daughter, Robert’s stepdaughter outside at night like a dog. The couple would not let the girl inside the home and she was forced to sleep outside all night long on multiple occasions on the wooden deck. But that’s not all.

According to the court documents, the couple is accused of using duct tape to tie the child down on multiple occasions while beating her face and head with a wooden spoon. During the beatings, they would duct tape her mouth too, so she couldn’t talk. You cannot make this stuff up.

Court documents show that the child’s actual father suspected the abuse as far back a June and reported it to the Indiana State Police and child protective services. Police say that Kristie admitted to using the wooden spoon on the child which left bruises on her face, arms, head, and buttocks.

In a statement, the Vincennes Police Department says Hammond has been suspended without pay as of November 1.

What kind of person is okay with duct taping a little girl to a chair and beating her with a wooden spoon? How on earth could a spouse be okay with watching the other spouse carry out such a heinous act?

Unfortunately, this type of abuse happens all too often, especially in police officer families. In fact, it has its own abbreviation. The most recent data on the matter shows that Officer-Involved Domestic Violence or OIDV, is a major problem.

Even more startling than the fact that 40% of police officer families experiencing domestic violence is the fact that this number is likely far higher as it is estimated that much of it goes unreported. Battered children or spouses have no one to turn to when the one who is beating them is the one who would also receive the complaint of abuse.

According to Leigh Goodmark, author of Hands Up at Home:

The data on intimate partner abuse by police officers are both dated and potentially flawed, but in ways that make it more likely that abuse is being under—rather than over—reported. Most of the studies rely on self-reporting by police officers to establish prevalence of abuse. Self-reporting is a notoriously unreliable measure; as one study noted, ‘The issue of the reliability of self-reports data is problematic when considering any socially undesirable behavior.’

The problem of police violence often times comes out in full display in the form of violent murder suicides. Last December, the nation was shocked to hear about the tragedy that unfolded in Plant City, Florida in which a Hillsborough County sheriff’s deputy killed his wife, daughter and granddaughter, then confessed to their murders over his agency radio before killing himself.

Terry L. Strawn, 58, a Sheriff’s Office veteran who was once named Officer of the Year was the perpetrator. It is unclear how much abuse his family suffered before he made the ultimate decision to murder them.

In less serious cases, police have been seen beating their wives or girlfriends—in public, while in uniform.

As TFTP reported last year, officer Ian Ray and his girlfriend attended McGavock Elementary School for a child’s graduation when the two got into a verbal argument during the ceremony.

Ray was in uniform at the time and multiple witnesses reported seeing a police officer grab his girlfriend around the neck or hair and brutalize her. During the altercation, witnesses called police who showed up and then arrested the officer.

In that case, the officer was arrested. Sadly, however, many of these abusive cops are protected by their own departments and when an abused spouse or girlfriend attempts to get help, they are ignored and the abuser protected.

As TFTP has previously noted, a report by a government-appointed watchdog group shows that most of the time, the abusive officers commit these crimes with seeming impunity.

A study conducted by the Domestic Violence Task Force called Domestic Violence in the Los Angeles Police Department: How Well Does the Los Angeles Police Department Police Its Own? revealed that performance evaluations of cops with a history of domestic violence are largely unaffected. The study of the LAPD examined 91 cases in which an allegation of domestic violence was sustained against an officer.

Sadly, it is estimated that many of the abused women never come forward as they know the likely result — which is getting shamed by the department for reporting it and potentially more abuse.

Diane Wetendorf, a specialist on police abuse, points out the most common fears when reporting police domestic abuse in her handbook:

If your abuser is an officer of the law, you may be afraid to:

These fears can make someone feel incredibly trapped and feel like there is no way out — especially a child.

If you or someone you know is abused or is an abuser, cop or not, we urge you to come forward to stop it. Silence only serves to prolong the abuse indefinitely.