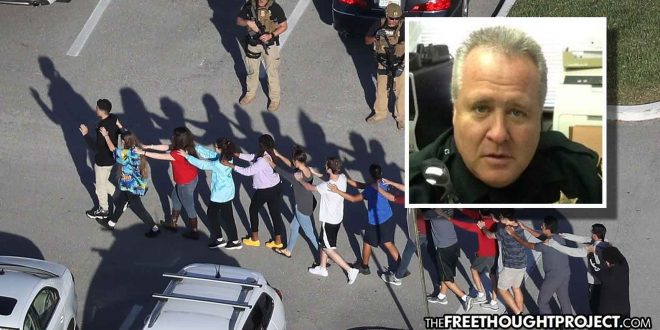 Parkland, FL — A sheriff’s sergeant who was fired after the Marjory Stoneman Douglas High School shooting for cowering by his car while Nicolas Cruz slaughtered children inside, will get his job back — and six figures of back pay.

According to the Sun Sentinel, an arbitrator has dismissed the case against Brian Miller. According to a statement from the union that represents deputies and sergeants, the arbitrator found that the Broward County Sheriff’s Office violated Miller’s due process rights when Sheriff Gregory Tony terminated him long after state law allowed it.

Despite clearly neglecting his duties — to the point of costing children their lives — this coward cop will receive a large sum of back bay and his badge. Miller was fired 16 months after the shooting. After former sheriff Scott Isreal refused to fire the cop, his replacement, Tony, fired Miller and then deputies Joshua Stambaugh and Edward Eason a few weeks later.

As the Sentinal reports:

Miller was the first supervisor on the scene. He arrived in time to hear three or four shots. As a supervisor, he didn’t rush to take command. Instead, a state commission investigating the shooting found that Miller took his time putting on a bulletproof vest and hid behind his car on Holmberg Road, not going on the radio for 10 minutes.

“Miller failed to coordinate or direct deputies’ actions and did not direct or coordinate an immediate response into the school,” a report from a commission said. “Sergeant Miller’s actions were ineffective and he did not properly supervise the scene.”

Now, this absolute, total failure is back on the streets, ready to cower behind a car the next time he faces an actual threat.

Readers of TFTP will also remember the other coward cop who was not only fired for refusing to protect the children of Marjory Stoneman Douglas High School but was also arrested for it. The disgraced ex-deputy Scot Peterson aka “The Coward of Broward” claimed in court that he had no legal duty to confront the Parkland shooter and protect the children inside the school. Although a judge originally rejected the deputy’s claim that he had no duty to confront Nikolas Cruz that day, a pile of court cases says otherwise.

As TFTP reported, video showed deputy Peterson cowering in fear outside the building as gunfire erupted inside. Had he confronted Cruz, an untold number of lives may have been saved.

The court case against Peterson was a negligence suit filed by Andrew Pollack, whose daughter Meadow was tragically killed in the shooting. Pollack said that it made no sense for the deputy to argue that he had no legal duty to go inside.

“Then what is he doing there?” Pollack said after the ruling. “He had a duty. I’m not going to let this go. My daughter, her death is not going to be in vain.”

Peterson’s attorney, Michael Piper disagreed. Piper acknowledged that while this argument for defense may seem offensive and outrageous, as a matter of law, the deputy had no legal duty to confront the shooter.

“There is no legal duty that can be found,” Piper said. “At its very worst, Scot Peterson is accused of being a coward. That does not equate to bad faith.”

If we go back through decades of court cases, we will find that Piper is indeed correct.

Police in America are not required “protect and serve.”

To be entirely fair, there were probably plenty of officers who would have rushed into the building that day but case law dating back to the 1930’s says they don’t have to do so.

The leading case on the topic is Warren v. District of Columbia, 444 A.2d 1 (D.C. Ct. of Ap., 1981) when the Court stated that the “fundamental principle of American law is that a government and its agents are under no general duty to provide public services, such as police protection, to any individual citizen.”

In that case, police were directly alerted by Carolyn Warren, Miriam Douglas, and Joan Taliaferro that they were being held hostage by Marvin Kent and James Morse. Warren called police twice. But police never intervened and Warren, Douglas, and Taliaferro were held captive, raped, robbed, beaten, forced to commit sexual acts upon each other, and made to submit to the sexual demands of Kent and Morse—for over 14 hours.

The appellants argued that because police were alerted—twice—that police had a specific duty to protect them from the harm to which they were alerted. However, the court ruled in favor of police following “the well-established rule that official police personnel and the government employing them are not generally liable to victims of criminal acts for failure to provide adequate police protection.”

On top of this case is another from the Supreme Court dating back to the 1930’s which established the guidelines for federal government protection of citizens. In short, there is none. In the case of Erie Railroad Co. Vs. Tompkins, 304 U.S. 64, 82 L.Ed. 1188, the Court stated “there is no federal general common law. Congress has no power to declare substantive rules of common law applicable in a state whether they be local in their nature or ‘general,’ be they commercial law or a part of the law of torts. And no clause in the Constitution purports to confer such a power upon the federal courts.”

In fact, the only case establishing that police have a duty to protect individuals states that those individuals must be under direct responsibility of police at that time.

In the case of DeShaney v. Winnebago County Department of Social Services (109 S.Ct. 998, 1989; 489 U.S. 189 (1989)), the court in DeShaney held that no duty arose as a result of a “special relationship,” concluding that Constitutional duties of care and protection only exist as to certain individuals, such as incarcerated prisoners, involuntarily committed mental patients and others restrained against their will and therefore unable to protect themselves.

The reality is that police exist to enforce the law only. As we are quickly learning with their responses to the COVID-19 lockdown.

In a perfect world, police would show up prior to a crime and stop it, or at least during a crime, but this is simply not a reality most of the time. If there were enough cops to stop all crimes, this would require an Orwellian 1984 scenario with the state surveilling all citizens, all the time. While this would likely stop most of the crime, the conditions required to do so would be a living hell.

We need only look at prisons to see how even under the direct care of law enforcement, crimes, neglect, murders, and rapes, all still take place. No one in their right mind would ever want to live under such conditions in a free society.