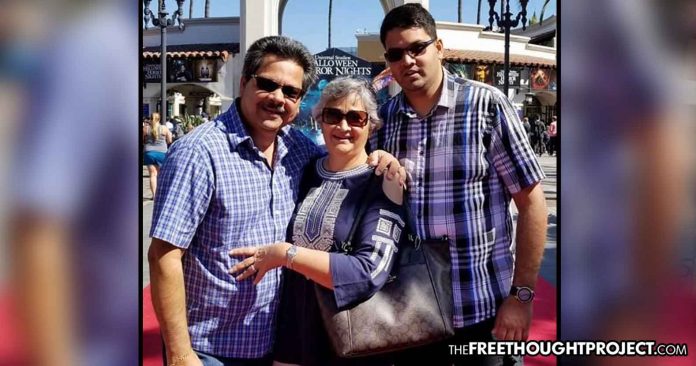 Corona, CA — On Sunday, panic erupted inside a Corona, California Costco as multiple people were injured and one man was killed. Nikki Tate and dozens of other shoppers immediately dropped to the ground as fears of the next mass shooting filled their thoughts. However, it turns out the “mass shooter” was an LAPD cop and his unarmed victims were a mentally disabled non-verbal man and his parents.

Tate told USA Today that she heard “about six or seven shots” as she and other shoppers crawled around aisles to escape the shooter. After it was over, Kenneth French, 32, of Riverside, lay dead on the ground next to his two parents who remain in critical condition.

Immediately after the shooting, police claimed there was an argument in the store between two people when one of them pulled out a gun and shot the other. Police claimed they had detained the shooter inside the store.

Hours later, however, police changed the narrative and said no one was in custody and that there had been no arrests in the case.

Later police would claim that French, without provocation, “attacked” the yet unnamed LAPD police officer who was holding his young child which forced the officer to pull his weapon and kill French and shoot his two parents as well.

“Without provocation, a male unknown to the officer’s family assaulted the officer while the officer was holding his young child,” a statement said. “This attack resulted in the officer firing his weapon, striking the male and two of the male’s family members.”

The officer’s child was not injured. Police claim the officer was treated at a local hospital for unspecified reasons and then released.

The language used to describe the officer’s actions — especially considering he was off-duty — is an all too familiar narrative we hear when on-duty police officers kill unarmed victims. Had the LAPD cop been an average citizen and shot and killed a mentally disabled man, shooting his parents in the process, rest assured that this would’ve played out far differently.

What’s more, while anyone would be justified in shooting someone who attacked them and their child, the family of French disputes this story.

“He was a gentle giant,” Rick Shureih, French’s cousin said to the LA Times. “He’s never been violent in the past. He’s always been very cooperative and kept to himself.”

The Press-Enterprise interviewed the Frenchs neighbors as well, who said they have never seen any aggressive action from Kenneth.

According to PE, the neighbor said he could not recall Kenneth French ever challenging anyone or being aggressive. “They have been here four or five years. There was never an incident like that.”

According to the Times, “Shureih identified his relatives as Russell and Paola French, Kenneth French’s parents — both of whom were being treated in an intensive care unit Sunday night. Paola French was still in a coma, Shureih said, while Russell French’s condition has improved some since the shooting.”

Shureih told the Times that he can’t imagine what would have led up to the shooting, but he explained that it was unlikely Kenneth French initiated a verbal confrontation because — due to his mental condition — he’s not spoken in years.

“It could have been that he bumped into somebody but couldn’t communicate the fact that he was sorry,” Shureih said.

French’s mental disability was so debilitating that he lived with his parents his entire life. Shureid described French’s parents as “the sweetest people in the world.”

I’M NOT KEEPING QUIET ABOUT THIS! PEOPLE NEED TO KNOW! THIS IS MY FAMILY! THESE ARE THE VICTIMS OF THE COSTCO SHOOTING THE OTHER NIGHT. MY COUSIN KENNETH WAS KILLED AND HIS PARENTS, MY AUNT & UNCLE WERE ALSO BOTH SHOT AND ARE IN ICU. DO THEY LOOK INTIMIDATING TO YOU? DID HE REALLY HAVE TO SHOOT THEM ALL? I’M POSTING THIS PICTURE BECAUSE THE STORIES ON SOCIAL MEDIA HAVE MADE THEM OUT TO BE THE SUSPECTS, AND THE OFF DUTY COP THE VICTIM. THIS IS A FAMILY THAT WAS UNARMED AND WAS JUST GROCERY SHOPPING. TRUTH WILL COME OUT! I’M SURE THIS WAS A MISUNDERSTANDING THAT GOT ESCALATED FOR NO REASON! IF ANYONE WAS A WITNESS PLEASE GET IN CONTACT WITH US.

Shureih says he plans on hiring a lawyer to advocate on his aunt and uncle’s behalf and is asking witnesses to come forward.

“We need witnesses to come forward, We need to know the shooter’s name. We need to get the surveillance tape from Costco,” Shureih said. “These are things we need to pursue to make sure justice is done.”

As far as the video goes, TFTP reached out to Bill Scott, whose son was also killed at a Costco by police, and who tells us that, “if the Costco security video ‘malfunctioned,’ you can be sure that cop killed the victim for no justifiable reason. Costco employees always help cops cover up their deadly mistakes.”