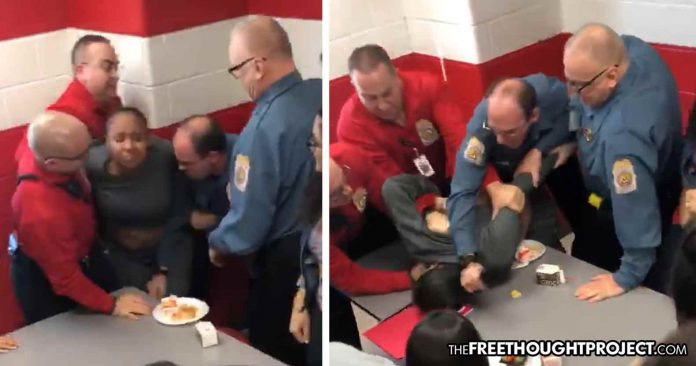 Hazel Township, PA — A disturbing video was shared with the Free Thought Project earlier this year showing a school cop punch and pull the hair of a teen girl as guards held her arms behind her back. The community and parents of children at Hazleton Area High School have been furious since the video went viral and they’ve been demanding justice—although they have yet to see any.

The video was uploaded to Facebook by a student at Hazelton Area High School in February. It has been nearly two months since this incident and not only has the officer not been fired, but he is still working in the school.

This week, Jamie Longazel, Associate Professor at John Jay College, explained how this situation is a “travesty.”

On February 12, I joined community members and local activists who held a rally in frigid temperatures outside the school’s administration building before packing the board meeting and speaking out. Many expressed how appalling it was to them that the officer caught on tape using excessive force was still working in the schools.Many explained to the board how this case is more a trend than an anomaly.

To his credit, Superintendent Brian Uplinger promised that school police officers would receive additional training, but not once did he reprimand the officers’ actions despite twice reprimanding violence among students.

As TFTP reported at the time, the video shows a 15-year-old student being restrained by multiple officers and guards. As the girl’s hands are behind her back, one of the officers begins punching her.

After punching the girl multiple times, the girl is then slammed face first into the table as the officer begins pulling her hair. The alleged abuse set the rest of the students off who quickly surrounded the scene and began screaming at the officers to stop.

According to authorities, police responded to the cafeteria that day because there was an altercation involving several students.

“The students who were detained were involved in a large altercation with other students in the cafeteria,” said the superintendent of the Hazleton Area School District, Brian Uplinger.

Uplinger defended the actions of the officers and said they handled the situation properly as they were trained to do.

“The security officers and school police officers were within the scope of their training to detain these individuals. Had they not, there would have been additional injuries to other students within the cafeteria,” said Uplinger, according to Buzzfeed news.

“It’s important to know there are always two sides to every story and it’s really important for parents and students and community members to get both sides of those stories before going to social media,” he said.

“At that point, the officer had to get that under control immediately. You can see from the snippet of video there were hundreds of kids in the cafeteria and they were yelling and cheering her on. They needed to deescalate that ” Chief Harry Noted.

According to the school district the officers arrested the girl in the video, along with three others, who are all facing expulsion. For a schoolyard fight, these kids will now have an uphill battle for the rest of their lives.

Indeed, as Longazel so accurately notes, “such problems remain endemic across the state and the country. Students of color continue to be brutalized by school police officers, continue to be disproportionately disciplined and disciplined more harshly, and continue to be prepared not for careers, but for prison.”

Adolescent quarrels are a frequent occurrence. As hormones rush in, children attempt to assert control over their environment as well as other children and the result can often manifest into a fight.

In the past, if a fight were to break out at school, the teachers, and in some cases the students, would rush in to pull the students apart. However, as the video above illustrates, this is no longer the case. Now, armed police officers rush in, begin punching girls and pulling hair.

Sadly, as schools across the country rely more and more on police to force student compliance, instead of training and common sense, this scenario becomes more common.

In a single week, TFTP reported on two other instances of school police caught on video violently attacking children.

In one video, a massive deputy grabs a 16-year-old boy by the neck and sprays him directly in the face with pepper spray. The boy was not the one fighting.

In another video, another massive deputy grabs another 16-year-old boy and body slams him to the ground like a rag doll. The incident was so overwhelmingly disturbing that the school had to be placed on lockdown after students began to revolt.

Something has to change.