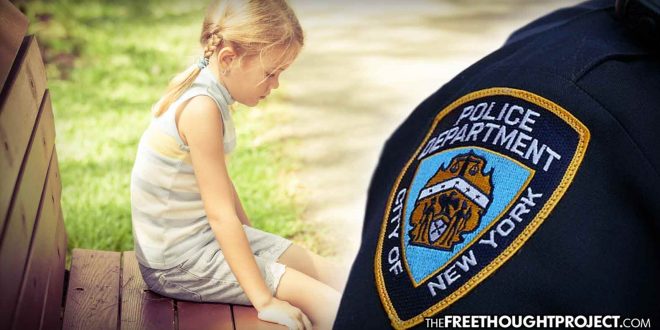 New York, NY — Once again, a Special Victims Unit detective, the ones charged with investigating sex crimes against children among other duties, has been charged with molesting a minor.

Arrested last week, Det. Juan Jimenez, 37, is accused of sexually abusing his daughter’s friend, a 12-year-old girl. The cop was babysitting his daughter and her friend when the incident allegedly took place. The girl told police he tried to kiss her against her will and grabbed her buttocks. Police charged Jimenez with two counts of sex abuse, forcible touching and acting in a manner injurious to a child.

The 13-year-veteran — whose job it is to keep tabs on registered sex offenders — now faces the possibility of becoming one himself. Highlighting his blue privilege is the fact that after he was arrested, he was released without bail. People arrested over unpaid parking tickets don’t even get that treatment and this man is accused of molesting a child. Jimenez is currently suspended from the NYPD, which usually means he’s receiving his salary while awaiting trial.

It’s unclear if the girl is his only victim so potential victims are encouraged to come forward at this time while he is behind bars awaiting trial. As TFTP has reported, pedophiles are often attracted to employment opportunities which afford them a certain degree of qualified immunity, such that cops possess.

Often times, pedophiles are sports coaches, teachers, priests, youth pastors, and other respectable jobs which places them near children. Cops however, as TFTP reports quite often, seem to have some special arrangements with the courts whereby they see little to no jail time for their crimes. It’s really unfathomable and we wish we were making this stuff up. Unfortunately, even we are shocked at the slap on the wrist sentences cops receive.

Just this past summer, Eddie Martins and Richard Hall, both NYPD officers received no jail time for allegedly handcuffing a teenager, placing her in the back of their unmarked police-issued van, while both officers raped her in the back of the van. They said the act was consensual. The teen, however, steadfastly held to her position she’d been raped. During the investigation and trial the cops’ defense team engaged in what many claimed was an elaborate character assassination both pre-trial and during the proceedings. Her lawyer relayed the broader implications.

Michael David represented the teenager. He called the sentence “outrageous” and told reporters:

It’s sending the worst message to victims of police sexual misconduct in America, that police could kidnap someone, rape her, and throw her on the street, and get away with it.

Brooklyn District Attorney Eric Gonzalez reportedly wanted to see the two ex-cops behind bars but again blamed the victim for having inconsistencies in her allegations. However, it must be noted the prosecutor’s office is the one which offered the cops a plea deal.

These defendants engaged in a shocking abuse of power which they finally acknowledged…While I would have preferred to see them serve prison time, they are no longer members of our police department and with today’s plea are convicted felons.

Martins and Hall were initially charged with rape, sexual assault, and kidnapping. However, in March, those charges were reduced to official misconduct and accepting a bribe, a far cry from the forceful, unwelcome, and unwanted rape the teen alleged took place. In fact, she never recanted her story.

Instead, she vehemently decried the rape which all started with Martins and Hall finding the teen in possession of marijuana. The two cops had sex with her, and then dropped her off about a block from the police station, never booking her on the possession charge. Yes. That’s right America. Your cops rape people and get away with it. Why would we think a cop who molested a 12-year-old will ever spend a day in jail as a convicted sex offender?