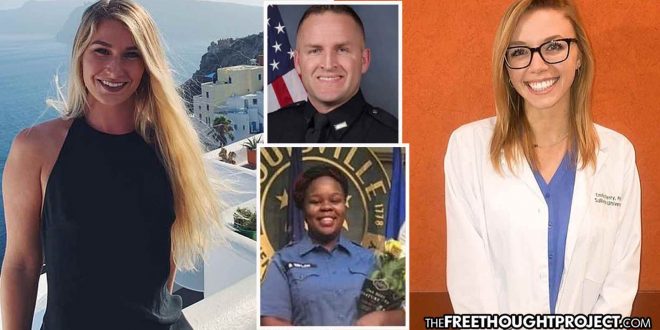 Before the tragic murder of George Floyd by police, cops in Louisville, KY broke into an innocent couple’s home and murdered accomplished EMT, Breonna Taylor as she slept in her bed. Instead of charging the officers who killed Breonna, cops arrested her boyfriend for trying to prevent her murder. Now, as the cops who killed Breonna enjoy their paid vacations, the world is learning about their alleged criminal history.

After they broke into her home and killed Breonna Taylor, officer Brett Hankison and two other Louisville officers, Sgt. Jonathan Mattingly and Officer Myles Cosgrove, were given paid vacations, not criminal charges.

However, the Louisville Metro Police department is finally giving Officer Hankison some attention but not for his role in murdering Breonna Taylor. This attention comes in the form of two women accusing this officer of sexual assault and rape.

The department has since reached out to the women so the department’s Public Integrity Unit “can initiate and conduct an investigation,” police spokesman Dwight Mitchell tells PEOPLE.

In an impassioned post on Facebook, Borders, who studied law at the University of Louisville, said her assault took place in 2018 and she had nowhere to go because her rapist was a cop.

In April of 2018 I went out to a bar with some friends. I went to call an uber home and a police officer who I had interacted with on many occasions at bars in St. Matthews offered me a ride home. He drove me home in uniform, in his marked car, invited himself into my apartment and sexually assaulted me while I was unconscious.
It took me months to process what had happened and to realize that it wasn’t my fault and I didn’t ask for that to happen by allowing him to give me a ride home. I never reported him out of fear of retaliation. I had no proof of what happened and he had the upper hand because he was a police officer. Who do you call when the person who assaulted you is a police officer? Who were they going to believe? I knew it wouldn’t be me. ‬
‪In ‬March of 2020 that same officer and two others (John Mattingly and Myles Cosgrove) entered the home of Breonna Taylor under a no-knock warrant and with absolutely no regard for anyone’s life shot over 22 rounds murdering Breonna Taylor while she was sleeping.
Brett Hankison has a history of violence, sexual assault, and planting drug evidence on people. There have been multiple allegations against this man and reports but all cases dropped and no disciplinary action taken.
He is currently on paid leave in Florida on the beach.
I implore all of you to demand justice for all of his victims, but mostly demand justice for Breonna Taylor.
Contact the attorney general Daniel Cameron to charge him and the LMPD Professional Standards Unit to fire him. https://www.cameronforkentucky.com/contact/
Sign https://www.change.org/p/andy-beshear-justice-for-breonna-t…
Donate to Breonna Taylor’s family https://www.gofundme.com/f/9v4q2-justice-for-breonna-taylor.
If you’re not angry, you’re not paying attention.

Terry, Hankison’s other alleged victim, tells a similar story of a cop preying on drunk women after the bars closed. The only difference is that the sexual assault started in the car on the way home.

This is Brett Hankison. In early fall, I began walking home from a bar intoxicated. A police officer pulled up next to me and offered me a ride home. I thought to myself, “Wow. That is so nice of him.” And willingly got in. He began making sexual advances towards me; rubbing my thigh, kissing my forehead, and calling me “baby”. Mortified, I did not move. I continued to talk about my grad school experiences and ignored him. As soon as he pulled up to my apartment building, I got out of the car and ran to the back. My friend reported this the next day, and of course nothing came from it.
Flash forward, I see his face. This face. Involved with the shooting of Breonna Taylor. I then find out he has a history of corrupt behavior. He has had multiple sexual assault allegations, and was in a federal lawsuit over planting narcotics on a black man to arrest him.
Not all cops are bad, but this one is. Right now, Mr. Hankison is walking free. Reading this, I hope you know this is not about me, but the reform that needs to take place. Please use your voices to speak up of the injustice occurring throughout our community.

Unlike Borders, Terry’s case was allegedly reported to police, who apparently took no action.

Officer Hankison has already been accused of having a ‘vendetta’ against another man, Kendrick Wilson and of being ‘a dirty cop’ in an October lawsuit; he denied all the claims, but the lawsuit continues. Wilson’s ongoing federal lawsuit accuses Hankison of targeting him and planting drugs, The Courier Journal reported.

Taylor’s family has filed a similar lawsuit naming Hankison as a defendant. As TFTP reported, this wholesale government sponsored execution of Taylor and subsequent unlawful arrest of Walker took place without cause. According to their lawsuit, Taylor was shot 8 times during a drug raid on the wrong home.

Instead of attempting to get to the bottom of the botched raid and hold those accountable who are responsible Taylor’s death, the department has circled the wagons and engaged in a cover up.

“LMPD has tried to sweep this under the rug,” Sam Aguiar, another attorney on Taylor’s case said. “The family right now has a very understandable desire to know the full circumstances of what went on that night.”

Indeed, they had successfully swept it under the rug and the story gained very little national attention at the time, except from outlets like TFTP. Now, it is finally getting the attention it needs and the charges against Walker have been dropped.

A petition has since been launched to bring charges against the officers involved and has since garnered over 6,000,000 signatures — hardly one that can be ignored.