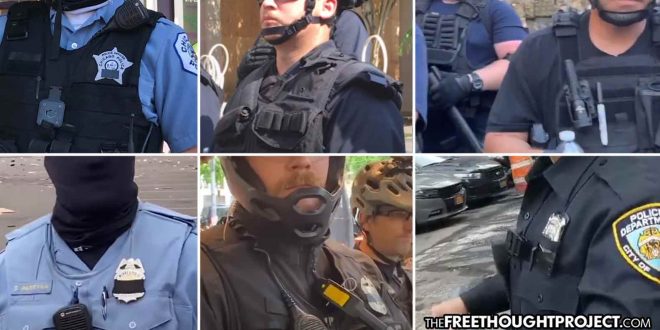 Across the country, in dozens of cities, cops are doling out unprecedented violence in the face of angry protests stemming from the murder of George Floyd. Though Floyd’s death was the flash point of the unrest, the uprising is now representing something far deeper — systemic abuse by law enforcement of minorities, the poor, and everyone else not directly connected to the establishment. As a result of said police violence, multiple cops have been suspended and or arrested, which is certainly positive. However, countless other incidents involve officers who cannot be identified and as a result of their anonymous instigation and violence, there has been no accountability.

In multiple states, police are seemingly taking measures to avoid this accountability by removing their name tags or covering their badges. This is in direct violation most departments’ policies. But no politicians, mayors, governors, or mainstream media seem to care.

Cops hiding their identification is ominous for two reasons. The first reason being that they can enact brutality against the innocent and we do not know who they are to hold them accountable. The second reason is the fact that anyone can dress up like a cop with no badge number and start doing whatever they want, up to and including inciting violence, detaining people, or any other numerous unscrupulous acts.

Showing just how deep the corruption is, the NYPD appears to have been given orders from the top down to cover their badge numbers and remove their name plates.

On Wednesday, according to the Intercept, the National Lawyers Guild sent a letter to the department and to the city’s corporation counsel, warning that if the NYPD doesn’t put an end to the practice, it could expect a lawsuit.

“The trend of individual officers to sidestep what minimal accountability exists, in order to more effectively and with greater impunity brutalize protesters for pretextual reasons, is unacceptable,” Andy Izenson, president of the New York City chapter of the National Lawyers Guild, who signed the letter, told The Intercept.

As the Intercept reports,

The practice of police obscuring their badge numbers — a form of identification that many jurisdictions require officers to make available to the public when interacting — has taken on a heightened significance amid the nationwide protests over the killing of George Floyd by Minneapolis police. The protests have been met with a show of force from officers, sometimes veering into brutality, leaving the risk that those without visible identification are acting with the very impunity to commit violence that spurred the protests in the first place.

The NYPD has strict regulations around displaying badge numbers — and a history of suppressing protests with violence and without accountability.

It’s not just the NYPD either. Though the NYPD claims they are covering their badge numbers with black bands to honor the officers who died from COVID-19, in Chicago, cops were documented putting duct tape over their badges.

The department claims they are now investigating the practice of covering badge numbers. As is always the case, we won’t hold our breath.

“All Chicago Police Officers are required to wear their unit assignment designator, nameplate and prescribed star so that they are clearly visible. An internal investigation has been opened into the officer who was photographed without his unit assignment designator and nameplate and with his star number covered. CPD holds its officers to the highest professional standards and violations of the Department’s policy will be addressed,” the department said in a statement.

These words ring hollow given the fact that after this statement was put out, the following video surfaced showing multiple hiding their badges and removing their body cameras.

FEDS TOOK MY POST DOWN EXPOSING CHICAGO COPS WHO HIDE BODY CAMS & BADGES. SCREENSHOT AND SHARE IT CAN HAPPEN HERE TOO. INFO BELOW pic.twitter.com/TK4XBTJ86i

After all the videos of cops covering their badges began to surface, in Washington DC, an entire unidentified standing militia showed up. No one knew who they were with or if they were even government. As RT reports:

Videos and photographs of the mysterious and heavily-armed figures have been swirling on social media for days, with many who have encountered them reporting that they refuse to say which government agency they are working for.

The anonymity of the forces has led some to suggest they look like armed “mercenaries” rather than government employees. One DC-dweller tweeted that the nation’s capital felt like it was “under some sort of military occupation.”

Completely unmarked officers in riot gear holding protesters blocks away from the White House. No badges. No insignias. No name tags. Nothing. Refused to tell us who they’re with. #DCprotest #DCprotests pic.twitter.com/c4lFFCsX48

These unmarked troops showed up in Philly too.

They just showed up and the Attorney General did not even ask the Mayor of Washington DC or anyone else if it was OK.

They are heavily armed, wear different uniforms, have most of their face covered, and refuse to say who they are.

When asked, they say they work for the Dept. of Justice. None will be more explicit than that – so clearly they were instructed to not tell anyone who they work for.

Even though the people asking pay their salaries – and have every legal right to know.

“I could understand why some of these individuals simply wouldn’t want to talk to people about who they were if that in fact was the case,” Barr told reporters asking on Thursday.

These “secret police” have many worried that the country is creating a sort of Stasi-esque covert law enforcement force that can operate in the darkness under extrajudicial pretense.

Despite defending the practice of sending in these “secret police,” the fact remains that the lack of identification grants them the ability to enact violence against citizens who have no way of knowing who they are much less how to even report it. This is a chilling notion indeed, and must be met with resistance immediately.