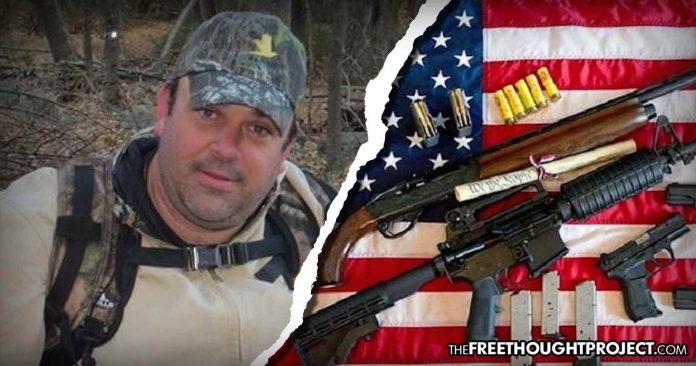 Millstone, NJ – An Iraq War Veteran was shocked when he received a call from his wife telling him that police officers were at their home, claiming that they needed to seize his legally owned firearms, even though he had done nothing wrong and the officers had no warrant.

Leonard Cottrell Jr., 40, is the latest citizen to be affected by a series of new gun regulations in the state of New Jersey—which is already known for having strict gun control laws—even though he did not break any laws, and all of the firearms he owned were registered with the state.

The disabled U.S. Army veteran, who served three tours in Iraq, told NJ.com that the ordeal began when his 13-year-old son was reported for making a comment about the increased security at his school.

Even though Cottrell’s son did not threaten anyone, the school decided to investigate the report by sending police officers to the family’s home, instead of simply calling the boy’s parents and having a meeting in the principal’s office to clarify whether it was a serious matter.

The officers waited until 9:30 p.m. on June 14 to confront the family, and Cottrell said that he was at work when he received a panicked call from his wife. She complied with the officers’ request to enter the home and search the 13-year-old boy’s room, where they found no weapons.

The officers then inquired about the number of weapons that were in the home, and wanted to seize the shotgun and pistol owned by Cottrell as part of their “investigation.”

However, Cottrell then questioned whether the officers had a warrant, and when they admitted that they did not, he told them that he would not allow them to take his firearms, as their request was clearly in violation of the Fourth Amendment.

“No one from the state was going to take my firearms without due process,” Cottrell told NJ.com.

In response to a request for comment on the incident, Sgt. First Class Jeff Flynn simply said “troopers responded to Mr. Cottrell’s residence in reference to the report of a possible school threat,” and that “it was determined that Mr. Cottrell’s weapons did not need to be seized.” He did not admit that the officers entered the Cottrell family’s residence without a warrant and attempted to seize the firearms without establishing probable cause.

Leonard Cottrell and his family were treated like criminals because his 13-year-old son apparently made a comment about the increased security at his school, and instead of going directly to Cottrell and his wife to handle the matter, the school called the police, and immediately barred the boy from returning to Millstone Middle School, and banned him from attending the school’s graduation.

“He’s upset. He didn’t do anything wrong, and he doesn’t understand why it happened—he was just having a conversation with nothing as far as threats,” Cottrell told NJ.com. “It shouldn’t have blown up the way it did. But he understands it happened, there are consequences and there’s fallout from his actions.”

Cottrell’s encounter was the result of New Jersey’s latest push to increase gun control measures, while clearly ignoring citizens’ constitutional rights. As The Free Thought Project has reported, Gov. Phil Murphy recently signed several bills into law, which are all targeted at increasing gun control by expanding background checks, adding increased restrictions to concealed carry permits, and establishing a “red flag” system where individuals can report people who they believe are dangerous, and those suspects will have their firearms temporarily seized by police.

While an innocent 13-year-old boy was painted as a dangerous criminal with no evidence against him, a convicted felon who spent years in prison on aggravated manslaughter charges was able to access a handgun, which he used to unleash a hail of bullets on a crowd at an arts festival in Trenton, New Jersey, last month, and 22 people were injured as a result—which should raise questions about how much New Jersey’s strict gun laws are actually working to “protect the public.”