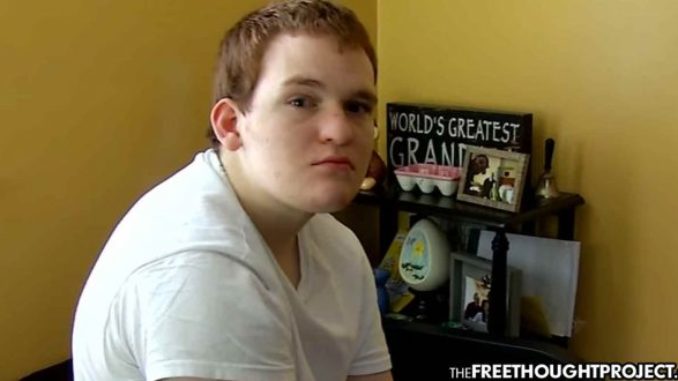 Humphreys County, TN – Will Ferrell is a mentally challenged young man who was accused of touching a 7-year-old girl’s genitals while jumping on a trampoline. Instead of immediately identifying the young man as having special needs and waiting for the results of a DNA test, detectives at the Humphreys County Sheriff’s Department treated him as if he had an IQ of a normal young man and grilled him using less than ethical interrogation techniques. Ferrell’s IQ is 63.

Detectives immediately began to grill the man with special needs up until the point they were able to get a false confession.

The interrogation tactics were so over the top that Ferrell’s public defendant released the video of them in an unprecedented move. During the interrogation, for hours, Ferrell continues to tell the detective that he did not do it. But the detective kept coming back with deceptive language that tricked the man with the intelligence of a 8-year-old into saying he may have actually touched the girl’s vagina. The officer even went so far as to imply that the alleged molestation victim was coming on to Ferrell—a notion that completely confused the mentally challenged man.

As the video shows, Ferrell is tricked into saying he “may have touched” her but if he did it was completely unintentional. Nevertheless, he was thrown in jail with society’s worst.

But that’s where the nightmare only just begins. While awaiting trial, three inmates raped Ferrell orally, anally, and with hot sauce bottles several times per day for eight months. Questions remain as to whether or not the jailers knew the young man who weighs barely more than 100 pounds was being raped in the jailhouse. However, the frequency of the abuse cannot be understated.

Also, according to the public defender, Jake Lockerty, police were complicit in this man’s abuse.

“Jailers would call him names, call him Dumbo because his ears stick out a little bit,” Lockert said. “He’s got inmates sticking hot sauce bottles up his rectum. He just felt like he had nowhere to turn.”

“I was raped every day, after dinner, after lunch, at night time,” he said. “When I think about it, what they did to me, when I think about it i just sometimes feel like I shouldn’t be alive for what happened. They stuck things up my rectum I got beat up every day. I really wanted to tell somebody.”

Lockerty, upon learning he had been raped, released the video of the interrogation to the public. This was an interrogation, he believed, implemented coercion and manipulation. The local news immediately reported on Ferrell’s ordeal. After the investigation by the news media it was learned the mentally-challenged man’s DNA was not the DNA that was present on the young girl. Instead, an unidentified male DNA was found.

“I just can’t imagine what Will feels,” Pam Ferrell, Will’s mother said. “They have broken him. He is going to have to stay with me for the rest of his life.”

Not only did Humphreys County throw a man whose mind is that of an 8-year-old in jail, not only was he repeatedly raped while he was in jail, but he also was completely innocent of having his DNA on the girl. They got the wrong guy! And not only did they get the wrong guy, the real villain is still at large.

Cop apologists often claim “there’s a bad apple in every bunch”. In this case, the entire judicial apple tree was bad. Where was common sense in recognizing they had a low-IQ individual on their hands? By their actions, police contributed to the man’s violent raping while in jail. Yet no officer will likely ever get fired over this egregious dereliction of duty. What happened to Ferrell is not only immoral, in some way it has to be criminal doesn’t it?

Not surprisingly, the Sheriff’s Office claims they had no idea he was an individual with special needs. They also claim they followed procedure during the interrogation and immediately moved Ferrell out of the jail cell he was in when they learned he was being raped. The police also promptly arrested the three men who raped him — Jonathan Rice, Michael Brunett and Benjamin Baker.

“I’m glad they brought charges but that doesn’t undo the fact that the jail put a 110 lb, 63 IQ in a cell with hardened criminals and sex offenders and allowed him to be raped and tortured over and over again,” Lockert said.

Where’s the outrage? Heads should roll for this travesty of justice if that phrase can even be used any longer.

If you’d like to express your opinion about Will Ferrell’s case and/or call for the officers involved to be fired/and or legally held accountable for their actions feel free to follow the Facebook link we provided above to the Humphreys County Sheriff’s Office.