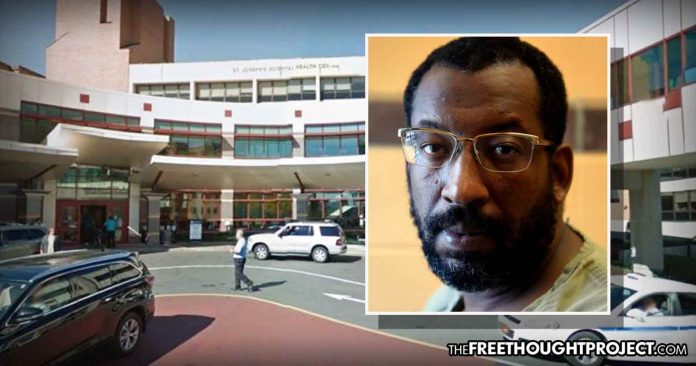 Police stopped Jackson that fateful day in October because they claim he failed to activate his turn signal far enough away from a turn. This method of policing is predatory and allows police to make up random reasons to stop people who they feel are suspicious.

During the stop, police found a tiny bag of marijuana on Jackson which would set off a chain reaction of events leading to his horrifying treatment.

As the stop progressed, one of the “expert” officers on the scene claimed that Jackson’s posture indicated that he’d likely hid something in his rectum. Chaos quickly ensued.

When police began kidnapping Jackson for having a tiny bit of pot and claiming he was hiding drugs in his rectum, Jackson resisted. He was then tasered, beaten, pepper-sprayed, and had a spit mask placed over his head before cops dragged him into St. Joseph’s hospital in Syracuse.

While in the hospital, Jackson was begging with police and doctors to take the mask off, as he said he was unable to breathe. But his complaints fell largely on deaf ears.

Instead, Jackson was taken in for an X-Ray to look for the non-existent drugs in his anus. As expected, the X-Ray found nothing. This is where the abuse should have stopped. It did not.

After the X-Ray failed to find anything, police just knew that it had to be missing something so they pushed for court order to perform a surgery called a sigmoidoscopy—in which an 8″ tube is inserted into the patients rectum—to search Jackson’s insides for the non-existent drugs. The court granted the order.

“I told police: We would not be doing that,” Dr. William Paolo said of the requested search. “Not while I was there.” But police did not care and they ordered the medical staff to conduct the procedure anyway.

Naturally, Jackson resisted and refused to allow the surgery, but he was then surrounded by 8 cops who held him down as he was put under. When he came to, he was released and in noticeable pain but had no idea what had happened. Jackson described seeing blood in his underwear which made him go back to the emergency room where he found out about the surgery.

“I felt tampered with,” he told the newspaper.

“It’s crazy. It’s over the top, by far,” said Hermann Walz, a longtime criminal attorney and professor at John Jay College of Criminal Justice. “You’re looking for marijuana and cocaine? It’s extreme. If they wanted to cut him open and look at his stomach, that would be OK, too?”

After the surgery, the abuse continued. Days after being forcibly sodomized in a torturous event, Jackson received the bill for the procedure in which the hospital was threatening to turn him over to collections if he didn’t immediately pay $4,595.12.

“The whole thing is cuckoo nuts to me,” said the suspect’s defense lawyer, Charles Keller. “What country are we living in?”

Sadly, the answer to that question is America….

“I don’t believe anybody should have any procedure that is not deemed necessary,” Dr. Paolo said. “If a particular foreign body is not a threat to the patient, then there’s no medical necessity. Doctors are not an agent of the state and not obligated to become an agent of the state.”

“Police can’t have a private citizen break into a car for them,” Dr. Charles Pilcher, a Washington-based emergency room doctor who has researched the topic, told Syracuse.com.

“A physician … cannot be made an agent of the state for the purposes of law enforcement; if an activity being performed isn’t advancing the health care of a patient, then the physician has no business performing that activity,” Pilcher wrote in a 2016 American College of Emergency Physicians newsletter.

Indeed, this entire incident—from beginning to end—should never happen in the ostensible land of the free. For not turning on his turn signal fast enough, this innocent man was kidnapped, brought to a hospital and forced to undergo multiple invasive medical procedures—all carried out by people who claim to “protect” society—all in an attempt to prosecute a low-level misdemeanor “crime.”

To those who think this may be some isolated incident. Think again. The Free Thought Project has been covering this exact same scenario for years. Countless people have been forcibly sodomized, even in public, as police search for non-existent drugs. If you have the courage to do so, you can look through our archives which detail these horrific events.

The time to end the war on drugs is now.