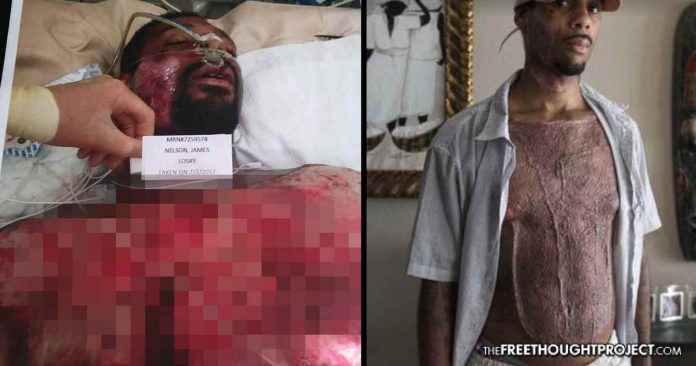 Sacramento, CA — A California man has sued the city of Citrus Heights and several of its police officers for the horrific injuries — skin literally melting off — when police forced him onto the ground of a restaurant parking lot when the temperature was more than 100 degrees outside. The city finally settled this lawsuit, but it was just learned that police and officials forced the victim’s attorney and the victim to stay silent about it. Luckily, the press is not subject to the same terms.

On June 23, 2017, the pavement was estimated to have been around 170 degrees, eight degrees higher than what it takes to instantly destroy human skin. James Bradford Nelson III was thrown to the ground by police and held down, causing his skin to melt off, resulting in third-degree burns on his face, torso, legs, and buttocks.

Nelson suffers from schizophrenia and had been detained that day after a mental episode in the parking lot of a KFC. Police officers were called to the KFC when Nelson was behaving erratically. The shirtless man then fled the restaurant but was taken to the ground, with his bare skin being exposed to the scorching roadway.

Nelson’s mother and stepfather, Tarsha and Barry Benigno, told the Sacremento Bee that they believe the officers were “poorly trained,” and that the injuries Nelson sustained have taken an emotional toll on both him and his family.

The lawsuit contends, “During this time on the ground Nelson was screaming and yelling in excruciating pain,” and adds, “the officers forced his head down onto the hot pavement, leaning onto it with such force that Nelson could not move it for relief, exposing the right side of his face and neck to the scorching heat of the concrete.”

By the time Nelson was brought to the hospital, according to the lawsuit, his body temperature was 108 degrees, and he had second- and third-degree burns over 20 percent of his body. He suffered kidney failure, shock and permanent disfigurement.

“Nelson nearly died from these injuries and required months of immediate care at the UC Davis Medical Center,” according to the lawsuit.

After fighting for justice for over two years for having his skin melted off by cops, the city finally settled the lawsuit, but they did so on their terms — arguably to make sure no one else heard what they did to Nelson.

According to the SacBee:

Two weeks ago, Citrus Heights officials quietly agreed to settle the lawsuit for $1.2 million and a written promise by Nelson and his attorneys not to contact the media or discuss the settlement.

The Sacramento Bee obtained the settlement through a California Public Records Act request to the city clerk.

The settlement, which includes a stipulation that $101,603.56 go to the California Department of Health Care Services “to satisfy the lien for the reasonable value of medical services provided to Nelson,” also states that the city and the officers sued for their actions that day are not liable for any wrongdoing.

The terms of the settlement are clear — no one can say anything about cops melting off the man’s skin.

Hopefully this small settlement helps Nelson get back on his feet, although nothing will ever remove the trauma of being burned alive.

Unfortunately, this is not the first time police have been accused of burning someone in custody. In 2016, an Arizona man, Marc LeBeau, was held on the pavement for two minutes while an Arizona DPS officer laid on top of him, supposedly struggling to place the man in handcuffs.

LeBeau screamed for mercy, begging the officer to take him to the sidewalk. In the end, LeBeau told TFTP in an exclusive that he also suffered third-degree burns over much of his body, including his feet, as he was not wearing shoes at the time.

Predictably, those who can find no fault with law enforcement tactics stood by their officer and stated he was simply following police protocol. LeBeau told TFTP he was denied his request to put on his flip-flops in the blazing Arizona summer heat and was forced to stand barefoot on the ground. This was the same heat that famously melted trashcans.

He said he began dancing to keep his feet from burning, an action unscrupulous cop supporters said indicated he was obviously on drugs. But a drug test later showed he was not under the influence of any alcohol or drugs at the time he was stopped for speeding. Below, LeBeau documented his injuries in a YouTube video:

LeBeau went back to the scene of the crime the day after and quite humbly, one could say, explained how hot it was on the day he was assaulted. He did so by cooking a pork chop on the very spot where he was burned.

Instances like Nelson’s and LeBeau’s highlight one of many possible scenarios. Either the police know how hot the pavement is in over 100-degree heat, and they are trying to punish the suspects, or they are simply ignorant about the possibility that their actions could result in life-threatening injuries.