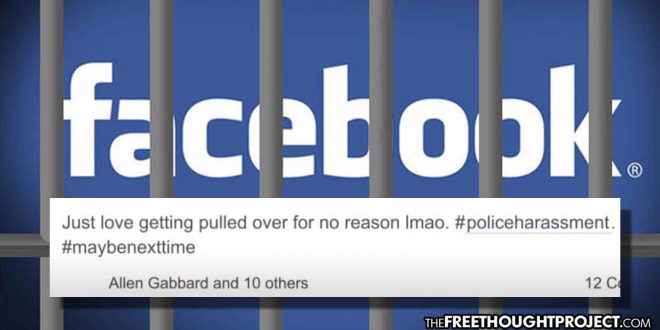 Who do you call for help when it’s the police who are the ones attacking you?

It has been almost three years since David Allen Gabbard got pulled over by a Kentucky state trooper, had his car searched, and was allowed to go on his way. But it’s what happened immediately after the incident which has Gabbard crying foul and suing for justice.

Gabbard did what many people do. He vented on Facebook that he’d been pulled over and harassed by trooper Scott Townsley. His post was peaceful and made no threats whatsoever. He wrote:

Just love being pulled over for no reason lmao. #maybenexttime. #policeharasment (sic)

The next day, three troopers showed up on his front porch apparently wanting a little payback for speaking out against their good names. Townsley was joined by troopers Troopers Joshua Roaden and Brandon Scalf.

Townsley can be heard on camera saying:

Gabbard and his girlfriend, Diana Muncy, who was attempting to record the entire altercation said Townsley then took off his badge and gun and dared Gabbard to fight him “like a man, like a regular citizen”.

According to WDRB, who interviewed Gabbard and Muncy, things escalated quickly after one of the troopers took Muncy’s phone away. Townsley allegedly began slapping and pushing Gabbard, kicking his dog and trying to get Gabbard to fight him.

It was only after one of the troopers noticed video cameras at the residence that the three officers of the peace decide to get their things, get in their cars, and leave.

To put this all into perspective, if three regular citizens had cornered a KY state trooper at his home and pushed and slapped him and challenged him to a fight, and kicked his dog, the three men would be looking at a very lengthy prison sentence. The three men would have been arrested immediately, if the trooper didn’t kill them first, the fellow boys in blue would give them a beat down, and they would be charged with multiple felonies, even felony assault on an animal.

But since the three alleged attackers were state troopers, not only were they not charged with any crimes, they’ve been supposedly drawing their salaries for the three years Gabbard has been seeking justice in the form of a civil rights lawsuit.

At the time of the attack, Muncy actually called 911 several times and asked for police assistance only to be told police were already on the scene. Later, they were told a supervisor was taking care of the complaint.

Years later, the trial against the officers is still proceeding. In 2018, James O’Toole, the couple’s lawyer, was interviewed and explained the seriousness of the matter to WDRB reporters:

Sticks and stones might have been a better thing to throw at Townsley’s supposed thin skin, because names apparently hurt the trooper’s pride and sensibility. Whether or not the allegations against the troopers are legitimate or not will left up to a jury to decide. But the video clearly catches the officers stating they are there for the Facebook post.

However, as we have seen in the past, when it comes to cops on trial, something weird seems to overtake the jury and they’re allowed to walk more often than we at TFTP are comfortable with.

Adding insult to injury, the court system is seemingly delaying justice for the couple with the case being postponed several times. Gabbard is hoping it will take place this summer. If you live in Kentucky and wish to ensure these officers never do this to another citizen, feel free to write the KY State Police.