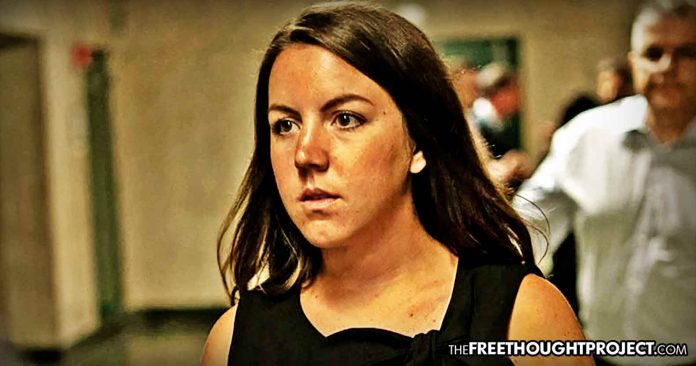 Bronx, NY — A Bronx school teacher, who is also the wife of a Rockland County sheriff’s deputy, admitted to having sex with one of her students. Not only will she avoid jail but she will also not lose her teaching license.

Dori Myers is a 29-year-old social studies teacher in the public school system who apparently just learned the privileges of marrying a cop. This month, she pleaded guilty to a criminal sex act with a child which is a class D felony and requires her to register as a sex offender.

According to court records, Myers was arrested on January 19 of this year and immediately pleaded not guilty. At the time, her attorney said that she is “a model citizen who looks forward to clearing her name.”

This teacher didn’t exactly clear her name, but she did get incredibly lax treatment, especially considering the fact that the state of New York currently hold tens of thousands of people in jails for non-violent drug crimes.

Myers entered her guilty plea a day earlier than she was supposed to in an apparent attempt to avoid the media swarm. However, the NY Post obtained all the details of the trial and they are nothing short of infuriating.

Instead, Orbus promised to give her 10 years’ probation.

Defense lawyer Andrew Stoll said Myers will be fired by the city Department of Education “and won’t be working for them anymore,” but asked the judge not to make her give up her license, according to a court transcript obtained by The Post.

“There is a possibility that she could teach adults now or in the future and we want to preserve that possibility,” Stoll said. “She still is a talented teacher and has those skills, and I don’t see any reason to destroy her ability to make a living and to contribute to society in a positive way.”

Insanely enough, the judge agreed and did not revoke her license.

As the Post pointed out, the judge relented, but added, “This would be a matter that any licensing agency will be able to consider, if they choose to do that, and of course any employer.” The state Education Department typically reviews such cases to determine whether to revoke an educator’s license.

Orbus also noted, “I just want to make the record clear that Ms. Myers is aware that she must register as a sex offender.”

Registered sex offender or not, this admitted child predator will not be going to jail and may someday be back in the classroom where she could strike again.

Blue privilege, it seems, even extends to statutory raping spouses.

As TFTP reported, this privilege was shown to be extended to the children of police officers. Last year, a 23-year-old man in Indiana pleaded guilty to molesting a 13-year-old foster child living with his family, and was sentenced to just three years of house arrest.

Andrew Taylor is the son of Tim Taylor, the police chief in his hometown of Berne, Indiana. Taylor asked the young girl who had been placed with his family “to perform oral sex on him and she agreed” in October. He then told his father about what he did and turned himself in, according to court documents. Like Myers, instead of going to jail, he flexed his connections. An injustice indeed.