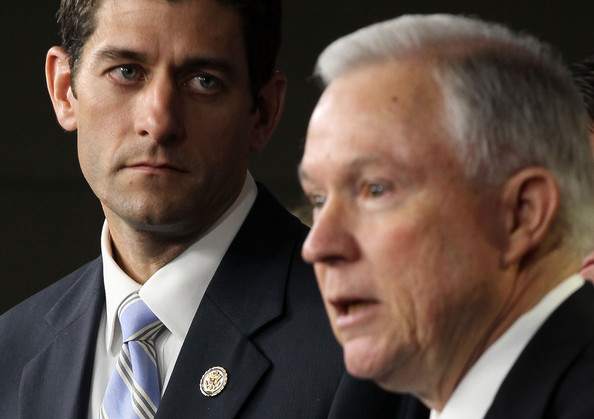 Yes, both of these men are corrupt. Attorney General Jeff Sessions and Speaker of the House Paul Ryan (R-WI) have stepped in to defend Deputy Attorney General Rod Rosenstein. For Ryan’s part, he is dismissing several Republicans attempts to impeach Rosenstein for his obstruction of justice in the investigation of President Donald Trump over alleged Russian collusion and the witchhunt that has ensued as a result.

I just filed a resolution with @Jim_Jordan and several colleagues to impeach Rod Rosenstein. The DOJ has continued to hide information from Congress and repeatedly obstructed oversight–even defying multiple Congressional subpoenas.

We have had enough.

”For 9 months we’ve warned them consequences were coming, and for 9 months we’ve heard the same excuses backed up by the same unacceptable conduct,” Meadows said in an official statement. “Time is up and the consequences are here. It’s time to find a new Deputy Attorney General who is serious about accountability and transparency…”

As Ryan pushes back on articles of impeachment that were submitted by several Republicans on Wednesday, The Wall Street Journal reports:

“I don’t think we should be cavalier with this process or with this term,” Mr. Ryan said, referring to impeachment. He said House Republicans have received a “great deal” of cooperation from the department on their records requests.

Given the pushback, lawmakers backing impeachment are also considering the lesser move of holding Mr. Rosenstein in contempt of Congress for what they see as attempts to withhold certain facts, said Rep. Mark Meadows (R., N.C.), who filed the impeachment resolution.

House members are heading home this week for their August recess, so any effort is on hold for several weeks.

Cavalier? It’s been going on for going on two years and Rosenstein is hindering the information coming out to Congress. Rosenstein is the one being cavalier, Mr. Ryan, and now so are you.

In fact, by not going along with impeachment, which is a constitutional action in cases like this, Ryan is being complicit in the obstruction of justice that Rosenstein is involved in.

What’s even more telling about Ryan is that House Minority Leader Nancy Pelosi (D-CA) agrees with him not going forward with impeachment. Of course, she does! She’s a central part of the corruption.

The rare alliance of Ryan and Pelosi means that the impeachment measure has little chance of advancing. House members did not vote on the matter before adjourning Thursday for a five-week recess.

“The attack on Rosenstein, of course, is an attack on the Mueller investigation,” Pelosi said. “Just when you think you’ve seen it all, Republicans have no shame…What they’re making is a statement: ‘President Trump is above the law.’ If they bring it up (for a vote), they have a price to pay for going that route.”

Said Ryan: “Do I support impeachment of Rod Rosenstein? No, I do not. … I don’t think that this rises to the level of high crimes and misdemeanors.”

In DC, nothing, and I repeat nothing “rises to the level of high crimes and misdemeanors for the corrupt representatives speaking on your behalf, America.

I don’t want to say I told you so to those of you out there who wanted to put this guy and Mittens in the White House in 2012, but… I told you so. Neither of those men are conservatives. They are just as corrupt as the Commie Democrats, maybe even more so because they try and hide it behind a veneer of “conservatism” and “constitutionalism.”

To make matters worse, and no one paying attention is surprised by this, Attorney General Jeff Session, who is all bark and no bite for the most part, sides with Ryan and Rosenstein.

Sessions said Congress should focus its attention on toughening U.S. immigration laws instead of impeaching his deputy.

“My deputy Rod Rosenstein is highly capable,” Sessions told reporters at a news conference in Boston. “I have the highest confidence in him.”

Of course, Sessions has his own levels of corruption and anti-constitutional ideology and actions.

Ryan has said he will be stepping down this year. Perhaps, it’s time that Republicans in the House coordinate together to impeach Ryan for his complicity in Rosenstein’s obstruction and oust him sooner rather than let him leave later.

City Mayors Working Directly With UN as US Government Surrenders Authority to WHO (Video)
May 18th, 2022 Sons of Liberty Media