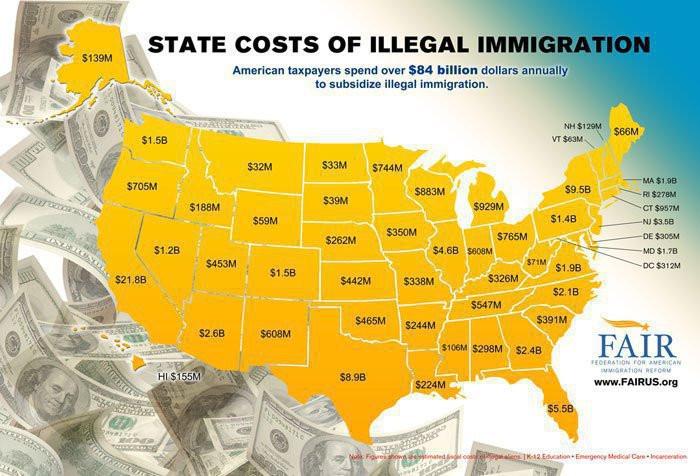 Consider this summary of a study from the Center of Immigration Studies, www.cis.org:

“The findings of this analysis show that the average cost of a deportation is much smaller than the net fiscal drain created by the average illegal immigrant. Immigration and Customs Enforcement (ICE) reported the average deportation cost as $10,854 in FY 2016. In FY 2012, ICE removed 71 percent more aliens with a similar budget, creating an average inflation-adjusted cost of $5,915. This compares to an average lifetime net fiscal drain (taxes paid minus services used) of $65,292 for each illegal immigrant, excluding their descendants. This net figure is based on fiscal estimates of immigrants by education level from the National Academies of Sciences, Engineering, and Medicine (NAS). The total fiscal drain for the entire illegal population is estimated at $746.3 billion. Of course, simply because deportation is much less costly than allowing illegal immigrants to stay does not settle the policy questions surrounding illegal immigration as there are many factors to consider. Steven A. Camarota is the director of research at the Center for Immigration Studies, 8/3/17 (Reported in www.CarryingCapacityNetwork.org)

Your two U.S. senators and Congressman/woman bring this nightmare to you every year, year after year, decade after decade. Since the latest figure of illegal immigration now stands at 22-25 million illegal aliens per the October 2018 Yale University Report, you, the American taxpayer might feel a huge vacuum sucking your wallet right out of your pants or your purse.

And, yet, such famous Congressional Critters like Nancy Pelosi or Chuck Schumer, who dominated Congress for the past 40 years, continue to tell you, “There is no crisis at the border.” Except, the U.S. Border Patrol reported a record of 78,000 illegal alien violated our borders in February. With 22 to 25 million illegals in our country, perhaps Pelosi and Schumer remain out of touch with reality.

How about this sobering figure as to LEGAL immigration?

David Durham, director at CCN, said, “If the 1.5 to 1.6 Million Annual Legal Immigrant Inflow were cut to 150,000/Year (i.e., Zero-Net Annual Immigration = Emigration), Federal Deficit could be reduced by One-Half Trillion $ in a Decade!

What is Carrying Capacity Network?

After much research on the issue of legal and illegal immigration, everything becomes SO depressing. That’s why I stand with and support organizations that actually take action on behalf of American citizens. As you know, the invasion of our country continues because not enough people stand up and push back.

We either stand together and stop this legal/illegal immigration invasion or our children face a really sobering future. In order to educate yourself please check out: www.CarryingCapacityNetwork.org

As I’ve written hundreds of commentaries for the past 30 years, we either stop endless and massive immigration into America, or we’re not going to enjoy an “America” and the “American people” ever again. We’re literally galloping over a demographic and sociological cliff.

By joining such organizations as www.CarryingCapacityNetwork.org , you give yourself a powerful voice by joining with millions of other Americans who care about the future of our country.