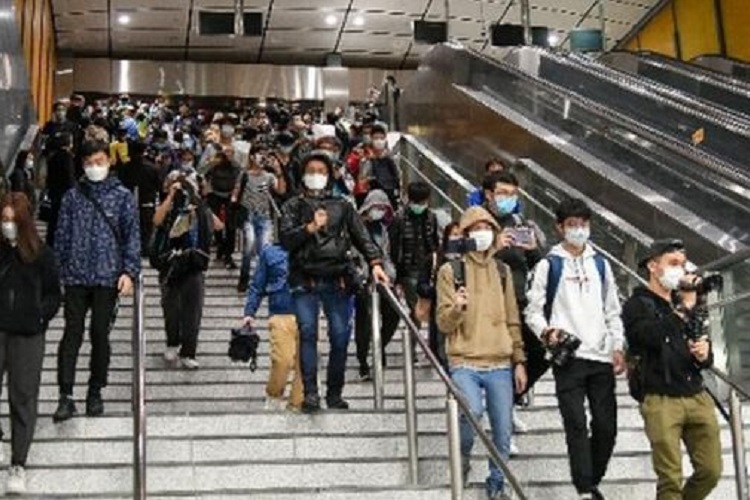 The COVID-19 operation was fraying badly:

Protests against the lockdowns were expanding.

The public-health measures (distancing, isolation, masks) were being attacked from all sides, as unnecessary, useless, overbearing, and unscientific.

Many mainstream researchers, doctors, and even public health officials were exposing the fact that the pandemic was no pandemic at all. The adjusted case and death numbers didn’t warrant excessive concern.

It was becoming obvious that the players setting the COVID agenda were there simply because they had been appointed to high posts; not because they were perceptive or honest scientists. In other words, COVID was political.

On top of all this, economies were beginning to re-open; for the public, that was the main focus, not the threat of catching a disease.

There was a great need for an operational shift. How and why didn’t particularly matter, as long as the populace was riveted by some new catastrophe.

This shift would also stall the economic engine (again). After all, stripping away the mountain of lies about COVID, the core at the center of it WAS an economic attack.

A new reason for a different form of lockdown.

The daily protests in the streets overtake and replace the former protests against the COVID lockdown.

One operation covers another.

Television news producers wipe all the COVID coverage off one side of the screen, and bring riot coverage in from the other side of the screen. It’s exactly like theatrical scene shifts on stage, between act one and act two of a play, as the crew rapidly moves flats and props while the certain is down.

Elite Global planners like Bill Gates obviously think this is their moment. Under the pretext of the COVID story they’ve created, they want to install the next phase of their technocratic Brave New World.

Planetary surveillance, at a level that supersedes the present system—deploying thousands of new satellites—is the leading edge of this phase. “We must do it, in order to mount an early warning system for new pandemics.”

Kicking technocracy into a higher gear requires sustaining the COVID fairy tale. Since that tale was falling apart, hide it under the storm of the George Floyd riots and protests sweeping across America.

Covering one operation with another is standard business in the covert ops field. The 9/11 attacks in 2001 were, as planned, followed by justified wars against Afghanistan and Iraq. “That’s where the terrorists have their bases.” Among other purposes, the wars cemented in place the false 9/11 narrative and guaranteed that narrative a place in history.

Among other purposes, the Great Depression of the 1930s covered and buried the planned 1929 crash of the stock market.

Consider this fictional illustration. In an area of forest 30 miles from a town, people discover a large patch of dead trees. Some have fallen over. Others, leafless and gray, are still standing. At first, no one takes action. Then, it’s obvious the patch is growing larger. More trees are falling down. More branches and leaves are drying up and dropping on the ground.

This event is an operation.

It needs a second operation to cover it. And here it is:

The town newspaper, aided by pronouncements from local officials, runs a story about a fire. There was a fire in that part of the forest. It was “so severe and hot, its effects are still being felt.” NOW, people begin arguing about the cause of the fire. It was a lightning hit. Someone set a blaze, using flammable liquid that burned at an exceptionally high temperature. Drug dealers fought with one another and burned up the drugs.

Actually, six months ago, a town firm that secretly sells a dangerous and illegal pesticide, believing they were about to get busted, sent employees with drums of the poison into the forest to dump them. That’s what happened. That was the first operation.

But the second op, the fire story, is now so ingrained in minds, few people will consider there was no fire…THERE HAD TO BE A FIRE.

And just to make sure, agents of the pesticide company now set a few fires in the surrounding area of mountains. The town paper runs a story: “Who is setting ALL THESE fires?”

One operation covers another.

Regardless, covers work. They’re used. They grab attention, cause fear, shift focus away from an op that is running out of steam or is about to be exposed.

In the middle of a city, a great edifice stands. It took a hundred years to build. Every day, when citizens pass by it, they salute, they leave offerings, they even kneel and pray. It’s clearly understood that this magnificent structure will last forever.

But one day, people notice one wall is beginning to crumble. Stones have been falling out. There are holes. And when people peer in, they see empty dusty rooms, and smell acrid odors. This news must be spread to the populace.

But suddenly, out of nowhere, a great mob appears. They’re carrying torches and setting fire to other structures.

Run. Hide. THIS is a terrible threat. This is the true crisis. Not the hundred years of deception.

This article (COVID-19 and Riots: the Operational Connections) was originally created and published by Jon Rappaport’s Blog and is re-posted here with permission.