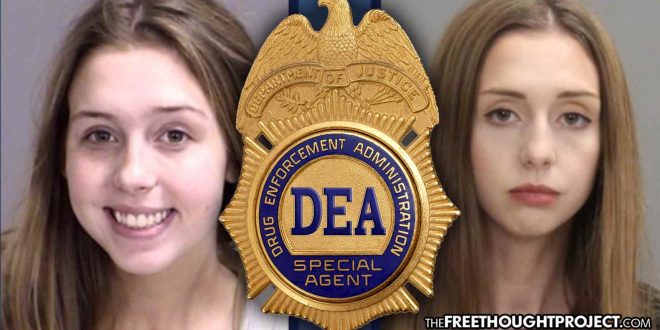 “You don’t see many drug traffickers retire,” gloated Bill Furay, then-head of the DEA’s office in Beaumont, Texas, following the arrest of a wealthy couple from a tiny neighborhood in Pearland. “Either they end up in prison, or they end up dead.”

Furay, who has since retired from his life of kidnapping and caging people for arbitrary substances deemed illegal by the state, apparently never had time to give that lecture to his teenage daughter, Sarah — who was arrested in 2015 on drug-trafficking charges that just resulted in an 8 year prison sentence.

Furay, a drug dealer who received international attention following her 2015 arrest in College Station, was sentenced earlier this month in a Brazos County courtroom to eight years in prison.

According to KBTX, a spokeswoman for the district attorney’s office says Sarah Furay, who now lives in the Houston-area, received eight years in prison for each of the three drug trafficking charges and the maximum two-year sentence on her single charge of possession of marijuana.

Sarah pleaded guilty in October and was sentenced this month.

As TFTP reported at the time, Sarah made international headlines because of her good looks and her smiling mugshot. She was deemed by the media as the world’s “most adorable drug kingpin.”

The irony of her father’s job was deep and exposed the dirty underbelly of the war on drugs and its utter failure. When top DEA officials cannot stop their own children from becoming drug kingpins, it’s time to admit that the DEA shouldn’t even exist.

As the late and great Will Grigg wrote for TFTP in 2015:

For many years, Furay styled himself the implacable scourge of drug dealers, becoming a familiar presence at triumphant DEA press conferences announcing mass arrests and seizures of contraband and proceeds.

“Basically, we’re targeting criminal organizations, gangs, trying to hit them where they live and breathe,” Furay boasted following a large-scale bust following “Operation Blood Loss” in 2009. “Operation Agent Orange” in June 2010 propelled Furay into the spotlight yet again: A multi-jurisdictional narcotics task force staged a massive operation spanning several counties to arrest 60 people allegedly involved in a drug-trafficking ring tied to Mexico’s Sinaloa narcotics cartel. US Attorney Malcolm Bates described the narcotics operation as the “United Nations of drug trafficking.” Like most initiatives of its kind, Agent Orange began with information sweated out of low-level dealers seeking a “downward departure” in sentencing in exchange for leniency.

The crackdown netted dozens of suspects, including “Mexicans, Hondurans, Mexican-Americans, African-Americans, Anglos and at least one Pakistani and one Israeli citizen,” according to the Houston Chronicle. “People with first names such as Jesus and Omar are accused of doing business with Mohammad, Shannon, Heather, and Ken.”

“It was like they were delivering pizzas,” commented Furay during a press conference. “It was delivery after delivery.” Furay’s comrade Zoran Yankovich, who headed the DEA’s Houston Division, boasted that Operation Agent Orange “decimated the Pineda organization that was operating in our region and responsible for the distribution of numerous pounds of methamphetamine and cocaine nationwide.”

Taking out a drug syndicate is an exercise in futility akin to bailing out the Pacific Ocean with a thimble. When the DEA “decimated” one narcotics syndicate, all they did was create an opportunity for another one to fill it. While Furay was busy with sting operations, controlled buys, and self-aggrandizing press conferences, he apparently neglected to supervise his young daughter Sarah, who was arrested at her College Station home on November 8, 2015 and faces a variety of narcotics-related charges.

That terrifying prospect notwithstanding, the winsome Miss Furay can be seen smiling broadly in her booking photo, which has been called the “happiest mugshot in America.” After spending a day in jail, the 19-year-old, referred to in press accounts as an “adorable drug kingpin,” posted $39,000 bond and was released.

Although Sarah’s parents are divorced, and her mother has since remarried, “having a mom and dad with well-established positions within departments of law enforcement and education certainly doesn’t hurt when it comes to getting your drug-dealing ass out of jail,” commented Death and Taxes. “Having a mother with strong ties to the community and as a school administrator gives Furay’s attorney the opportunity to argue [the] client as a low flight-risk.”

She did not escape jail, however. What’s more, there is a strong possibility as well that her less-than-admirable life choices reflect the fact that her father was too busy putting other people’s children in prison to give his own daughter the parental attention she needed – but this type of occupation-specific neglect is fairly commonplace among those who enforce drug prohibition.

During a DARE graduation in Payette, Idaho several years ago, Larry McGhee, the state DARE coordinator (and a high-ranking official in the state Peace Officer Standards and Training academy), shared a story in which he contrasted the fates of two young women named Tracey and Brianna. According to McGhee, Tracey was raised in a very good family, but “she didn’t have the DARE program.” So despite her advantages Tracey found herself in the company of disreputable, drug-using peers and became addicted to methamphetamine. She was able to graduate from high school, but dropped out of college. She went on to have three children by three different men, none of whom she married.

Brianna, on the other hand, came from a poor and troubled home presided over by a drug-addicted single mother. However the DARE program helped her overcome her disadvantages, at least as McGhee told the story, and at the time she was an academically successful 17-year-old surrounded by supportive friends and facing a promising future.

At this point in his address, McGhee went full-M. Night Shamalyan, revealing what he apparently regarded as a breathtaking twist in the narrative: Brianna’s drug-addicted mother was none other than Tracey and McGhee continued, adding a pike to his twist, Tracey was his own 37-year-old daughter.

The lesson, according to McGree, was that it such things can happen to a 30-year veteran police officer — the state coordinator for DARE — no family could possibly be immune to the scourge of drug addiction. A more compelling moral to the story would be that parents should be reluctant to entrust the moral and character education of their children to a program presided over by someone who, by his own public admission, experienced such a tragic failure in raising his oldest daughter.

The larger public policy lesson taught by both McGhee’s experience and the sentencing of William Furay’s so-called teenage “kingpin” daughter is that drug warriors should spend their time teaching sound moral lessons to their own children, rather than filling prisons with non-violent offenders, and the coffers of law enforcement agencies with plundered loot.