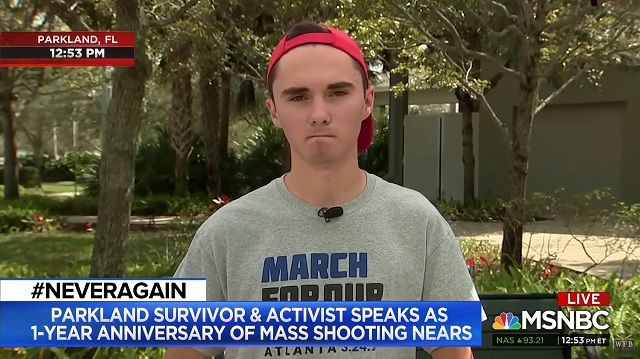 While wearing a backwards baseball cap on live TV, anti-gun activist David Hogg told MSNBC’s Andrea Mitchell that AR-15 owners are not “defending” themselves but instead “hunting” human beings.

After telling viewers that Americans need to find unity in addressing gun violence, Hogg was asked about his recent efforts to ban certain kinds of semiautomatic firearms at the state level. He said he and other March for Our Lives activists had introduced a ballot initiative to ban so-called assault weapons in Florida. He said those who own an AR-15, the most popular rifle in the United States, want to hunt other people.

The National Shooting Sports Foundation, the trade group for the firearms industry, estimated last year that more than 16 million AR-15 and similar rifles had been produced or imported to the United States over the past 25 years. Still, Hogg said no civilians should be allowed to possess those kinds of firearms.

I don’t know whether to be more offended by his backwards baseball cap or the fact he wants to take away the gun rights of millions of law-abiding Americans.