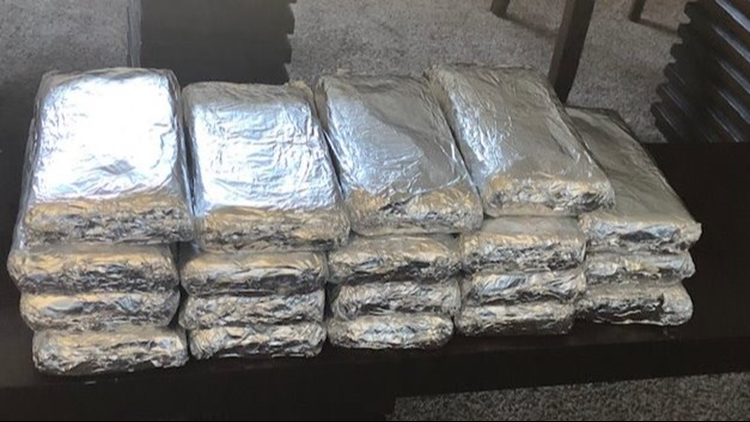 Fentanyl has been known to be not just addictive but deadly. Recently, more than 44 pounds of suspected fentanyl was seized, which authorities claim is more than enough to kill Ohio’s entire population “many es over.”

As part of an investigation, authorities with the Miami Valley Bulk Smuggling Task Force which is part of the Ohio Attorney General’s Ohio Organized Crime Investigations Commission, Federal Bureau of Investigations Safe Street Task Force and the RANGE Task Force arrested Shamar Davis, 31, Anthony Franklin, 30, and Grady Jackson, 37, of Dayton, Ohio. All are facing a charge of Possession with Intent to Distribute 400 or more grams of Fentanyl and Felon in Possession of a Firearm.

“These illegal drugs ruin lives, destroys families, fuels violence, drives up property crime, and wrecks neighborhoods. Anyone associated with it—especially those who sell and traffic it—are doing violence to people and causing harm in our communities,” said Sheriff Rob Streck. “We are proud of the teamwork on this investigation. With the help from our partner agencies, we were all able to take dangerous drug dealers off the streets.”

“The quantity of fentanyl, in this case, amounts to chemical warfare and a weapon of mass destruction,” Yost said. “I applaud the work of our task force and our law enforcement partners – this is an enormous amount of deadly drugs that will no longer be on our streets.”

“Fentanyl and methamphetamine are responsible for the vast majority of overdose deaths in our area, removing these materials from our streets will save lives,” said Montgomery County Coroner Dr. Kent Harshbarger.

“Twenty-kilograms of fentanyl is enough to kill the entire population of Ohio, many times over,” said Vance Callender, Homeland Security Investigations special agent in charge for Michigan and Ohio. “As this significant seizure makes clear, HSI and our partners are united in our resolve to protect our communities and our country from the deadly scourge of drug trafficking. We stand ready to use every tool and resource at our disposal to attack and dismantle these organizations from the low-level dealers to the source of supply with our law enforcement partners.”

“This multi-million dollar fentanyl seizure clearly shows the enormity of the opioid problem in this area,” stated Acting Special Agent in Charge Joseph M. Deters of the FBI’s Cincinnati Division. “Law enforcement will continue to work aggressively to address the illegal drug supply, but there is also a continuing need to address demand as well.”

While I think the war against natural medicines, including marijuana, should be abandoned, synthetic drugs like this, along with a host of pharmaceutical drugs are the ones the should be dealt with and so should their manufacturers.

For more on the damage of pharmaceuticals and their impact and the criminals manufacturing them, check out my interview with Marianne Perez, who lost her daughter to oxy-contin and became a journalist and activist to expose corrupt and criminal Big Pharma.