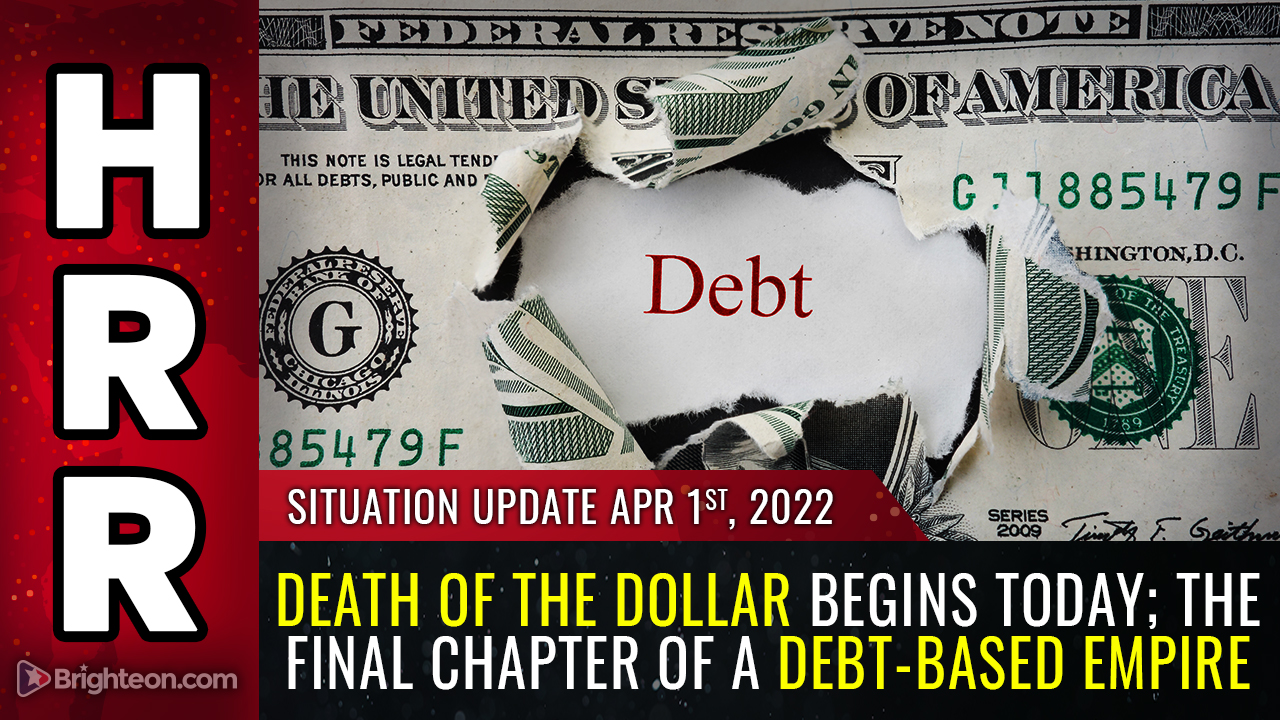 (Natural News) “If you want gas, find roubles.” Those are the words of Vyacheslav Volodin, the speaker of the lower house of the Russian parliament, as reported by the BBC this week. The story follows up with a bombshell that has been scarcely reported:

The Kremlin also said Russia could start demanding payment in roubles for other commodities such as fertiliser, grain, metals and timber.

The ruble requirement begins today. It won’t be demanded across all energy contracts immediately, but it will be rolled out across existing contracts over the next several weeks and months, Russia says. Many European nations (like Germany) depend almost entirely on Russian gas to power their economies. The day that the gas stops flowing is the day that Germany’s economy plunges into collapse, suffering irreversible economic damage due to mass bankruptcies of German-based businesses.

“Germany and Austria have taken the first steps towards gas rationing,” the BBC adds. Austria relies on Russia for 80% of its natural gas.

European leaders have said they refuse to pay for Russian energy exports with rubles. But these same nations took part in a financial system de-platforming of Russia that means Russia is largely unable to use dollars or euros. So there’s no point in Russia trading gas for fiat currencies that it can’t use and doesn’t want.

In fact, as long as the West’s economic sanctions are in place, if Russia were to sell gas for dollars or euros, that would be the equivalent of giving away its natural resources for free.

And no country is going to give away energy for free. Especially not to a group of “unfriendly” nations that unleashed economic warfare against you in the first place.

Watch the ruble climb as it is backed by energy, commodities and gold

The ruble has already achieved a full recovery from its initial plunge following the economic sanctions put in place by the West. While the corporate media was initially claiming Russia’s currency would collapse within days, quite the opposite has happened. Russia’s currency is actually climbing steadily in value while the dollar, the euro and the yen are all losing value at a shocking rate.

In terms of real purchasing power in America, the dollar is actually losing an astonishing 2% per month. If you have dollars in a bank account, you are effectively earning negative 2% interest every month in terms of the loss of its actual value. To make matters even worse, Biden has proposed a $5.8 trillion federal spending spree for 2023, meaning the government will be spending nearly $1 trillion every other month. And that doesn’t count the bailout money that’s coming in 2023, which will likely reach several trillion dollars all on its own. We aren’t far from the US central bank printing a trillion dollars a month.

Putin, on the other hand, made a tactically brilliant move in demanding payment in rubles because that will drive demand for rubles for years to come. The petro dollar is now giving way to the hydrocarbon ruble. Since Russia sits on about 30% of all known natural resources in the world, tying the ruble to those natural resources instantly makes the ruble a store of value, especially given that every nation in the world needs energy, grains, minerals, timber and other resources that will be linked to the ruble.

Nobody needs dollars, really, since dollars are a failing fiat currency that’s being devalued by the day. It’s sort of like investing in an athlete who just jumped out of an airplane without a parachute. What people need are things like food, heating fuel, electricity, oil and so on. This is what Russia’s exports provide. This is what’s backing Russia’s new vision for the ruble.

All the top financial minds see this unfolding in real time. It is irrefutable that the dollar goes to zero. Because of this realization, every person who is capable of grasping this reality is fleeing the dollar and shifting into other things that tend to hold value:

Some people are also shifting funds into cryptocurrencies, vaulted precious metals or fiat currencies of other nations.

I spoke with a vaulted gold service provider yesterday and they confirmed they are slammed with new business as thousands of people are signing up to buy either physical gold or vaulted (stored) gold that’s held for them. The gold service providers on the front lines are simply being overrun with demand.

The ignorant masses who stupidly believe the corporate media, of course, will be utterly wiped out when the dollar goes to zero. They will be stunned, surprised and betrayed, unable to understand that their gullibility lead to their financial demise. Many will starve, others will be left homeless. Some will turn to crime to try to survive, and some of those will end up getting shot by the well-prepared who are defending their preps.

When the dollar goes to zero, the U.S. empire of debt collapses with it. The debt was never sustainable, of course. And MMT was never anything but a silly delusion. Sure, the government will try to push a Central Bank Digital Currency (CBDC), but no one with any IQ points at all will want anything to do with the system, especially after realizing how badly everyone was deceived and betrayed by the central banks’ crashing of the fiat dollar. (Inflation doesn’t go away just because you make money digital. If anything, it only invites even more rapid money printing and currency devaluation.)

Today’s Situation Update covers all this in much more detail: