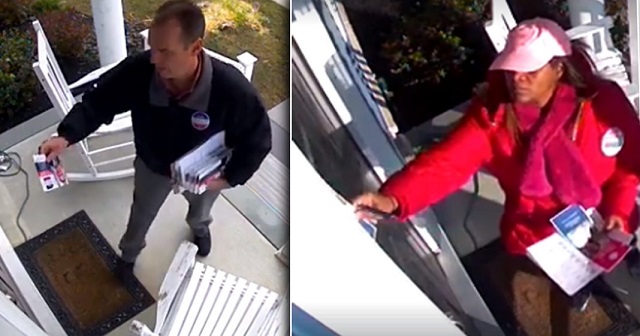 We’re witnessing the third-worldization of America in real-time.

A Delaware state representative candidate apologized on Facebook Monday after she was caught on surveillance video removing her opponent’s campaign literature from outside a Middletown, Delaware, home and replacing it with her own.

“Today, I ask for the forgiveness of the residents of the 9th Representative District,” Monique Johns wrote. “I made a mistake. I removed the literature of my opponent’s campaign from the door of a voter. It was wrong and I should never have done it.”

Youngsun “Sunny” Park, a Democrat, was arrested Friday after police received reports that she and an unnamed male were taking campaign signs, the Buena Park Police Department said.

A video shared by police shows the man closing a car door with signs in the backseat that have Park’s name on it and the word “carpetbagger,” a term is used to describe someone running for office in an area to which they aren’t connected.

She was cited by police and released, KCLA-TV reported.

The Democrats are trying to steal our entire country the same way they’re stealing our campaign signs. Make sure to get out and vote these midterms (you can vote early in many locations already) because with Democrat-voting caravans coming in every few days this situation is only going to get worse.