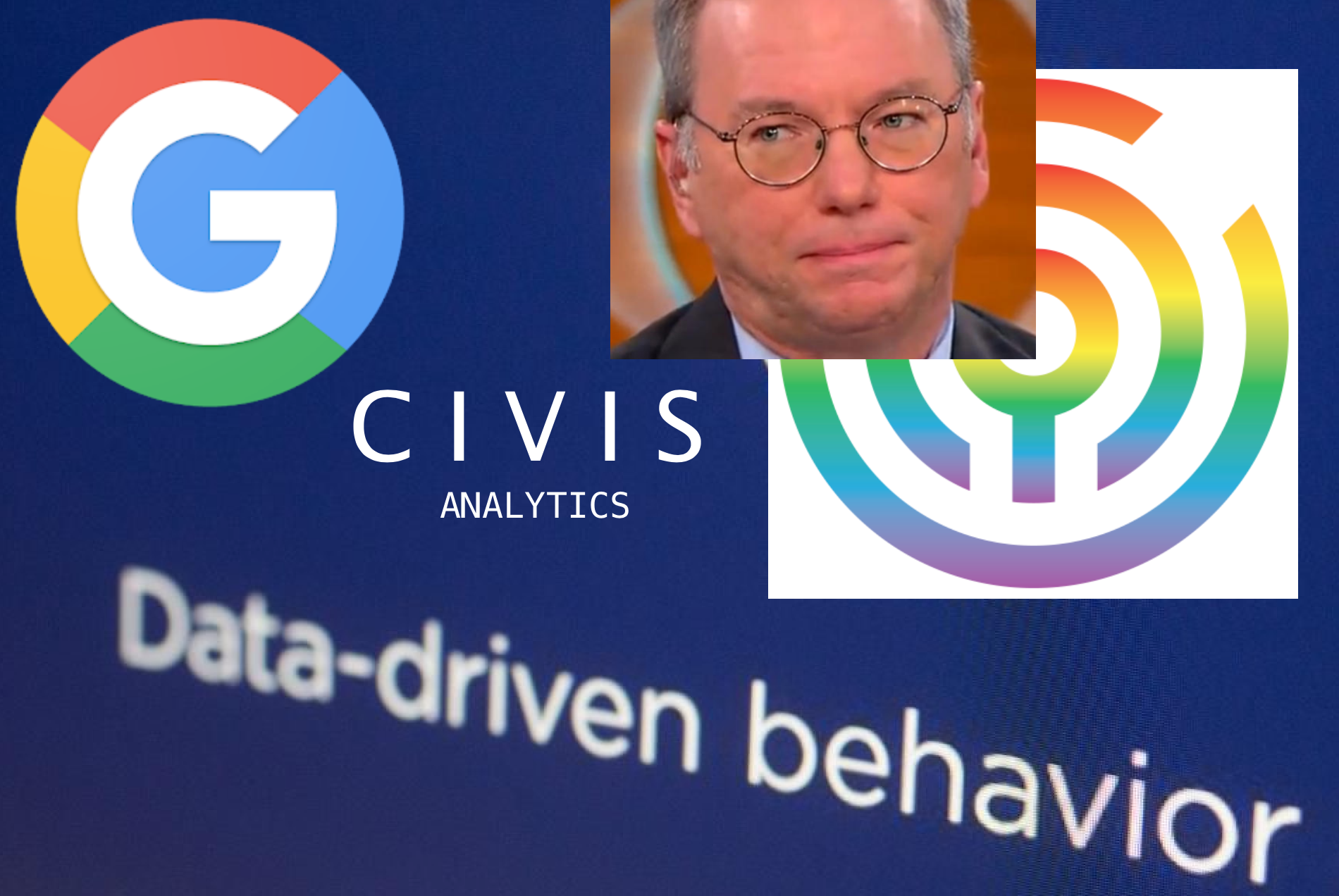 A data firm backed by Eric Schmidt, the former executive chairman of Alphabet, Google’s parent company, has been paid millions of dollars by Democratic committees and is currently working for Joe Biden’s presidential campaign.

Wait, what? How is this different than Cambridge Analytica which the left used much the same way as the Nazis used the Reichstag fire. The trumped up ‘scandal’ was used to shut down free speech on social media channels namely Facebook.

Cambridge Analytica was a consulting firm which combined data mining, data brokerage, and data analysis with strategic communication during the electoral processes. The company closed operations in 2018 in the course of the Facebook–Cambridge Analytica data scandal, although related firms still exist. The media blew up a “major political scandal” saying CA

….had harvested the personal data of millions of people’s Facebook profiles without their consent and used it for advertising purposes.

The three major news organisations published simultaneously on March 17, 2018, and caused a huge public outcry. More than $100 billion was knocked off Facebook’s share price in days and politicians in the US and UK demanded answers from Facebook CEO Mark Zuckerberg. The scandal eventually led to him agreeing to testify in front of the United States Congress.

The scandal was significant for inciting public discussion on ethical standards for social media companies, political consulting organizations, and politicians. Consumer advocates called for greater consumer protection in online media and the right to privacy as well as curbs on misinformation and propaganda. (Wiki)

How much information has Google harvested from our the personal data? They have far more access than Facebook.

A data firm backed by Eric Schmidt, the former executive chairman of Alphabet, Google’s parent company, has been paid millions of dollars by Democratic committees and is currently working for Joe Biden’s presidential campaign.

The idea for what became Civis Analytics emerged in the wake of President Obama’s 2012 re-election when Schmidt pitched Dan Wagner, the campaign’s chief analytics officer, on creating a lasting political data and website services firm. Schmidt, who remained an executive at Google and Alphabet, went on to quietly aid Hillary Clinton’s 2016 presidential campaign. Less than one month after the elections it was announced that he had helped round up $22 million for Civis, where he is also a partial owner and sits on the group’s board of directors. In June, Schmidt stepped away as executive chairman of Alphabet, although he now acts as a technical advisor to the company’s leadership on policy issues.

Civis has provided data and tech services for a number of Democratic committees in recent years, with its most recent payments coming from the Democratic Congressional Campaign Committee (DCCC), which paid $63,400 for polling and website services during the first quarter of the 2020 cycle; the Democratic National Committee (DNC), which dished $33,900 to the firm for data analytics; Planned Parenthood Votes, which also pushed $33,900 to Civis for data analytics; and NextGen Climate Action, liberal billionaire Tom Steyer’s committee, which paid $16,000 for data and consulting services.

In addition to the committees, the presidential campaigns of Sens. Cory Booker (D., NJ), Elizabeth Warren (D., Mass.), and failed Senate candidate Robert “Beto” O’Rourke have also combined to pay tens of thousands for its services during the first three months of the year. Civis Analytics announced in late April that it will be working with Joe Biden’s presidential campaign for the 2020 election cycle, Bloomberg reported. Civis appears to be expanding its political team in Washington and New York, according to job postings on its website.

Throughout the 2018 cycle, Civis collected more than $4 million from Democratic committees, filings show. Its biggest client throughout the midterm elections was the Senate Majority PAC, which cut more than $2 million worth of checks to the firm for research services.

Civis was “born” out of the Obama campaign, and the team that Schmidt had coached was credited with securing the president’s reelection.

“Schmidt had a particular affinity for a group of engineers and statisticians tucked away beneath a disco ball in a darkened corner of the office known as ‘the Cave.’ The data analytics team, led by 30-year-old Dan Wagner, is credited with producing Obama’s surprising 5 million-vote margin of victory,” Bloomberg reported in 2013.

He maintained close ties with Democrat power players after 2012 as well. An attachment in the hacked emails of John Podesta and discovered by the Washington Free Beacon verified that Schmidt was working directly with Clinton’s campaign. The memo mentioned the work being performed by “Eric Schmidt’s group” but did not outright state its name.

Civis is not the only liberal tech firm that Schmidt has helped to launch with veterans of Obama’s 2012 team. He provided funding to a tech startup called The Groundwork, which was launched by Michael Slaby, the chief integration and innovation officer for Obama’s campaign. Slaby developed The Groundwork through another company he co-founded called Timshell. The Groundwork was ultimately paid nearly $700,000 for “technology services” by Clinton’s campaign and Schmidt appeared at Clinton’s election night “victory” party wearing a staff badge.

Pamela Geller has been the subject of a profile on 60 Minutes, and of cover stories in the Sunday New York Times Metro section and the UK’s Independent. The Times also published an in-depth interview with her. She has made appearances on NBC Nightly News, ABC, CNN, AP, Reuters, the Sean Hannity Show, the Bill O’Reilly Show, Red Eye, Geraldo, the Mike Huckabee show, and other shows on the Fox News channel. She has been featured in the New York Times, the Washington Post, the Los Angeles Times, the Village Voice, the Daily Mail and the Telegraph.