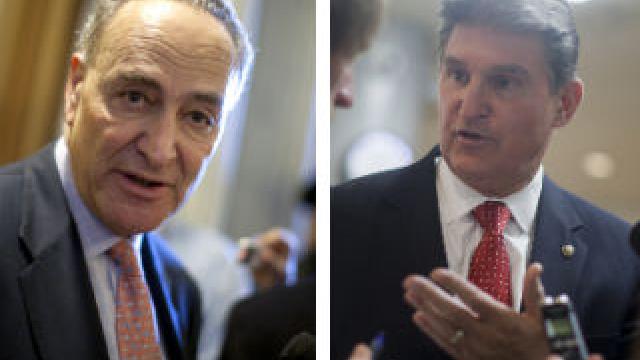 As the debate over Trump Supreme Court nominee Brett Kavanaugh heats up, the Democrats are divided.

It seems West Virginia Senator Joe Manchin is not going to be told what to do by Senate Minority Leader Chuck Schumer.

Manchin suggested to Politico that Schumer does not have any influence over whether or not he supports Brett Kavanaugh’s nomination.

“I’ll be 71 years old in August, you’re going to whip me? Kiss my you know what,” Manchin told Politico, referring to whipping votes among the party caucus.

Manchin is not the only Democrat threatening to break ranks on the Kavanaugh confirmation. Avery Anapol writes:

…Democrats up for reelection in Trump states are not guaranteed votes against the confirmation, and many have signaled that Schumer’s efforts may not be enough to convince them to vote against the nominee.

“My decision won’t have anything to do with Chuck Schumer,” Sen. Joe Donnelly (D-Ind.) told Politico. Donnelly, in addition to Manchin and Sen. Heidi Heitkamp (D-N.D.) all voted in support of Neil Gorsuch.

Sen. Claire McCaskill (D-Mo.) told Politico that Schumer “knows better” than to try to pressure her to vote a certain way.

“He doesn’t come to me and say: ‘You’ve got to vote with us on this.’ He knows I’ll tell him to take a flyin’ leap,” she said. “I’m going to do what I think is right. It has nothing to do with the party.”

That is four Democrats threatening to break ranks.

If his fellow Democrats are threatening to break ranks, it is hard to imagine a scenario where Schumer finds enough Republican votes to block Brett Kavanaugh from becoming a Supreme Court Justice.