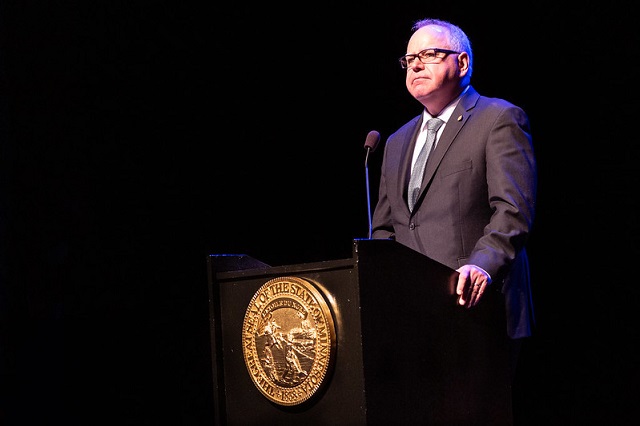 Democratic Minnesota Governor Tim Walz on Friday night appeared to try and shift the blame for the relentless riots in his city onto “white supremacists.”

“When asked by a reporter if Walz was aware of rumors that white supremacists had joined some of the looting he said, ‘My suspicious and what I’ve seen on this, yes,'” NBC News reported.

Somehow, @CNN will find a way to blame "white supremacists" for this. Just wait. https://t.co/GPcKNIUTdU

When you look at these protests you may see Black Lives Matter, antifa and liberal white women but when Gov Walz looks at them all he sees is “white supremacists.”

Check out these white supremacists trying to break into an ATM:

Looters try to break into a @WellsFargo ATM in Minneapolis. #antifa #BlackLivesMatter pic.twitter.com/ustOl5Gl2s

And here they are looting and ransacking an Office Depot:

Inside a ransacked Office Depot. pic.twitter.com/zpSlYQXgeQ

Don’t forget how they were filmed breaking into cash registers at Target!

These riots were the purest expression of white supremacy!

Mohamed Noor was MPD's first Somali cop who shot and killed a white woman who called police for help. pic.twitter.com/I2VxGOi56h

The Minneapolis 3rd Police Precinct was set on fire on Thursday night. pic.twitter.com/J6vjZKoCeQ

UPDATE: You just can’t make this s**t up!

They're actually running with this bull***t 😂 pic.twitter.com/vDmhTvLDXC

Trump's feeding into it to, blaming only "anfita" and the "radical left."

Remember, @RyanGirdusky reported yesterday WH decided to not to get involved in quashing the riots because "it would hurt their chances at coalition building w/ minority communities ahead of the election." pic.twitter.com/IQ4YEpW0Oe

.@MichelleMalkin predicted CNN would find a way to blame these riots on "white supremacists" yesterday.

It took less than 24 hours for her prediction to come true. pic.twitter.com/pnzTGIHlb1

We are now confronting white supremacists, members of organized crime, out of state instigators, and possibly even foreign actors to destroy and destabilize our city and our region.

Excuse me, sir, but these riots were all done by white supremacists! How dare you blame black people for the work of antifa and the radical left! pic.twitter.com/gCjazyE95g

With all due respect, sir, they may have that right but they did not exercise it!

The rioters were only White Supremacists, ANTIFA and the Radical Left! pic.twitter.com/oaSy9kNJU1

Violence as the "answer" *is* an unpopular opinion among the black and brown community.

That's why we know ONLY White Supremacists, ANTIFA and the RADICAL LEFT were rioting and burning things down!

Interesting to note just how quick the narrative has spun around the riots. Yesterday the riots were not only necessary for justice, but a legitimate use of violence. Now, the left are claiming that white supremacists are behind them, framing the black community. Which is it?