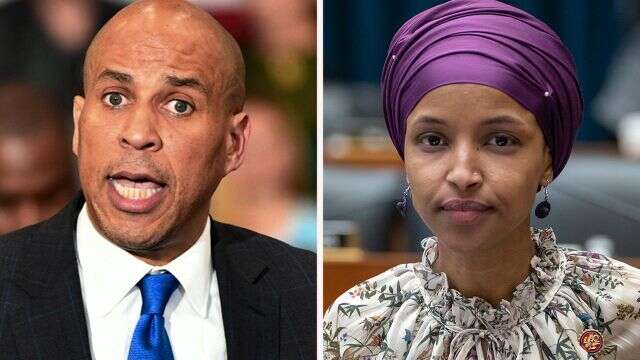 In light of the El Paso and Dayton shootings, some members of the left have begun calling for President Donald Trump’s future rallies to be cancelled. Why? Because his rallies allegedly incite the sort of extremism responsible for the two mass shootings.

The calls reportedly began with Democrat presidential candidate Sen. Cory Booker’s campaign, which has taken issue with Trump’s plans to hold a rally in New Hampshire next Thursday.

The following day, anti-Semitic Muslim Rep. Ilhan Omar posted a tweeted hinting at the same thing — that the president’s New Hampshire rally, as well as his other future rallies, should all be canceled because they allegedly incite extremism:

Counties that hosted a 2016 Trump rally saw a 226% increase in hate crimes.

To be clear, Omar’s assertion that “assaults increase when cities host Trump rallies” appears to be incorrect. How so? It’s based on a dubious study touted by The Washington Post.

The study by three left-wing graduate students of the University of North Texas claims that data from the Anti-Defamation League shows “that counties that had hosted a 2016 Trump campaign rally saw a 226 percent increase in reported hate crimes over comparable counties that did not host such a rally.”

However, the study seems to be biased. While the researchers admitted in a column for the Post that they “cannot be certain it was Trump’s campaign rally rhetoric that caused people to commit more hate crimes in the host county,” they also admitted that they don’t recognize the existence of hate crime hoaxes.

“[S]uggestions that this effect can be explained through a plethora of faux hate crimes are at best unrealistic,” they opined. “In fact, this charge is frequently used as a political tool to dismiss concerns about hate crimes. Research shows it is far more likely that hate crime statistics are considerably lower because of underreporting.”

But this is demonstrably false, which therefore calls into question their other conclusions:

However, the study seems to be biased. While the researchers admitted in a column for the Post that they “cannot be certain it was Trump’s campaign rally rhetoric that caused people to commit more hate crimes in the host county,” they also admitted that they don’t recognize the existence of hate crime hoaxes.

Poli-sci professor Wilfred Reilly has found more than 400 instances of hate crime hoaxes in America in his research. The epidemic we are experiencing isn’t in hate crimes but rather hate hoaxes. https://t.co/2BbSOJ3XOE #HateHoax

Conversely, the argument could be made that it’s the left that’s been inciting extremism and violence via its incessant hyperbole, misinformation and lies.

Meanwhile, one former member of the left-wing media called for the president’s supporters to be “exterminated,” a group of left-wing activists chanted death threats outside Senate Majority Leader Mitch McConnell’s home and a sitting Democrat member of Congress effectively doxxed the Trump donors who live in his district.

Then there’s Ilhan Omar, who, when not busy lobbing false accusations against the president or posting anti-Semitic tropes, can be found retweeting vile messages about how Republican Sen. Rand Paul deserved to be assaulted and have his ribs cracked.

What’s disconcerting is that this sort of rhetoric isn’t just being spouted by fringe elements of the left — it’s being touted by the mainstream left.

“The language of physical aggression is bellowed loud and clear from the political, cultural, journalistic, and academic classes of the Left,” political commentator Christopher Skeet noted in a column earlier this week.

“These aren’t vague, ambiguous slips of the tongue that can be explained away by context or poor phrasing. There is no dog-whistling here. These are direct calls to violence. And this violence is being encouraged not by fringe lunatics who show up at baseball games to shoot congress members, but … the ‘political class.’”

Speaking of fringe lunatics, one of the shootings — the Dayton one — was in fact committed by a virulently far-left activist who’d been influenced by the likes of Democrat presidential candidates Sens. Elizabeth Warren and Bernie Sanders. So should their rallies also be canceled?

If the answer is no, then why should Trump’s rallies be canceled, especially given as there’s no evidence to suggest that any mass shooting ever committed in the United States was influenced by him. Yes, it’s true that the El Paso shooter expressed great opposition to illegal immigration — an issue that the president admittedly campaigned on — but given that the majority of the population shares that view, this seems to prove absolutely nothing …