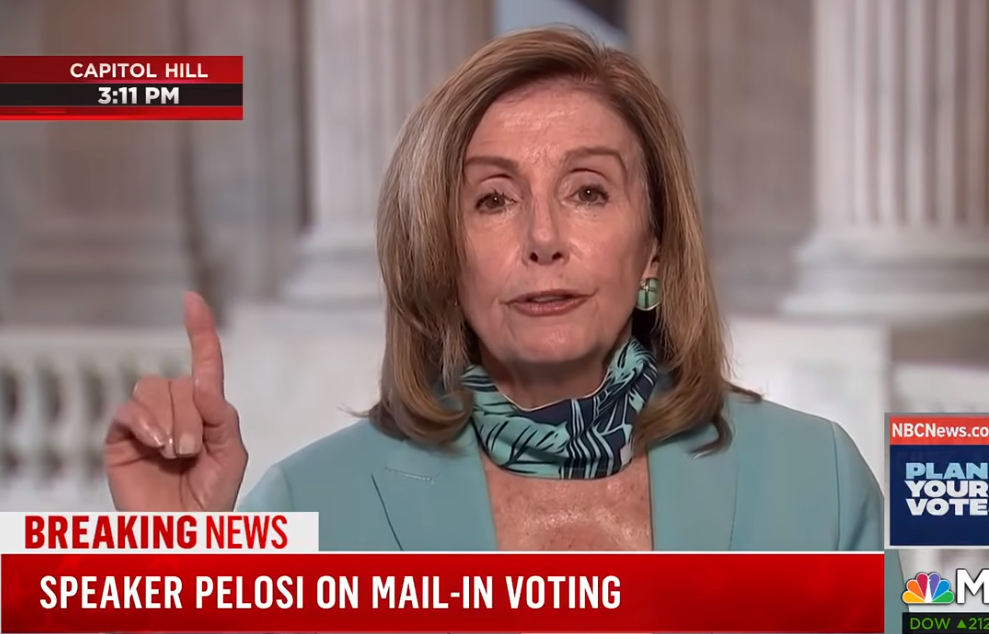 (Natural News) Democrats have essentially conceded the election as Speaker of the House Nancy Pelosi (Demon-Calif.) has just declared, “I don’t think there should be any debates,” absurdly claiming that Joe Biden debating with the President of the United States would “dignify” Donald Trump and therefore cannot be allowed to take place.

With this, the Democrats are now conceding the election to Trump, realizing that their brain-damaged candidate Joe Biden cannot form complete sentences except in offline, heavily-edited videos. Asking Joe Biden to debate in a live format would be like asking a house cat to use a typewriter… you’d end up with nothing but random garbage output.

.@SpeakerPelosi: “Don’t tell anybody I told you this.. Especially don’t tell Joe Biden. But I don’t think there should be any debates.” pic.twitter.com/Guu8Jkl1Gs

The Democrats are apparently convinced Joe Biden’s mental faculties are so weak, he can’t handle a single conversation with someone the Democrats claim is “unfit for office.” It raises the obvious question: If Joe Biden is too mentally weak to debate Trump, how is Biden supposed to lead America?

The Democrats already know they can’t win this election if it’s fair. They can only win by cheating, which is what Leftists do every minute of every day, by their very nature:

– The media cheats by demonizing all conservatives while burying all the negative dirt on Democrats (such as Bill Clinton’s connections with pedophile Epstein).

– Local voting districts cheat by mailing out a flurry of mail-in ballots so they can rig the results in cheat-by-mail schemes.

– In the 2016 debates, Hillary Clinton was given debate questions in advance by CNN, while Trump had no such privilege. (By the way, remember when the left-wing media went berserk when Trump said he would not concede defeat in advance? Now it’s Hillary who’s claiming Joe Biden should not concede defeat “under any circumstances,” even if he loses…)

Now, Democrats are cheating by trying to destroy the U.S. economy with forced, punitive coronavirus lockdowns, all while unleashing mass chaos in the streets of America through the use of “shock troops” (Antifa and BLM terrorists) who all support left-wing agendas. Even the pandemic lockdowns are a form of “cheating,” as the economy is deliberately sabotaged in an effort to try to hurt Trump.

Note that Democrats don’t care how many lives they destroy in the process, as long as they regain power. For them, it’s always about the power, no matter how many people have to be harmed in the process. Democrats will burn America to the ground if it allows them to seize the White House and regain political control.

The plan of the Democrats is “operation CHAOS” — cause so much chaos and confusion that the election results can be thrown into doubt all the way through January 20th. At this point, Nancy Pelosi will declare herself to be President, claiming the election outcome for Trump / Pence is uncertain. The complicit, treasonous media will go along with the ploy while an army of left-wing lawyers files endless legal claims as a delaying tactic.

Democrats have already explained they intend to call on the United States military to remove Trump by force if he refuses to concede the election (even if he wins). In fact, Nancy Pelosi said this herself when she recently called Trump and all Republicans “enemies of the state,” a claim that you’d expect to hear in the former Soviet Union, not a constitutional republic.

Earlier, on July 21st, Pelosi claimed Trump would be removed from the White House “whether he knows it yet or not.” (See these videos at this link.)

I explain all this in the following must-listen podcast:

Ultimately, the Democrats will lose and be disbanded

The reason the Democrats are now so desperate is because their election rigging won’t work this time. Trump already has this election in the bag, especially given the shocking lack of enthusiasm for Joe Biden, a candidate who quite literally remains locked in a basement, kept away from the public, all under the pathetic excuse of “covid-19.”

Not only will the Democrats lose this election; they will be exposed as the criminals they are. The DNC, we’ve learned from well-informed sources, will be disbanded after numerous Democrat crimes are exposed. (Not just money laundering and treason, but pedophilia and child trafficking, taking kickbacks from drug cartels, etc.)

I explain the forces behind all this in a second podcast, below, which reveals why Trump will win and Democrats will go down in flames:

Whatever the Democrats can’t control, they seek to destroy

But this doesn’t mean it’s going to be easy street for America. The Democrats will continue to try to burn down this nation and escalate their murderous attacks on innocent people across the country. They will unleash yet more BLM / Antifa “shock troops” to cause mass chaos, looting, arson and shootings on the streets of America.

The treasonous, complicit media will continue to claim that all left-wing terrorists are “mostly peaceful” while vilifying patriots who stand their ground and defend private property and innocent lives.

Big Tech will continue to censor all pro-America voices while allowing their own platforms to be openly used by left-wing terrorists to plan and carry out mass casualty attacks in America’s cities (watch for bombings to commence soon).

Democrats are doing everything in their power to turn America into a battleground of mass death and chaos, and they are doing that precisely because they know they cannot win the election.

And whatever Democrats cannot control, they seek to destroy.

This is their core value system. That’s why they are called DEMONrats, because they function as demons and rats. Even rats don’t murder their own babies and burn down their own nests. But Democrats do. They have less intelligence than street rats… and are probably less human than rats, come to think of it.

All who wish to preserve America will vote for President Trump in November. And he will win in an electoral landslide.

Follow more news on Trump and the elections at Trump.news.