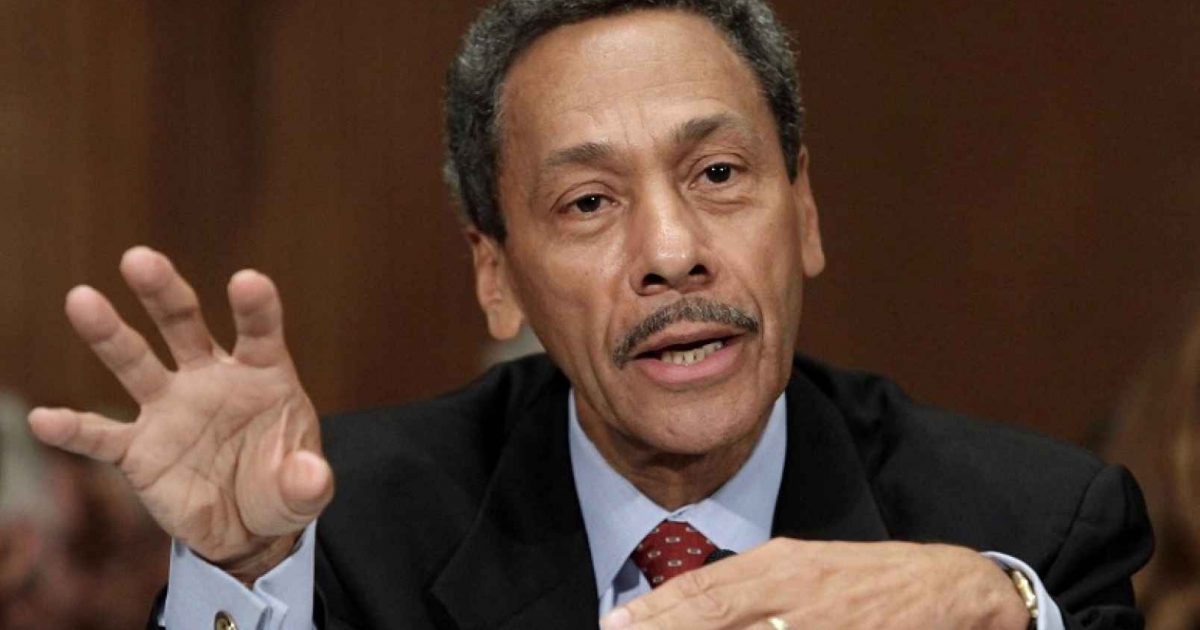 In the fall of 2013, the Democrats were outraged that Republicans were blocking Obama’s nomination of Rep. Mel Watt to head the Federal Housing Finance Agency. Watt was African-American and Senate Majority Leader Harry Reid and his minions repeatedly tried to associate the move with the Civil War.

“Republicans’ unprecedented obstruction continued today with a step that we have not seen since the Civil War, as they blocked Representative Mel Watt, a sitting member of the House of Representatives, from being confirmed to an administration position,” Reid ranted.

Senator Reid did not explain why House members should have special immunity from being filibustered or receive a special entitlement to administration positions, but everyone understood why. Watt wasn’t just anybody. He was already in Congress. He might be incompetent and unqualified. And inappropriate. But blocking unqualified and inappropriate members of Congress was unacceptable.

It hadn’t been done since the Civil War.

“I have known Mel Watt for 20 years. He is one of the smartest and finest members of Congress, an all-round good guy,” Norm Ornstein gushed in The Atlantic. “The rationale that Watt was not qualified for the position was flimsy at best.”

Republican opposition to Watt, a pol with “sterling credentials and moral character” was “outrageous.”

Watt’s credentials were anything but sterling. He was completely unqualified to head the FHFA. And his moral character was tattered by his war against the Office of Congressional Ethics. The OCE had investigated the Democrat when he had pulled a regulatory amendment two days after a DNC fundraiser for his “reelection” campaign pulled in donations from national finance industry firms.

Rep. Watt had routinely won his elections by 60 and 70 percent in a district he couldn’t lose.

Republicans were concerned that Watt would pursue risky mortgage policies that were popular with Obama’s base, but that had contributed to the recession. Watt already had donors from national financial firms like Bank of America and Goldman Sachs, and had been accused of being bought by them.

All of this made it a very bad idea to appoint him to one of the most powerful financial agencies in the country. But Watt was one of two Obama nominees who became the casus belli for Reid nuking the filibuster. If Republicans couldn’t back Watt, the argument went, the filibuster needed to go.

Reid pushed the nuclear button and Watt became the head the Federal Housing Finance Agency. And Watt repaid his Dem backers by announcing a “dramatic” shift to expand mortgages to unqualified borrowers proving that Senate Republican opposition to Watt had been based on facts, not fears.

The worst was yet to come.

Obama celebrated by declaring that Watt was “the right person to protect Americans”.

But who was going to protect Americans, especially FHFA employees, from Melvin Watt?

“If I Kissed That One, Would It Lead to More?”

Last year, Watt’s scandal breached the surface as he was serving out the end of his term. The former Democrat House member had been aggressively pursuing a woman at the agency he was running.

Watt took her to a Mexican restaurant and told her, “There is an attraction here that I think needs to be explored.”

“If I kissed that one, would it lead to more?” he asked of her tattoo.

When Simone Grimes turned him down, telling him that she was already in a relationship, he told her that wasn’t an issue.

“I love my wife too. Having an attraction for someone else doesn’t have to mean you don’t love them.”

But in private, Watt apparently insisted that he shouldn’t have to participate in an investigation because he didn’t see himself as an FHFA employee and was not bound by its employee policies.

Now the results are in.

“We find that there are no circumstances under which it would be appropriate for the head of FHFA to induce a subordinate female employee to meet with him alone, in his apartment, for a conversation in which he professes his attraction for that employee and holds out opportunities for the employee to serve in specific executive positions over which he exercises total control,” the inspector general’s report states.

The 600-page report accuses Watt of misconduct and of not being candid with investigators.

“The standards have become so confused that it’s difficult to operate in them,” Watt whined to them.

These were the standards that confused Watt so badly.

“So you have this conversation where you talk to her about the chief of staff position and other positions alone with her in your apartment with soft music in the background, and then tell her that she’s gorgeous, you’re attracted to her?” the investigator asked him.

The Democrat claimed that telling women they were gorgeous only meant a “friendship attraction” and that he had actually been trying to expose her attraction to him.

Nobody was buying it. Especially because Grimes had recordings of some of Watt’s conversations.

And now Watt is just another scandal in the rear-view mirror of the scandal-free Obama administration. But he occupies a unique place in history, as one of two Obama appointees who was used as a pretext for the nuclear option, but whose legacy is a reminder that some nominees should never be voted on.

A corrupt Democrat majority backed Watt and Americans, the FHFA and its employees paid the price.

The Right Man for the Job

His alleged victim, Simone Grimes, testified before the House Financial Services Committee that she had faced retaliation and harassment from FHFA Inspector General Laura Wertheimer.

And that Wertheimer had made her name public.

Wertheimer had started out clerking for Judge Spottswood Robinson, a Democrat hero, and was a partner at Wilmer Cutler Pickering Hale and Dorr, the most liberal firm on the list in an analysis of law firms. (Robert Mueller, leading the Clinton coup against Trump, was another Wilmer partner.)

And she was appointed by Obama.

Since then, Wertheimer has been under investigation for witness intimidation, allegedly done under pressure from Watt. Republican concerns were proven to be valid as risky loans were once again put on the table. Whistleblower complains alleged that the Obama appointee had slashed the FHFA’s auditors, forcing them out, and ruthlessly targeted whistleblowers reporting misconduct to investigators.

In the House, Watt had tried to cut the Office of Congressional Ethics’ budgets in retaliation for its investigation of him. Now he appeared to have been doing the same thing at FHFA. The FHFA paid out six figures in settlements while whistleblowers warned of Wertheimer’s culture of fear and intimidation. And that Watt was backing risky low down-payment mortgages that would backfire on taxpayers.

Senator Democrats had killed the filibuster to unleash a reign of corruption and terror at the FHFA.

The FHFA purge of its own auditors and the corruption of its internal watchdog are huge scandals, but they flew under the radar of a media reluctant to report damaging information about Democrats. The media insists that Obama ran a “scandal-free” administration and scandals get in the way of that myth.

But then Watt and Wertheimer became caught up in something more newsworthy when the FHFA leadership decided to abuse the agency in order to protect the sexual entitlements of its boss.

Senate Democrats had argued that Melvin Watt had a right to the FHFA position because he was a member of Congress. At the FHFA, he had the right to sexually exploit employees.

“Mel Watt is the right man for the job,” Senator Warren had insisted. “Congressman Watt has shown good judgment throughout it all.”

“I believe Mel Watt has the vision, experience and temperament necessary,” Rep. Maxine Waters had claimed at the time.

No difficult questions will be asked of Warren or Waters about why they ignored Watt’s red flags. And no one will revisit Reid’s decision to nuke the filibuster on behalf of an alleged sexual harasser.

But when we remember the downfall of the filibuster, we should not forget that it was nuked, with the eager cheers of the media and the political class who lectured us on Watt’s “sterling” character, to appoint a corrupt Democrat sexual harasser to one of the most powerful financial offices in the land.