Once again, Article 2, Section 3 of the US Constitution charges the president with making sure the laws are faithfully executed.

John Cardillo below says the Justice Department should be on the ground in Philly this morning.  I agree, but where are they actually?  It’s quite telling, don’t you think?

DOJ needs to be on the ground in Philly this morning. https://t.co/TMwuLClysE

Poll watchers are being forced outside at the Papa Recreation Center, where Biden pamphlets are being handed out at the door! pic.twitter.com/Ay0ihUSZQI

Election officials are preventing certified poll watchers from standing within earshot of the ballot count. What don’t they want them to hear?

Hey, @CouncilmemberKJ, we’ve already gotten four reports of certified Republican poll watchers being denied legal access to polling places in your ward. Is this the kind of stuff that got you indicted? #StopTheSteal @DA_LarryKrasner pic.twitter.com/TUS3Cai1sc

🚨DEMOCRAT ELECTION OFFICIALS BANNING TRUMP POLL WATCHERS IN PHILLY. This is happening all over the City. The steal is on! https://t.co/sWS9lXL5vh 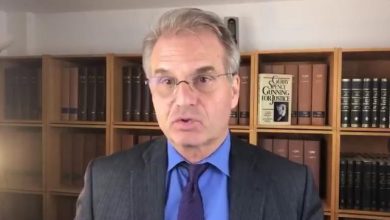 Dr. Reiner Fuellmich Heads Team Of 1,000 Attorneys & Over 10,000 Medical Experts In Legal Proceedings Against WHO & World Representatives For “Crimes Against Humanity”

The Left’s Plan to Subjugate Middle America: Placing Boots on the Ground
May 17th, 2021 TCP News
Powered by WordPress RSS Feed Plugin
PowerInbox 5×1
You Might Like