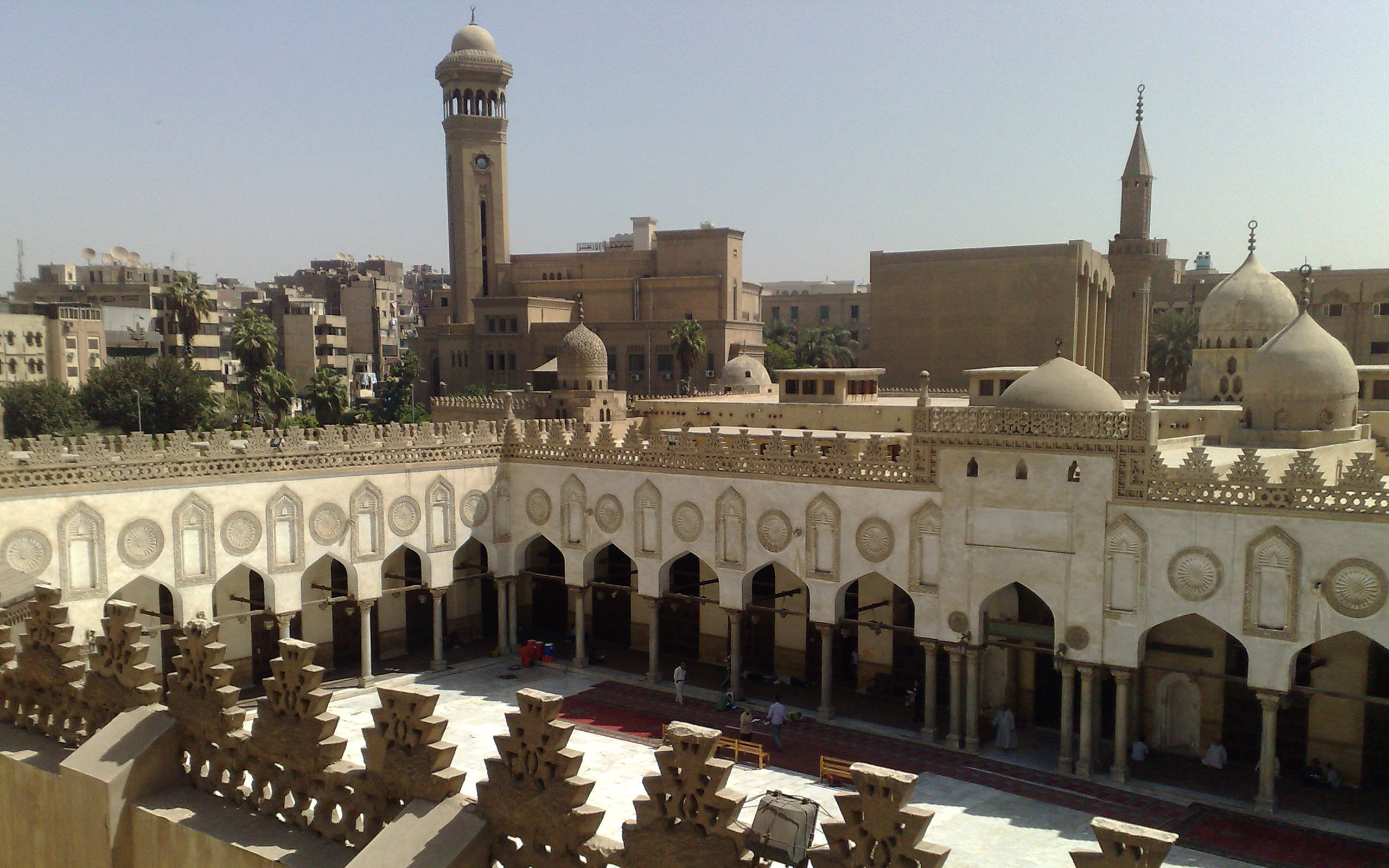 From the archives: April 12, 2015. Some links, videos or graphics may be broken, lost or removed.

Egypt Independent had this article exposing Al-Azhar University of Egypt:

“Religious jurisprudence textbooks for Al-Azhar students address, among other things, the issue of eating dead human beings, quoting Mansour bin Yunus al-Bahuti, a scholar of the Hanbali school of jurisprudence who died 500 years ago, as saying that eating dead Jews, Christians and non-believers is halal (permissible by Islam) if it is a necessity, but non-Muslims are not to eat dead Muslims, even out of necessity.

Another textbook quotes Imam al-Sherbini of the Shafi school of jurisprudence as saying that dead prophets of any religion should not be eaten. And when he was told that prophets do not die and that they lie alive praying in their graves according to the Hadith, he said that he meant if they were found dead before they were buried.

He also clarified that the meat of dead Jews, Christians and infidels should be eaten raw, not cooked or grilled.

Other Al-Azhar textbooks say that eating dead Jews, Christians and non-believers can be allowed not only out of necessity, but also as a punishment for heresy.

In the book “Persuasion in Resolving the Words of Abi Shoga” that takes after the Shafi school of jurisprudence, the author says a Muslim warrior may kill and eat infidel men, women and children if they were not warriors themselves.

The chapter about food in the Hanbali book “Al-Rawd Al-Moraba Fi Sharh Zad Al-Mustaqni” for the secondary Al-Azhar schools says the Prophet allowed the eating of a hyena and a horse, which the Hanafi and Maliki schools of jurisprudence disagreed with.

The author also allowed the eating of peacocks, parrots, crows, locusts and water creatures, except frogs, crocodiles and eels. Whales may be eaten, he said, except their liver and their spleen. He also forbade the eating or grilling of live fish.

In the chapter about what is permissible to eat, the book “Al-Sharh al Saghir” for Ahmed Dardir, which explains the Maliki school of jurisprudence, says it is not permissible to eat wild game hunted by a Muslim and an infidel together, or anything slaughtered by a Christian or a Jew.

The book permits eating a giraffe and forbids eating pork. It says a Muslim may eat a dead human being out of necessity, but not eat pork or wild game that was hunted by a non-believer.”

And if some find this difficult to believe, Shoebat.com has exposed Islam and Cannibalism since 2013 and 2009.

In an interview, one Egyptian scholar exposed the high school curriculum coming from Al-Azhar University, the most reputable of all Islamic schools, showing that it condoned cannibalizing non-Muslims:

We allowed the eating of the flesh of dead humans… under necessary conditions. It [dead human flesh] must not be cooked or grilled to avoid Haram (wrongdoing) …and he can kill a murtadd (apostate) and eat him.

The book that is being taught to general high-school students mentions that those who don’t pray can be grilled & then eaten.

Al-Azhar finds their support for cannibalism in Islamic authority. According to Al-Shafie, who is considered to be the founder of Islamic jurisprudence:

One may eat the flesh of a human body. It is not allowed to kill a Muslim nor a free non-Muslim under Muslim rule (because he is useful for the society), nor a prisoner because he belongs to other Muslims. But you may kill an enemy fighter or an adulterer and eat his body (716 in volume 1, Al-Kortoby)

And where did Obama give his 2009 speech in Egypt, which empowered the Muslim Brotherhood? Al-Azhar.

As we write in our book, For God or For Tyranny, Muhammad and his minions conducted themselves in the voodoo-like act of blood drinking in which,

Malik ibn Sinan drank his [Muhammad’s] blood on the Day of Uhud and licked it up. The Prophet allowed him to do that and then said, “The [Hell] fire will not touch you.” …and “Abdullah ibn az Zubayr drank his cupped blood. The Prophet said, “Woe to you from the people and woe to the people from you.” But he did not object to what he had done.

Abu Saad Khodri who stated in a strong Hadith in Sharh Hayat al-Sahaba, regarding partaking in the blood of Mohammed:

When, at the battle of Uhud, the helmet-rings had been taken out of the Prophet’s cheek, blood flowed from the radiant face of that Lord of the pure, and my father Malik Ibn Sinan sucked the wounds with his mouth, swallowing the blood. When they said to my father, “Malik, is blood to be drunk?” my father replied, “Yes, the blood of the Prophet of God I drink like a beverage.” At that time his Excellency, the Prophet, said, “Whoever wishes to see one who has mixed my blood with his own, let him look at Malik Ibn Sinan: any one whose blood touches mine, him the fire of hell shall not desire.”

Bizarre and psychotic narrations like this are too many to quote. They speak of drinking Mohammed’s urine and eating his excrement. Christians would ask, “Would such abominations be chosen over the precious blood of the sinless Lamb of God?” No Bible believer drinks literal blood.

The Egyptian scholar also added that the support for cannibalism from Al-Azhar will give the justification for “the establishment of committees for Promotion of Virtue & Prevention of Vice that’ll carry out this stuff [i.e. cannibalism]

In Egypt there is an Islamic mafia called Promotion of Virtue and Prevention of Vice Authority, which is the exact name of the moral police in Saudi Arabia. They roam the streets assaulting, or even killing, those whom they speculate to be apostates. In November of 2012, a number of these mobsters entered the shop of Ahmed Gharib to use the bathroom, and when the owner told them that they had to ask for permission before using the restroom, they responded with: “we do not ask for permission”.

A few minutes later thirty bearded men entered the shop to “discipline him for insulting a religious figure,” and attempted to cut off Gharib’s hand, but he escaped with deep wounds. Gharib’s brother, angered by what they had done, insulted the mob, and so he was then seized and ordered to have his tongue severed off. But he too fled.

Egypt’s new constitution already establishes that the nation will be having a Saudi style Sharia police which will be implementing not only this sort of violence, but the eating of human flesh. Morsi’s coming ‘moral’ mafia and mere Egyptian individuals will be given the power to partake in such barbarism.

In fact, the constitution also mandates that any Islamic edict coming from the government must first go through Al-Azhar university scholars. This means that the okay for cannibalism will be observed in Egypt.

I wrote an article on how Egyptian society is becoming more and more savage, and how the Egyptian people are becoming like zombies. I wrote on how a butcher in Egypt killed his wife, flayed her flesh off the bone, and put it for sale as lamb in his market.

Now with Al-Azhar’s blessing, we are going to be seeing more of this type of violence. But why is this happening? While many people see Islam as a morally conservative religion, akin to Christianity and Judaism, they don’t understand that Islam is Satanic, and of no different spirit than any other pagan religion.

Egypt is merely going back to its heathen roots. In Ancient Egypt human sacrifice was followed by ritual cannibalism. On the temple of Edifu, all lands foreign to Egypt are pictured as being under the feet of the pharaoh, as four men, their arms bounded, are about to be ritually sacrificed. As the sacrificial victims are awaiting their deaths, a person hovers over them, reciting the “Book of the Subduing of the Nobility”. This rite was a part of an annual fertility ritual, the depictions of which have netted birds, fish, and mortals, as representing the enemies of the pharaoh–Asiatics, Beduin, Nubians, and others–which were to be eaten for “breakfast, lunch, and supper.” By consuming the flesh of their enemies, the Egyptians believed that they would absorb their desired qualities. (1)

Cannibalism continued on in Egypt even after the Christian Era, and regardless of Islam prevailing over the country, it was still prevalently practiced. In 1148, as Rudwan, a criminal, was fleeing for his freedom from the authorities, he was slain in front of the palace of the Khalifa. His head was cut off, and his body mutilated into little pieces only for them to be eaten by Egyptian soldiers in their infernal belief that they would absorb the courage of the victim. (2)

Cannibalism was practiced throughout the ancient Near East. In the Christian era the heathens of pre-Islamic Lebanon seized Cyril, a deacon of Heliopolis who despised heathenism, killed him, teared open his stomach and ate his liver. (3) These pagans did this because Cyril was Christian, and so will we see this being done by the Muslims toward the Copts.

And if one thinks that the Muslim have evolved into a modern mindset, one must remember what took place in Ramallah in which two Israeli soldiers were beaten and tortured to death, their bodies thrown down a window to the sounds of “Allahu Akbar”, and their flesh then chewed by the crowd.

Muslims in Ramallah held body parts of Israelis while they cried out “I eat the flesh of my occupier!”

The spirit of cannibalism is alive and well in Egypt. Just look at what the Egyptian cleric Muhammad Hussein Ya’qub said in this video:

This savagery will be taking place in Egypt, but his time at a much wider scale.

Walid and Theodore Shoebat are the authors of the book, For God or For Tyranny.

*Theodore Shoebat contributed to this article

Walid Shoebat is a former member of the Muslim Brotherhood who was converted to Christianity, and author of the book, God’s War on Terror.