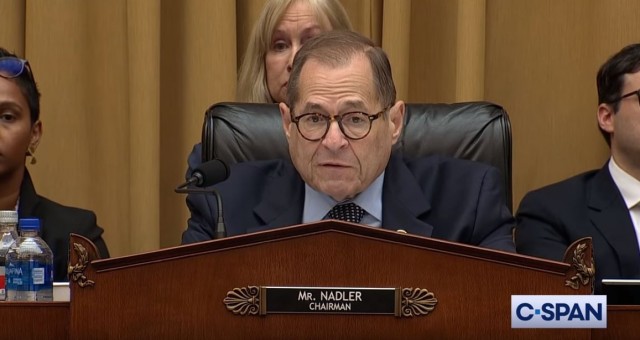 Editorial Opinion:E Pat – It’s anyone’s guess what House Judiciary Chairman Jerrold Nadler was thinking when he decided to go all in on impeachment while holding a losing hand.

Still, Nadler forged ahead with a fifth inquiry and, after Cory Lewandowski’s testimony yesterday, he has to be sorry that he did.

Lewandowski absolutely owned Rep. Sheila Jackson Lee who tried to make a case for obstruction from the fact that President Trump asked Lewandowski to deliver a message to his attorney general.  The message was never delivered.

Jackson Lee kept badgering Lewandowski over this non-issue as though this was the smoking gun that the four previous investigations failed to uncover – not that they hadn’t discarded it as a nothing burger, which they did.

When she finally ran out of time, and was forced to stop providing her own testimony and from badgering Lewandowski was asked if he wanted to answer her.

He calmly responded: “I don’t believe there was a question, congressman.  Could you repeat the question? I didn’t hear it. It was just a rant.”

It went on like this all day with Democrats asking questions that, even if they got the answers they were looking for, would not even sway public opinion against the president let alone rise to some level of impeachment.

The entire 3-plus hours exposed the Democrats as little more than a clown show.  Rather than waste that time here’s an 11-minute compilation courtesy of the Daily Caller.  You’ll find it difficult to not laugh out loud:

This article originally appeared at ILLICIT INFO and was republished with permission.