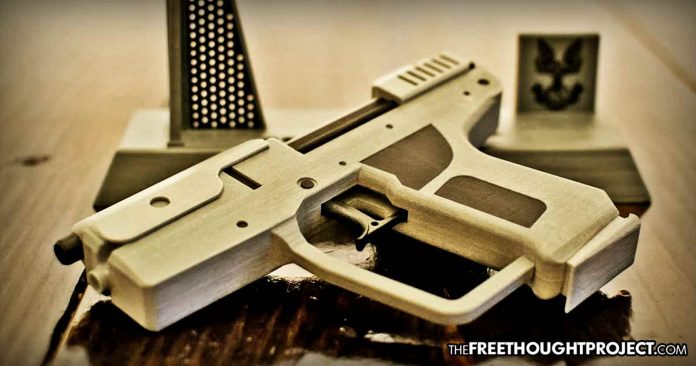 Washington, D.C. – The U.S. Department of Justice reached a landmark settlement with the Second Amendment Foundation and Defense Distributed; an organization that promotes and distributes technologies to manufacture firearms at home with a 3D printer.

The two organizations initially filed suit against the U.S. government in 2015, after the feds alleged that Defense Distributed was violating munitions export rules contained within the International Traffic in Arms Regulations (ITAR) and ordered the company to cease distribution of gun-making files.

The government essentially claimed that by releasing a digital file of technical specifications for a do-it-yourself gun, the company was now an illegal arms dealer.

The company claimed in its lawsuit that the feds ordering them to cease distribution amounted to “censorship of Plaintiffs’ speech,” due to computer files consisting of code—which falls under the umbrella of free expression.

Additionally, the suit asserted that “the ad hoc, informal and arbitrary manner in which that scheme is applied, violate the First, Second, and Fifth Amendments.”

Under the terms of the agreement, Americans are acknowledged to have a right to “access, discuss, use, reproduce or otherwise benefit from the technical data” produced and distributed by Defense Distributed.

The saga began when a proprietor of Defense Distributed, Cody Wilson, published a 53-second video in May 2013 in which he fires a strange plastic looking gun.

hat video, which documented the first time a plastic gun manufactured by a 3D printer was successfully fired by a human hand, was watched 3 million times the week after it was released. The ghostly weapon, made entirely of acrylonitrile butadiene styrene thermoplastic polymer (except for a small metal nail used to strike the primer on the .380 caliber bullet) was crafted by a moving machine head on a Stratasys Dimension SST 3D printer, depositing resin in layers in accordance with computer instructions, the same way an inkjet printer churns out two-dimensional documents.

To make this gun, you don’t need to be a gunsmith or have access to a large industrial operation. It would be very easy to make the gun without having to notify the state in any way. Designing, printing, and firing the gun could have been done in the shadows had the shooter not documented it on video and invited reporters from Forbes and the BBC to watch.

Wilson makes no secret that the intention behind distributing CAD files to create homemade guns is to make gun control measure obsolete and bolster the Second Amendment, which is under continual assault from anti-gun activists.

“We put a lot of world governments on notice, and I think that’s good in the history of the balance of power between sovereigns and subjects,” Wilson told the Brown Political Review.

In response to the settlement, the Second Amendment Foundation issued a press release that explained:

Significantly, the government expressly acknowledges that non-automatic firearms up to .50-caliber—including modern semi-auto sporting rifles such as the popular AR-15 and similar firearms—are not inherently military.

“Not only is this a First Amendment victory for free speech, it also is a devastating blow to the gun prohibition lobby,” noted SAF founder and Executive Vice President Alan M. Gottlieb. “For years, anti-gunners have contended that modern semi-automatic sport-utility rifles are so-called ‘weapons of war,’ and with this settlement, the government has acknowledged they are nothing of the sort.

“Under this settlement,” he continued, “the government will draft and pursue regulatory amendments that eliminate ITAR control over the technical information at the center of this case. They will transfer export jurisdiction to the Commerce Department, which does not impose prior restraint on public speech. That will allow Defense Distributed and SAF to publish information about 3-D technology.”

In exchange for the plaintiffs’ agreeing to drop the lawsuit, the feds say they will officially announce the removal of the previous restrictions by July 27 on the website of the Director of Defense Trade Controls.

With ever-present governmental encroachment on individual gun rights, this settlement represents a major victory for proponents of a strong Second Amendment and an individual citizen’s right to bear arms.