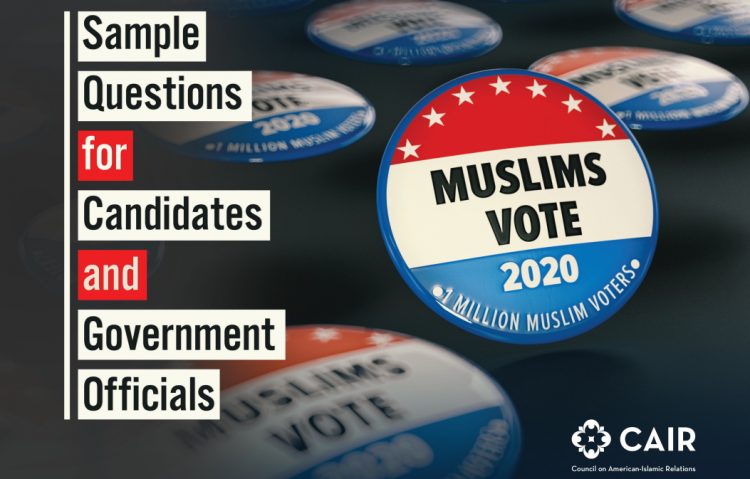 Designated Islamic terror group Council on American-Islamic Relations (CAIR) has announced that it is launching its 2020 “Muslims Vote” campaign that seeks to empower antichrist Muslims in America by “increasing their political capacity and presence in the 2020 General Election.”

So, how are they kicking things off?

First of all, they have provided a “Sample Questions for Candidates and Government Officials” toolkit.

Notice, that they do not correctly refer to our representatives as representatives nor senators nor a president, but “government officials.” Keep that in mind because not only does CAIR represent antichrist Islam, but they also represent Islamic Sharia as well.

Does the questionaire ask any relevant constitutional stances of these people who are asking for their vote? Not really.

Instead, they ask the following:

The final few questions beginning at the Trust Act, except for those about voter discrimination, which is not discrimination at all, and the right to boycott countries if one desires to do so are the only things I see in there that appear to be a serious consideration of unconstitutionality. However, the First Amendment, contrary to popular opinion, was never designed to protect the public practice of Islam in the US.

And keep in mind how Muslims have been gaining political traction in the US in the past couple of years.

The majority of these questions have nothing to do with constitutionality but are questions about things not authorized to the central government in the Constitution.

While can have respect for different cultures, and frankly we should have respect for each other, as those made in the image of God, no one should be forced to respect an antichrist religion, especially when that religion flies right in the face of the Christian religion, which is the very foundation of this land! You see, CAIR is attempting to poison the well by claiming to be the victims as Muslims, while at the same time, their very book, non-prophet and hadiths call Christians “infidels” and fail to admit that God came in the flesh as Jesus the Christ. Those who deny that are antichrists.

So, who would be disrespectful here? If one wants Islam, there are plenty of countries that embrace those doctrines of demons and already in place, but that’s not what they want.

Christians should want dominion, even as God commanded us, but not domination of men. Rather take dominion over the earth.

For instance, the questions regarding education should be immediately dismissed. Our Constitution gives zero authority to the central government to put its nose in education though it has been doing it for quite some time and the Trump administration continues right along with the globalist, United Nations agenda when it comes to education despite the claims of America First.

The travel ban was perfectly within the authority of the president to do considering it was a clear defensive measure. Additionally, CAIR raises a stink about refugee resettlement when it’s clear that plenty of Muslims have resettled here despite the wishes of many Americans, and that recently it was reported that 18 Republican governors had requested even more Muslim refugees in their states as “Christian charity.”

Keep this in mind as we head into 2020. Just like the broken promises of President Donald Trump that our Second Amendment-protected rights are no longer under attack, the Muslim issue has not gone away. It has grown, and some of it at President Trump and Congress’ own hand.

When is America going to deal with CAIR and other Muslim Brotherhood front groups in our country?