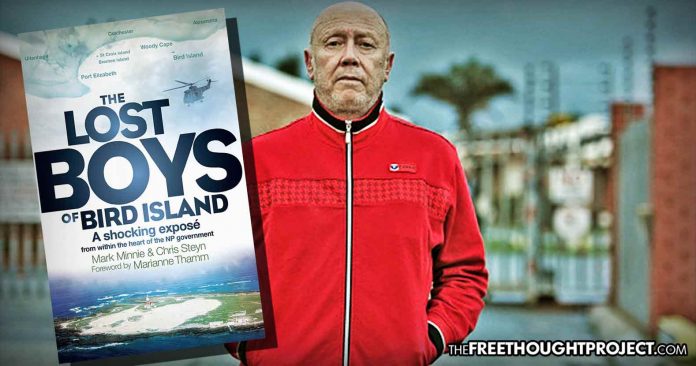 A former police detective, and author of a bombshell book that exposed a massive pedophile ring made up of high-level government officials was found shot in the head last week. While officials are calling it an apparent suicide, his family is claiming that he told them he would never kill himself and that people were after him because he was about to expose even more high-level government pedophilia.

Mark Minne, author of the controversial book ‘The Lost Boys of Bird Island’ devoted his post-police life to exposing the corruption and horrifying pedophilia he discovered while working as a detective. Minnie and his good friend Chris Steyn, also a former cop turned investigative journalist, worked together on the book to expose a government and business community who took children to Bird Island where they were abused, and some possibly murdered.

The book details the level of their involvement in the pedophile ring, abuse of the children, alleged acts of murder to cover up the crimes, as well as corruption and abuse of high-level state resources by the network’s members.

The book details the corruption within the last Apartheid government of South Africa and implicated officials all the way to the top, including defense minister Magnus Malan and the minister of environmental affairs John Wiley.

Before his death, Minnie announced that he was approached by many more people with even more damning evidence which he planned to reveal in a sequel of the book. However, he died before he could finish it.

The book was published earlier this month on August 5 and only nine days later, Minnie would be found dead. Officials claim they found a suicide note at the scene, but his family says they don’t believe it at all.

Tersia Dodo, a family member of Minnie told reporters that just days before he died that if anything happened to him, they must know he was killed.

“He mentioned to us all the time that his life was in danger and if anything did happen to him we must know that it was done to him not by himself,” she said.

Dodo says Minnie was being watched and feared for his life because he had more information which would’ve exposed even more people.

“I knew about the book for many years and I knew what he had been through, it really played him that he had seen and been involved with the investigation surrounding the book,” Dodo told SABC.

Dodo came forward on her own after she saw the suicide narrative being played out in the media. She said she was compelled to do so, to dispel the myths.

“Mark was not a coward, Mark faced life head on,” she said. There is no ways that I or any of us believed that he would have opted out and that is why I agreed to do this interview to dispel any thoughts and rumors of suicide. He was not the type of man that was cowardly and that would do something like that.”

As for the note police allegedly found next to Minnie’s body, Dodo believes it is either fake, or was written under duress.

“I have said this from the beginning, this supposed suicide note was either written under duress and I would like to see it before I will believe it was written by Mark,” she said.

This case is eerily similar to that of a man who was allegedly murdered in Lithuania after he began exposing high-level government pedophiles.

As TFTP previously reported, teenage refugee from Lithuania came forward last year with a White House petition and a damning testimony showing what happened after his family tried to expose a little girl’s abusers.

When his four-year-old cousin accused two high-level government officials—describing it in heartbreaking detail—Korolis Venckienė learned the hard way how the government protects its vilest members, up to and including using hundreds of militarized police and even murder.

As Venckienė explained in his petition on WhiteHouse.gov, this nightmare started when their family attempted to seek justice for the sick men who allegedly raped his four-year-old cousin.

“In 2008, 4-year-old Deimante Kedyte described her sexual assault by high-level Lithuanian officials. Her testimony was later verified as true by 4 separate commissions. She never had her day in court,” Venckienė wrote.

When the teen’s uncle, Drasius Kedys, Deimante’s father pushed for the men to be prosecuted for what they did to his daughter, he was murdered.

If Minnie was actually murdered, hopefully the information he was planning on releasing still comes forward. The only way to stop these vile actors is to shine light into the darkness. While Minnie has been silenced, his work can live on to be that light.