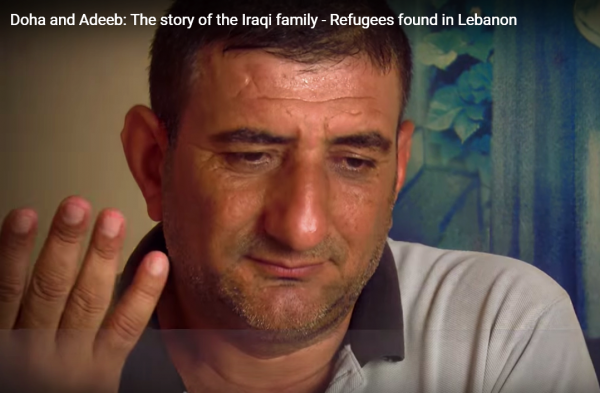 From the archives. Originally published October 8, 2015.

The below 6-minute video is a must-see. It offers an up close and personal account of what Christian minorities are experiencing at the hands of jihadis and other Muslim “rebels” being supported in the Mideast by the Obama administration.

A Christian family from Iraq narrates how their young children were killed and burned alive, “simply for wearing the cross.” One of the remaining and traumatized children uses toy figures to show people how his siblings were slaughtered.

This family is identical to the other Christian refugees who fled the Islamic State in Iraq and came to America—only to be imprisoned and then thrown back to the lions by the Obama government.

Listen especially to the mother’s words starting around the 2:50 minute mark. She talks about how the “ISIS” that attacked and killed her children were their own Muslim neighbors, whom they ate with, laughed with, and even provided educational and medical service to.

For more on this theme, read When Muslims Betray Non-Muslim Friends and Neighbors.

Raymond Ibrahim is a Middle East and Islam specialist and author of Crucified Again: Exposing Islam’s New War on Christians (2013) and The Al Qaeda Reader (2007). His writings have appeared in a variety of media, including the Los Angeles Times, Washington Times, Jane’s Islamic Affairs Analyst, Middle East Quarterly, World Almanac of Islamism, and Chronicle of Higher Education; he has appeared on MSNBC, Fox News, C-SPAN, PBS, Reuters, Al-Jazeera, NPR, Blaze TV, and CBN. Ibrahim regularly speaks publicly, briefs governmental agencies, provides expert testimony for Islam-related lawsuits, and testifies before Congress. He is a Shillman Fellow, David Horowitz Freedom Center; a CBN News contributor; a Media Fellow, Hoover Institution (2013); and a Judith Friedman Rosen Writing Fellow, Middle East Forum . Ibrahim’s dual-background — born and raised in the U.S. by Coptic Egyptian parents born and raised in the Middle East — has provided him with unique advantages, from equal fluency in English and Arabic, to an equal understanding of the Western and Middle Eastern mindsets, positioning him to explain the latter to the for