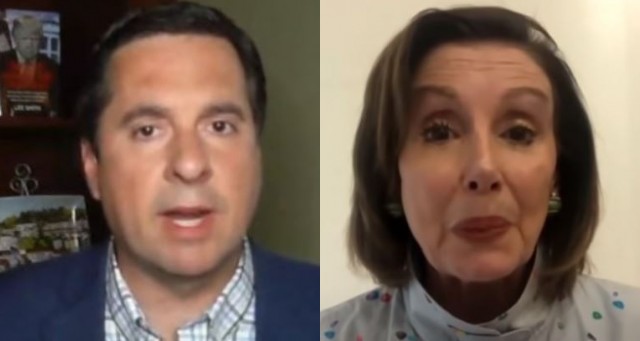 Pelosi joined comedian James Corden on his late-night show last week, showing the camera more than a dozen containers of ice cream in her freezer, most of which cost $12 or more.

“I don’t know what I would’ve done if ice cream were not invented,” the California Democrat said in the interview.

We all have found our ways to keep our spirits up during these trying times. Mine just happens to fill up my freezer. #LateLateShow pic.twitter.com/dqA32d5lU1

Nunes, a Republican, joined Fox & Friends Weekend on Sunday and blasted the Speaker’s appearance, which seemed out of touch to him.

“If any Republican leader, if [Senate Majority Leader] Mitch McConnell or [House Minority Leader] Kevin McCarthy or any of our speakers in the past would have said — done something like Pelosi did, where she’s sitting at home in front of her refrigerator with a, you know, $24,000, you know, freezer that I don’t think too many of us have … it would be a fatal flaw,” Nunes said.

“We would boot McConnell or McCarthy out of leadership just like that. They would have been out four days ago, the minute that that popped up,” he added.

“When you have … 20 million people unemployed — you have people that can’t get paychecks. … What the hell is going on?” he continued.

“And you know, she’s sitting in San Francisco eating gourmet ice cream? It doesn’t fly out in the real world.”

This article originally appeared at USA Features News and was republished with permission.