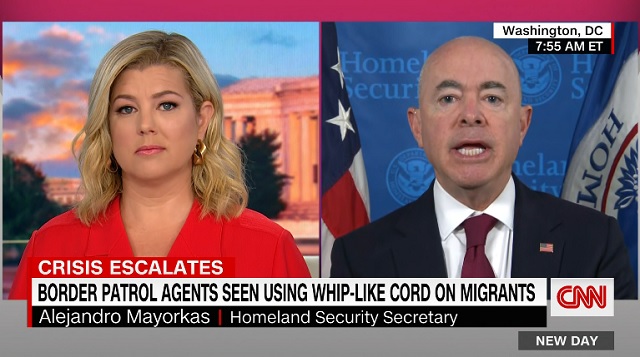 Homeland Security secretary Alejandro Mayorkas said Tuesday that he is “horrified” by images showing US Border Patrol agents attempting to protect our southern border — which he insists is “closed.”

“I was horrified by what I saw,” Mayorkas told CNN’s Brianna Keilar on “New Day.” “I’m going to let the investigation run its course. But the pictures that I observed troubled me profoundly. That defies all of the values that we seek to instill in our people.”

“Any mistreatment or abuse of a migrant is unacceptable, is against Border Patrol policy, training, and our department’s values,” Mayorkas said.

Mayorkas would have preferred if those border patrol agents were working undercover at the “Justice For J6” rally spying on Americans rather than trying to protect us from the invasion at our border (which the Biden regime tried to keep Americans from even seeing by banning drones from the area)!

Mayorkas insists the border is “closed” even though he personally threw it wide open immediately after taking office in the name of fighting white supremacy (which he says is America’s number one threat):

The invasion happening at the border doesn’t “horrify” him — border patrol agents doing their jobs and trying to defend our border does!