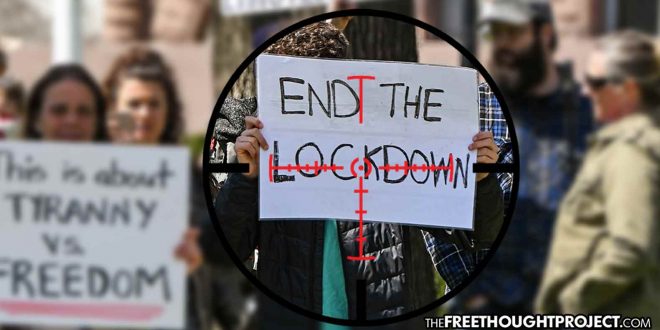 Despite Joe Biden running on a platform of unity to bring Americans back together, before he was even sworn in, he reneged on this promise by alienating tens of millions of Trump supporters — essentially declaring them the enemy.

“Don’t dare call them protesters,” Biden said after the largely peaceful march on DC which ended with a few hundred goons out of tens of thousands of peaceful protesters raiding the capitol. “They were a riotous mob. Insurrectionists. Domestic terrorists. It’s that basic. It’s that simple.”

While some of the folks certainly thought they were part of some coup, the reality of the situation was nothing at all as serious as the media and establishment is claiming.

Just like Trump used Antifa violence to bolster the police state and add stricter penalties for protests, Biden is using the riot at the capitol to do the same. We predicted this outcome last month, and now it is escalating even further.

Using The DHS National Terrorist Advisory System — or NTAS — the Department of Homeland Security has issued a warning that anger “fueled by false narratives,” including unfounded claims about the 2020 presidential election, could lead some inside the country to launch attacks in the coming weeks.

This threat bulletin is worrisome as it is all encompassing and covers a range of issues and beliefs held by tens of millions of Americans.

Closing out the bulletin, DHS urged Americans to report any “suspicious activity and threats of violence, including online activity, to local law enforcement, FBI Field Offices, or their local Fusion Center.”

This move comes on the heels of a a bipartisan group of police state-pushing bureaucrats in Congress who have introduced the so-called “Domestic Terrorism Prevention Act Of 2021.”

“America must be vigilant to combat those radicalized to violence, and the Domestic Terrorism Prevention Act gives our government the tools to identify, monitor and thwart their illegal activities,” Congressman Brad Schneider, one of the bill’s lead sponsors, said. “Combatting the threat of domestic terrorism and white supremacy is not a Democratic or Republican issue, not left versus right or urban versus rural. Domestic Terrorism is an American issue, a serious threat that we can and must address together.”

The police state advocates and war hawks have likely been salivating over this push for a long time waiting for their perceived crisis to strike and Trump playing pied piper to his base was the perfect catalyst. When CIA war hawk John Brennan takes to national news to declare “libertarians” to terrorists, we should all be on high alert.

Luckily, those who see the bill for what it really is are speaking out against it.

Did I just hear @JohnBrennan compare libertarians to racists, bigots, fascists, authoritarians and religious extremists? Yes, yes I did. Thank you Tulsi for standing up to this. https://t.co/62AfBTKqj7

“We don’t have to guess about where this goes or where it ends,” Gabbard argues, “When you have people like former CIA Director John Brennan openly talking about how he’s spoken with appointees and nominees in the Biden administration who are already starting to look across our country for these types of movements… that in his words make up this ‘unholy alliance’ of ‘religious extremists,’ ‘racists,’ ‘bigots’ … even ‘libertarians.’”

As former Congressman Justin Amash points out, there are already countless laws on the books to prevent and punish criminal activity. Moves like this are not designed to protect Americans from crime, they are designed to usurp rights and give the world’s largest police and surveillance state a steroid shot to the arm.

“There are no serious offenses that aren’t already discoverable and punishable under existing laws. When officials say they need a new security law, what they really mean is they want new powers to surveil without a warrant or to impose severe penalties without as much evidence,” former Congressman Justin Amash said, and he is right.