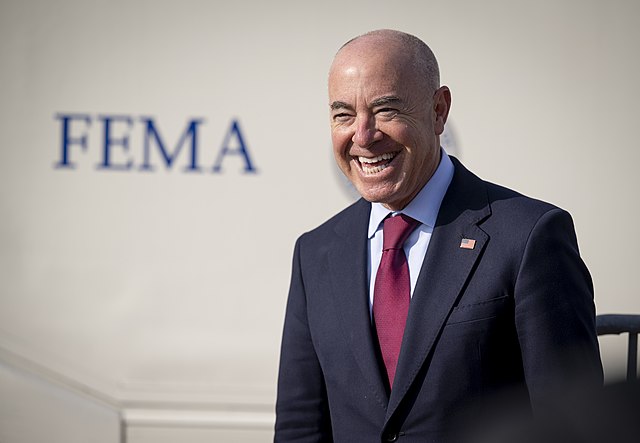 Homeland Security secretary Alejandro Mayorkas is no longer going to “deport people solely because they are undocumented” and is advising ICE to consider shielding mentally ill criminals from deportation in the name of “achieving justice.”

CNBC on Thursday ran an article titled: “U.S. will no longer deport people solely because they are undocumented, Homeland Security secretary says.”

“Homeland Security Secretary Alejandro Mayorkas on Thursday said immigration officers can no longer detain and deport people from the U.S. solely because they are undocumented,” CNBC reported.

“The fact an individual is a removable noncitizen will not alone be the basis of an enforcement action against them,” Mayorkas’ new guidelines state.

None of the thousands of illegal aliens he’s allowing to march into our country every single day are “undocumented.”

They are fully documented, they just throw their documents in the garbage before crossing because they know that means Mayorkas will give them special treatment and allow them to stay.

Mayorkas announced his new policy in a statement on DHS.gov:

WASHINGTON – Today, Secretary of Homeland Security Alejandro N. Mayorkas announced new Guidelines for the Enforcement of Civil Immigration Law to better focus the Department’s resources on the apprehension and removal of noncitizens who are a threat to our national security, public safety, and border security and advance the interests of justice by ensuring a case-by-case assessment of whether an individual poses a threat. […]

“For the first time, our guidelines will, in the pursuit of public safety, require an assessment of the individual and take into account the totality of the facts and circumstances,” said Secretary Mayorkas. “In exercising this discretion, we are guided by the knowledge that there are individuals in our country who have been here for generations and contributed to our country’s well-being, including those who have been on the frontline in the battle against COVID, lead congregations of faith, and teach our children. As we strive to provide them with a path to status, we will not work in conflict by spending resources seeking to remove those who do not pose a threat and, in fact, make our Nation stronger.”

Enforcement priorities for apprehension and removal remain focused on noncitizens who are a threat to our national security, public safety, and border security. But the guidelines are a break from a categorical approach to enforcement. They require an assessment of the individual and the totality of the facts and circumstances to ensure resources are focused most effectively on those who pose a threat.

There is also recognition that the majority of the more than 11 million undocumented or otherwise removable noncitizens in the United States have been contributing members of our communities across the country for years. The fact an individual is a removable noncitizen will not alone be the basis of an enforcement action against them. The Department’s personnel are to use their discretion and focus the Department’s enforcement resources in a more targeted way.

“I am grateful to the ICE personnel for their candor and openness in our discussions about their critical law enforcement mission,” continued Mayorkas. “The new guidelines will enable our Department to most effectively accomplish our law enforcement mission and, at the same time, advance our country’s well-being by recognizing the invaluable contributions of millions of individuals who are part of the fabric of our communities. The guidelines will help us exercise our prosecutorial discretion to achieve justice.”

Mayorkas is stripping American citizens of their rights by putting them no the No Fly List for being enemies of the Biden regime and forcing employers to mandate their employees take experimental injections from Big Pharma but the rights of illegal aliens are sacrosanct!

Mayorkas said that committing domestic violence should also no longer be considered grounds for deportation in itself:

Drunk driving is also no longer grounds for deportation in itself:

Mayorkas also announced he’s going to be ending the Remain-in-Mexico policy even though a court ordered him to restart it just weeks ago:

Mayorkas emptied the Haitian migrant camp under the Del Rio International Bridge by simply releasing the overwhelming majority of illegal aliens — over 12,000 according to his own numbers — throughout the US.

By his own admission, 1 in 5 illegal border crossers are sick with “illnesses.”

Nonetheless, though perfectly healthy Americans face mandatory covid testing and mandatory vaccines on the orders of the Biden regime, illegal aliens are exempt from both.

Mayorkas is 100% committed to flooding this country with as many illegal aliens as possible.

Mayorkas has filled DHS with people who literally hate our country and our people and declared “white extremists” our country’s greatest threat.