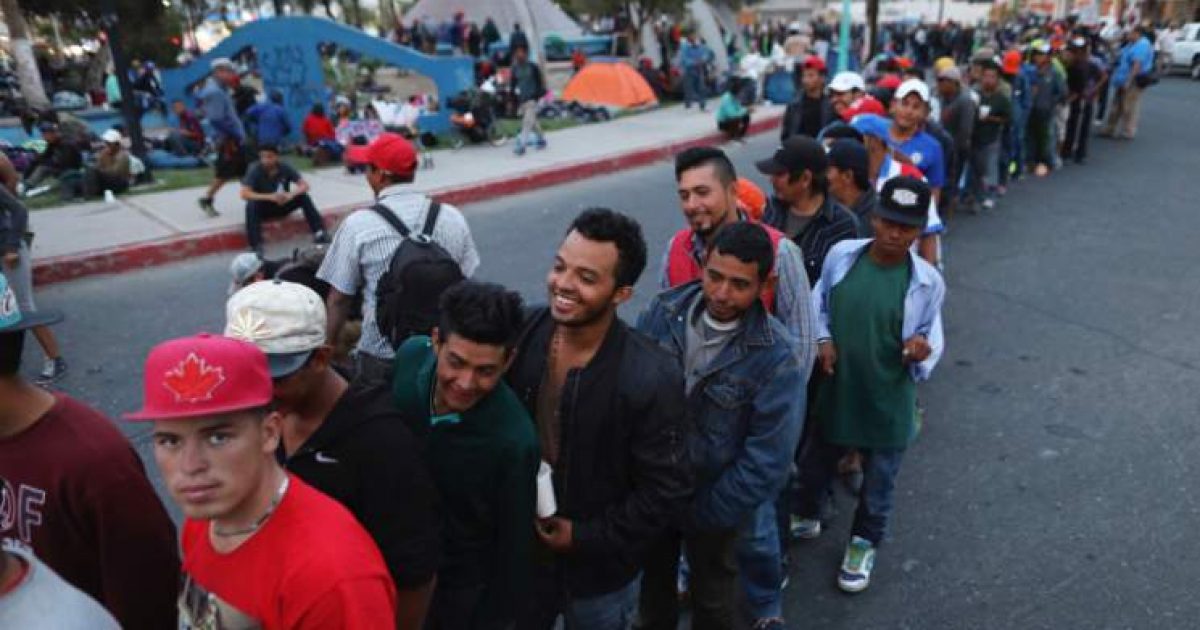 On Monday, the Department of Homeland Security said that there were more than 500 criminals who are traveling in the migrant caravan that are just on the other side of the San Diego border crossing and that there are about 6,000 people in Tijuana waiting to be processed at the San Ysidro border crossing. However, with all of that going on, reports indicate that the troops sent to the border are possibly set to be withdrawn.

More than 500 criminals are traveling with the migrant caravan that’s massed on the other side of a San Diego border crossing, homeland security officials said Monday afternoon.

The revelation was made during a conference call with reporters, with officials asserting that “most of the caravan members are not women and children”. They claimed the group is mostly made up of single adult or teen males and that the women and children have been pushed to the front of the line in a bid to garner sympathetic media coverage.

“All legal options are on the table and we have been negotiating with all our partners in central America with ways to deal with the caravan,” one official said when asked about reports that the U.S. government is planning to make asylum-seekers remain on the Mexican side of the border while their claims are being reviewed.

Homeland Security officials say there are currently 6,000 people in Tijuana waiting to be processed at the San Ysidro border crossing, with more on the way.

“Unfortunately, some members of the caravan are purposely causing disruptions at our border ports of entry,” Homeland Security Secretary Kirstjen Nielsen posted on Twitter. “There is a legal and illegal way to enter the U.S. We have deployed additional forces to protect our border.”

Unfortunately, some members of the caravan are purposely causing disruptions at our border ports of entry. There is a legal and illegal way to enter the US. We have deployed additional forces to protect our border. We will enforce all our laws.

Tijuana doesn’t want these people either and have taken steps to block them off our border.

TIJUANA, Mexico – Officials in the Mexican border city of Tijuana said they have arrested 34 members of the caravan of Central American migrants for minor offenses and turned them over for deportation.

A Tijuana city statement late Monday said the 34 — apparently all men — were arrested for drug possession, public intoxication, disturbing the peace and resisting police, and added they would be deported to their home countries. The main caravan has between 4,000 and 6,000 participants, so those arrested represent less than 1 percent of the total.

Tijuana Mayor Juan Manuel Gastelum has made a point of saying the city is not comfortable with the caravan that began arriving last week, and he compared the Central American group unfavorably with about 3,000 Haitians who ended up in this city bordering San Diego on a failed bid to reach the United States last year.

“The Haitians arrived with their papers, with a clear vision,” Gastelum said in an interview posted on the city’s Facebook page. They came “in an orderly way, they never asked us for food or shelter,” renting apartments and making their own food. He said the Haitians found jobs and “inserted themselves in the city’s economy” and had not been involved in any disturbances.

The Mexican government gave the Haitians temporary transit permits, and after they failed in attempts to enter the United States, many have since applied for Mexican residency. The majority in the Central American caravan have refused Mexico’s repeated offers of residency or asylum, and vowed to cross the border.

The caravan of Central Americans, he said “had arrived all of sudden, with a lot of people — not all … but a lot — were aggressive and cocky.”

President Donald Trump reiterated the sentiments of the mayor of Tijuana and added that the US was not prepared for this invasion either.

“The Mayor of Tijuana, Mexico, just stated that “the City is ill-prepared to handle this many migrants, the backlog could last 6 months.” Likewise, the U.S. is ill-prepared for this invasion, and will not stand for it. They are causing crime and big problems in Mexico. Go home!” he tweeted.

Warren Mass points out a disturbing thing that most Americans know when dealing with such people who seek to enter the country illegally. It goes unsaid, and that is that they will somehow be on some sort of government welfare. In other words, they’ll be living off of us.

A report in The New York Times on November 18 about the arrival of thousands of caravan members in Tijuana cited the city’s mayor, Juan Manuel Gastélum, who estimated that if all of the Central American migrants traveling north come to the Tijuana and seek asylum in the United States, it could take six months for their claims to be processed in San Ysidro.

“We have to wait — for how long?” the Times quoted Lenin Herrera Batres, who joined the caravan with his wife and their two-year-old son from the Honduran city of San Pedro Sula.

“We don’t have the money to stay here for one month, two months,” he said.

The statement by Herrera Batres raises a disturbing question. If the family does not have enough money to stay in Tijuana for a month or two, how does he expect to survive in the United States? Apparently, caravan members consider it a foregone conclusion that Americans will take care of them — at taxpayer expense.

In “How to Solve the Illegal Immigration Problem,” an article posted by the Ron Paul Institute for Peace and Prosperity two years ago, former congressman Ron Paul dismissed the Trump plan to build a wall at our border to keep out illegal immigrants. Instead of a wall, Paul suggested:

How to tackle the real immigration problem? Eliminate incentives for those who would come here to live off the rest of us, and make it easier and more rational for those who wish to come here legally to contribute to our economy. No walls, no government databases, no biometric national ID cards. But not a penny in welfare for immigrants. It’s really that simple.

Ron Paul is right, and always has been on this issue. A wall will simply cause illegals to pursue another path. Many of them already travel underground. The welfare and warfare state drives us only further in debt year after year, and all of it is unconstitutional.

With all of this though, one would think the troops that President Trump sent to the border would remain there till the crisis was over, but reports are indicating that those troops may be set for withdrawal sometime this week.

The first stage of troop withdrawal would primarily consist of engineering units which have finished their task of installing razor wire and physical obstacles at border crossing points – while the original scope of the mission had authorized a deployment until December 15, unless the Department of Homeland Security requested an extension.

In a visit last Wednesday to the Texas border town of Donna, Defense Secretary James N. Mattis said that troops would be finished installing barriers and other initial tasks within a week to 10 days, although he said additional requests for help from the Department of Homeland Security were expected. –LA Times

According to a defense official, officials are discussing whether to grant troops authority to use “proportional” force to protect Border Patrol personnel in the event of violence from the migrants, according to CNN. Troops at the border are currently prohibited from using force except for self-protection.

A decision to permit troops to provide security to the Border Patrol would represent a significant expansion of their mission.

It could also raise questions about whether the mission is in compliance with a U.S. law that prohibits active troops from engaging in domestic law enforcement functions.

The Pentagon had rejected a similar proposal in internal deliberations before the troops were originally deployed in late October, according to the official, who spoke about the deliberations in return for anonymity. –LA Times

The move comes as thousands of Central American migrants arrive in Tijuana, where the locals are not taking too kindly to their neighbors from the South. The migrants, seeking asylum in the United States, may be stuck in Tijuana for months.

I agree that US troops should not be used to enforce the law, which is why I was asking if Trump was prepared to have them fire on these migrants. Constitutionally, this should be the job of the citizen militia, but no one wants to talk about them since they are actually us, and since Congress, the media and pretty much everyone in society wants to demonize the militia as “anti-government. No, constitutionally, the citizen militia is the first line of action to be called upon by Congress under the direction of the president to “to execute the laws of the Union, suppress insurrections, and repel invasions” (Article 1, section 8, clause 15, US Constitution).

That’s who should be on the border, not border patrol and certainly not the US military… that is if you are going to actually follow the Constitution.

Article posted with permission from Sons of Liberty media