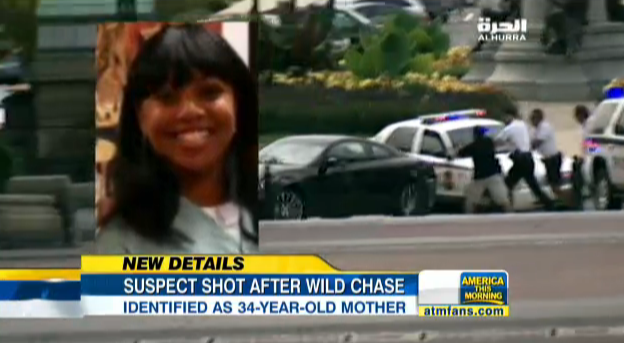 There may be more to the incident of Miriam Carey, the 34 year old woman who was shot dead for breaching a temporary White House barricade back on 10/03/2013, than we ever imagined.

Of course, the official story released by the White House says they had no idea of why Carey tried to breach a barrier at the WH and led them on a high speed chase that ended with them fatally shooting her.

As is seen in the video of the incident, it was anything but a high speed chase, and with Secret Service and D.C. police surrounding Carey’s car with guns drawn before the chase, it is highly likely that this triggered her to attempt to escape.

The bottom line is Carey was at the White House to see President Obama, and in bringing her 1-year-old child along should show us she was bringing her daughter to meet her biological father.

One thing is clear, both D.C. police and the Secret Service had orders to kill her. Both agencies knew she had no weapons from having her car surrounded to when she got out of her car unarmed. Yet, she was shot dead from behind.

There is also the lack of interest from the Administration and the usual race agitators, Al Sharpton and Jesse Jackson, who, under any other circumstances, would have been all over this.

Then, there is the purported father of Erica Francis, a CIA agent by the name of Eric Francis, who goes by several different names and social security numbers. This coupled with the fact that the government held the child and would not release her to Miriam Carey’s parents or family members, who ended up having to go to court to obtain custody, proves to be very suspicious.

The fact that the official story says Miriam Carey was suffering from delusions and her mental state had been deteriorating some 10 months prior to the WH incident is purely government propaganda. Carey’s delusions were said to consist of her belief that President Obama was stalking her, secretly videotaping her, and had her residence bugged.

Carey’s so called delusions may not have been delusions at all, but true fact, considering she would have been scrutinized in this very manner if the President really were interested in keeping an eye on her because he was afraid she would start talking.

Carey’s family and job life just isn’t consistent with what we are being told by the government.

President Obama made several official trips to Stamford, CT, from 2009 to 2012, not to mention trips that may not have been reported.

Judging from what evidence was weighed against the official story, we find that the actual incident makes no sense other than Carey trying her best to meet Obama with her child and the President going all out to make sure she didn’t.

The barricades themselves were more than likely placed there entirely because President Obama knew Carey would attempt to bring their child to the White House soon and not due to an increased terrorist threat, as we were told. He knew this by actually doing what Carey suspected him of doing and she was labeled delusional for it.

In any case, the President of the United States has a responsibility to present himself to the American public as a person of impeccable integrity—albeit, this President has missed the mark more times than we can count. He has the opportunity to redeem himself in the eyes of those who question him by submitting to a paternity test and lay speculation to rest.

I am an established writer with articles in over 20 publications of differing topics Political Commentary Columnist for the Cimarron News Press in Cimarron, New Mexico from 2001 to 2003 generating the controversy I was hired for. I also was a regular writer for several small coastal newspapers in Southern Oregon during the early 1990’s. BOOKS: Aura Visions: The Origin Prophecy, Enviroclowns: The Climate Change Circus, Strange Sounds: A Research Report.